*This giveaway is now closed. Thanks to all who entered and congrats to our winners, Katie and Lubna!

by Jason B. Fischer

As parents, we want our children to be safe, healthy and happy. If we could control them, this wouldn’t be all that hard to accomplish. Unfortunately, those adorable little lads and lasses we love so much have minds of their own, which don’t always know what’s best for them. Drats!

So, what to do about this? How can we, as parents, skillfully guide and protect our children without growing at odds with them? How can we parent in an “enlightened way?”

All parents want obedient children, whether they’re one-year-old or sixteen. Obedience comes from only two possible sources: fear or respect. If your child fears you, he’ll obey you. But will he like you? Will you have a close relationship with him? Absolutely not. So fear, although effective, comes at a cost: the loss of intimacy. This cost can be avoided when we choose a path of respectfulness instead.

If our children respect us, they’ll honor us. When we say, “I’d like to see your grades improve,” they’ll improve their grades, because they will want to give this gift to us, out of respect. But where does such respect come from? It’s simple. It comes from the respect we show them. Our children learn how to treat us from the example we set in our treatment toward them. Only when we show respect do we receive it in return. As such, every interaction with our children matters, from their birth until their teenage years.

It’s quick and easy to instill fear, so many parents default to this approach. Respect, on the other hand, takes greater time, patience and wisdom. In the end, however, the reward is sublime. My own son has just turned one, so in this article I’ll share a few tips for parenting children that are around this age. Regardless, no matter how old your own children may be, the same principles remain.

Tip #1: Working with instead of against.

Adults and children aren’t actually all that different. Everyone wants to do what they want when they want, and to not be told otherwise. If you understand what your child wants at a given time, show that you understand this by giving him permission to do it. Rather than expecting your child to be flexible, be flexible yourself.

If, for instance, your child wants to open all the kitchen cabinets, okay, let him. Save whatever you were doing for another time and open the cabinets with him, supporting his curiosity while making sure he doesn’t snatch up something that might hurt him or break. If he wants to go outside in the cold without being warmly dressed, open the door for him. He’s likely to change his mind when the cold air hits. Or you could pick him up and put him inside your coat while you take a quick walk around the yard. In all, just pay attention to your child’s wants and become an ally in making these happen. Show that you support him.

It’s smart to learn how to control your child without her knowing that she’s being controlled. This is a big part of working with your child rather than against her.

If you try to control your child with phrases like “no” and “don’t” and “stop”, then these might work while she’s young but, as she ages, this approach will certainly fail. Eventually, your child will rebel and assert more and more of her independence. Then you’ll have a real fight on your hands! Yet, you don’t want to relinquish control completely, or end up having your child control you.

That’s why it is so essential to develop the skill of controlling without controlling. Instead, adeptly influence and guide your child’s behavior in a gentle way. The next tips will give you some ideas about how to do this.

For example, if your son has just grabbed hold of something dangerous, don’t merely take it out of his hands – if you do, he’ll probably immediately start crying. Give something just as fascinating and interesting to him instead. Shift his attention in such a way that he does not even notice the removal of the dangerous item. Children have very short attention spans, so redirecting in this way works like a charm. The goal isn’t to stop unwanted behaviors, but to move forward into safe (and enjoyable) alternatives instead.

Tip #4: Not telling your child what to do.

Remember, we’re trying to show (and thereby build) respect. Do you like being told what to do? Not likely.

Our children are no different. Sure, when they’re young, they might not mind, but later they will, I guarantee it. It makes sense to start building a respectful relationship right away, at the very outset of parenting. Instead of telling your child something like “Come give mommy a hug,” for instance, go hug her yourself or open your arms. If she comes to give you a hug, great! If she doesn’t, that’s fine too.  Support your child’s freedom to choose for herself what she wants to do.

Kids are learning machines. As such, find little ways to support your child’s discovery process and independence, rather than over-helping.

For example, my wife and I never put a pacifier in our son’s mouth. Instead, we hand it to him, letting him figure out the rest for himself. Sometimes it’s hard to watch our children struggle when we can so easily lend a hand. But, if we can, they’ll learn from the experience. Find a balance in which you guide them on how to do something new. When our son started to attempt climbing down stairs and off chairs and beds, we instructed “Feet first…” and showed him how. It was amazing how quickly he developed this new ability to safely descend on his own.

This is one of my favorites. Whenever my child falls or bonks himself, I don’t react. Inevitably, he glances at me for a cue on how he should react himself. If I quickly gauge that he hasn’t suffered an actual injury, I start applauding and smiling at him. Ten times out of ten, he smiles back at me, picks himself up, and continues frolicking about his way. Plus, I’m teaching him that it is okay to fall or fail sometimes, that it’s no big deal, just part of life. This lesson is bound to yield countless rewards for years to come.

People often comment about what an extraordinarily happy and easy-going child I have. And, indeed, perhaps I just got “lucky.” Or perhaps I’ve had more than a slight hand in this. In fact, my wife recently said to me, “You know, I think we’re doing a really great job with him.” And, you know what, I agree with her. But enlightened parenting isn’t all that hard, when you understand the principles behind it.

You can learn more about enlightened ways to parent in my book The Two Truths About Love: The Art & Wisdom of Extraordinary Relationships, or by visitingwww.theartofgivingpermission.com. May you live an extraordinary life, and share that life with others. 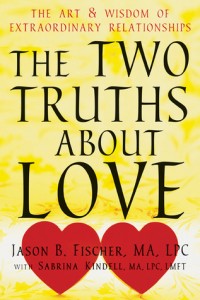 Jason B. Fischer, MA, LPC, is a licensed psychotherapist who has a thriving counseling practice in Austin, TX. He is the clinical director and owner of Plumeria Counseling Center, a facility comprised of over thirty mental health professionals, which he opened in October 2009. He additionally spent an intensive period of time as a fully ordained Theravadin Buddhist monk, before reentering conventional society to “walk the middle path.”

Sabrina Kindell MA, LMFT-S, LPC-S, is a dual licensed Marriage and Family Therapist and Professional Counseling Supervisor. She specializes in family dynamics, parenting and partnering. She has been in an extraordinary relationship with her husband for over twenty-five years and has two grown children.

Do you feel enlightened? If you feel the need for additional enlightenment, Jason & Sabrina will be speaking & signing their new book, The Two Truths About Love on Thursday, February 7, 2013 at BookPeople at 7:00pm.

Would you like to win a copy of The Two Truths About Love: The Art & Wisdom of Extraordinary Relationships by Jason B. Fischer & Sabrina Kindell?

LiveMom is giving away two copies! What do you have to do to win? Leave a comment or fill out the form below. By submitting the form or leaving a comment, you are agreeing to the following terms and conditions: The giveaway holds no cash value. You must be 18 years or older to enter and live in the United States. The winners will be selected on Thursday, February 7, 2013 at 9:00am and will be notified by email with 24 hours to respond.