It’s October, and I’m living with my family in an ancient Moorish neighborhood called the Albayzin, in the miraculous city of Granada, in lovely southern Spain.

But in June I was lying in bed in Austin, Texas, at 3 a.m., staring at the ceiling, wondering if I could really put my children through this move. We were in the last joyful days of school. Every morning I watched my second grader enveloped by all his friends at drop-off, and my fourth grader confidentially navigate the hallways she’d known since kindergarten. I tearfully attended the charming little 5th grade “graduation” ceremony, knowing that my daughter would miss this moment entirely. I was going to pull my children out of their home and drag them 6000 miles away to plunk them into a school in which they would have no idea what was going on.

At least, that was what the ceiling told me at 3 a.m.

To be fair, my kids should understand 50% of what is going on in their new school. They have been in Spanish dual-language since starting elementary at Becker, a sweet, tiny, 76-year-old school in south Austin. It was one of the flagship campuses for the district’s new dual-language program when it started in 2010. Fifty percent of their subjects are in Spanish. So what my children know is science Spanish, American social studies Spanish, very basic language arts Spanish and some classroom instruction (line up, sit down, etc). They play and socialize in English.

Well, that background is certainly better than throwing them in full immersion with no language skills at all. But how will they really survive in a 100% Spanish situation? Will they make any friends on a Spanish-only playground? Will they hate us forever? Why are we even doing this?

The short answer is: we’d regret not taking the chance. We’re very lucky in that my husband’s employers are allowing him to work remotely for a year and I can jump back into my job when we return. Though it’s really all about the timing. Middle school is only a year away. But right now our kids are happy just being with us.  Right now they play together at home and take care of each other at school.  Right now they’re old enough to remember and young enough to go along with a plan this crazy.  There is no time like the present for an adventure, and no one else I’d rather experience it with.

So we dove into the long and exhausting process of getting passports and visas, renting our house, selling our car, packing and storing our belongings, dealing with our pets, finding a house in Spain, enrolling the kids in school, getting plane tickets, and basically putting our Austin lives on hold. Oh, and trying to practice Spanish.

We arrived in Granada a month before school started and put the kids in a half-day language school. After all, they’d been Spanish-free for two months. This helped them refresh their skills and also work on basic conversation (which they don’t teach in science and social studies). It also served to bolster the confidence of our youngest, who assured us that he knew absolutely no Spanish and understood nothing so there was no possible way he could go to school here in September. But after weeks of field trips, activities and excursions, as well as being constantly surrounded by Spanish, the arguing about school dwindled. It also helped immensely that they made some English-speaking friends who would be in their classes with them.

And then the big day arrived. I tried to put on a brave face. The kids looked terrified as they lined up behind the signs for 3rd and 5th grade, despite the incredibly loud and cheerful pop music blaring from the speakers. I introduced myself to our son’s new teacher and explained that he understood a bit, but was nervous to speak. She smiled, crouched down next to him and said, in very slow Spanish, “You don’t need to worry. I am going to make sure you understand everything. We’re going to have a lot of fun.” He may have smiled, just a little.

Meanwhile two 5th grade girls were wandering around, shouting my daughter’s name. When they found her they put their arms around her shoulders and pulled her into a group of girls who were eager to show her around. The look of joy on her face was my answer to that 3 a.m. ceiling.

Now we’re four weeks into the school year. It has gone better than expected, mostly because we were bracing ourselves for the worst. The classroom culture is very different. It reminds me, in fact, of my own elementary school experience: a lot of lecturing, a lot of sitting, a lot of worksheets, kind but strict teachers, and little boys who seem to be testing how often they can make their teachers scream at them. It’s exhausting. The kids come home crispy and grouchy and wanting only to read English books and watch English TV. Our rules for screen time have become fluid here. We know they are working really hard and their brains are fried. Loads of ice cream also soothes the angst. I’m okay with that, much to the shock of my family.

But sometimes the ice cream, the extra TV, the encouragement, none of it works. They’ve each had moments when they can’t take how much they don’t know, can’t deal with the differences in culture, can’t figure out if kids are laughing at them or just near them, can’t understand why the teacher was angry. And then they hate Spain, hate school, hate us for bringing them here. It’s heartbreaking because, yes, it’s my fault. This is all my fault.

And then… they manage to explain something to their teacher in Spanish. Or run around the corner to order bread at the panaderia. Or have a little conversation with a kid in class. Or join the local soccer team. Or get to stay up late playing in the plaza with the neighborhood kids while the grown-ups sit around sipping tinto de verano, because that’s what happens here in Spain. Yes, they’re learning Spanish. But they’re also learning resilience. They’re learning they can accomplish more than they thought. They’re learning that the world is big and overwhelming and strange and hilarious and amazing and that people are generally kind. This is what keeps me from folding in the face of the heartbreaking days. Maybe I’m not the worst mother ever.

How are the grown-ups dealing with the culture shock? That’s another story…

About the author: Cheris Lifford has lived in the northwest, the northeast, and the Far East, but moved to Austin in 2001. Currently she and her family are spending a year in Granada, Spain. She is blogging about the experience at: www.yAhoraQue.org. 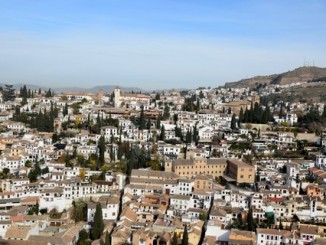 6 Comments on Adventures In Spain: An Austin Family Spends A Year Abroad