We’re thrilled that Skye Kilaen joined us on our quest! Last we heard from her, she and Boy Detective took a photowalk at Zilker Park and the graffiti wall. This time, they headed out for a sweet treat. Here’s what she shared about that experience:

We’ve done a lot of active and outdoor items on our Bucket List so far, but this month we’d been to the ER at Dell Children’s twice, so we needed something calm! We hadn’t listed CoolHaus on our bucket list initially because we thought we’d do a “best vanilla cupcake of Austin” quest first… but having sampled the ice cream sandwiches from CoolHaus at the ice cream festival last year, we decided to go off the list this time.

CoolHaus ice cream is available in some stores, but they also have a trailer at the Midway Food Park out on 360, so we headed there.

We picked out our cookie flavors and ice cream flavors from the menu (which changes seasonally):

And they started handing us ice cream sandwiches, with edible wrappers:

If that looks little, the photo is lying to you. These things are huge. They come with a spoon in them for a reason!

I know it sounds like a production, but it’s worth it! These things are amazing. Boy Detective had the vegan ginger molasses cookie with cream cheese ice cream that had chunks of red velvet cupcake mixed in. I had the same cookie, but with the salted caramel ice cream. And C-Man had the gluten-free coconut almond cookie with key lime pie ice cream. Aside from the unexpected chocolate in the coconut almond cookie, we were all thrilled with our choices.

Boy Detective was absolutely taken with the edible paper wrappers and stole mine and his dad’s so he could keep eating them. I don’t know if they were tasty themselves, but they were all covered with ice cream, and he was eating paper! Totally freaky!

Midway is a great place to take kids anyway, because it has plenty of shaded seating and also a playground. I somehow did not get a pic of that, so here’s a bitty one from Midway’s website:

If you go to CoolHaus, bring cash! They do theoretically take plastic, but they have trouble with their service sometime. Here’s the pricing:

If $5 per person is too much for dessert, consider splitting each one between two people. No one is going to go hungry.

One of the great things about Austin is that in October, it’s still not too late to enjoy a “summer” treat like this. So get over there and have one! 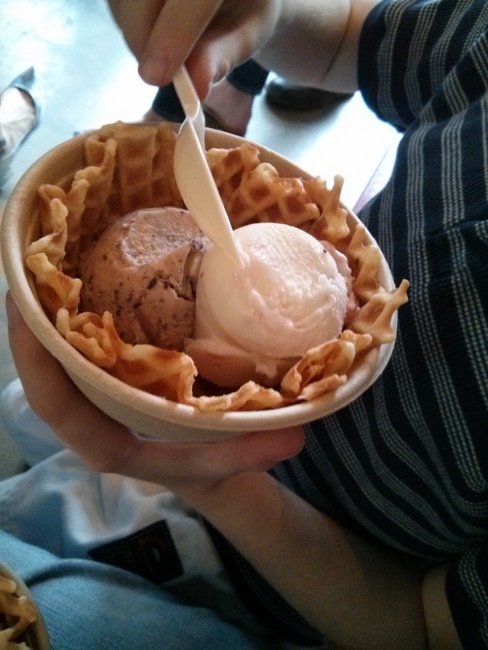