We’re thrilled that Traci Shannon joined us on our quest! Without further ado, here’s her report on her sixth”mission”:

This piece could be called “How to Not See the Bats Under the South Congress Bridge”. Well, almost. We had planned to see the bats as a family on Monday evening. My son, however, twisted his ankle on Saturday, landing him on crutches. Then, my daughter got a terrible head cold and cough. I, however, was dead-set on seeing the bats before the time change. So Dad stayed home and this Momma headed out on her own.

Things did not go as planned. They rarely do.

First, I had read online that there was free parking at the Austin American-Statesman parking lot. I pulled into the lot to find a big sign that said otherwise. Big, BIG sign. I saw others doing it and strongly considered parking there, but I chickened out.

So I began the downtown Austin parking hunt. I circled and circled. I passed many lots that threatened towing as prominently as the Statesman. Part of me wondered how many bat viewers they could really catch but again, I chose to keep moving. After ten minutes, I found street parking about three blocks away.

At this point, the sun was nearly flush. Whoo! Just in time, I thought. Having read that they come out after sunset, I rushed past other walkers thinking that meant “right after sunset”. This also influenced my decision to buy one hour of parking. 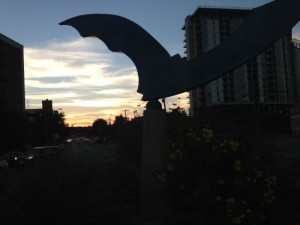 I walked like a crazed chicken across the Congress bridge, terrified that the bats would fly away without me. I made it to the lawn next to that aforementioned Statesman lot and found many viewers leisurely sitting on the grass. Oh yeah. I forgot a blanket. And… bug spray. 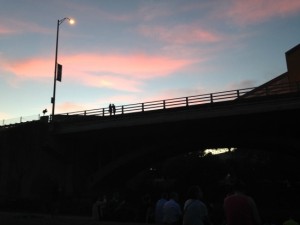 Nonetheless, I made it. The sky turned a beautiful pink and I was ready for bats. Except that the bats didn’t come. Soon thereafter, a very nice gentleman informed me that it would be at least 45 minutes. I remind you — I bought a one hour parking sticker. And I am wearing a skirt with no blanket or bug spray.

But after my disappointing attempt at Trailer Food Tuesday, I was intent on a full check on my Bucket List. So I sat…and sat. I did a little people watching. I dozed a little. I watched as the sky turned from pink to purple (a really beautiful view against the skyline, I must say).

I checked the time and at 7:30, I was faced with a decision. Should I risk a ticket, or miss the bats?

Knowing I had both sick and injured little ones waiting at home, I stood up. I grabbed my purse, ready to leave disappointed. But then a red light streaked across the bridge arches. 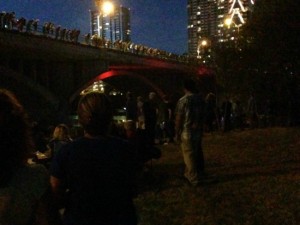 At first, there was nothing. Then they came out. Thousands of tiny bats danced in the red light. They were smaller than I imagined, but not a bit less impressive. I wished I was closer to the water (yet another lesson for next time) but at the end of the night, I was glad that I had ventured out.

And here’s the best part. I didn’t get a ticket. I got back to the car with one minute to spare. With a head full of “How to Do This Better Next Time” lessons under my belt, I headed home with a solid check on my Austin Bucket List.

On to the next Austin adventure…

Traci Shannon is a former actress turned military wife, SAHM, and hopeful writer. She spends her days trying to catch up with that life that happened while she was busy making plans. You can read her adventures at A Star in My Own Universe.[