We’re thrilled that Traci Shannon joined us on our quest! Without further ado, here’s her report on her first “mission”:

I am so excited to begin my Austin Bucket List adventure. I have lived in Austin for four years now and there is so much I haven’t done. People come to this city from all over and yet I’ve never been a tourist in my own city. So here’s to the spirit of exploration!

This month, I decided to actually attend SXSW, which like many Austinites I have avoided as the proverbial plague. With an opportunity to attend a Jimmy Kimmel taping, I started small. Or so I thought! 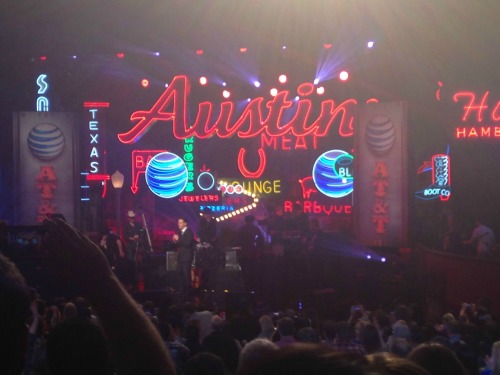 We headed down to the Palmer Events Center and began the first ritual of SXSW attendance – PARKING. Aack! We started with the lot next to the theater and it was full. Across the street from the Palmer Events Center parking, we saw a sign for $30 parking at a BBQ place. My husband and I looked at each other and said surely we could find better parking than that. We began the hunt. Up and down we drove; side to side. We found cheaper lots but they were full. Further out we went and still no luck. Needless to say, we ended up 45 minutes later back at the $30 lot. 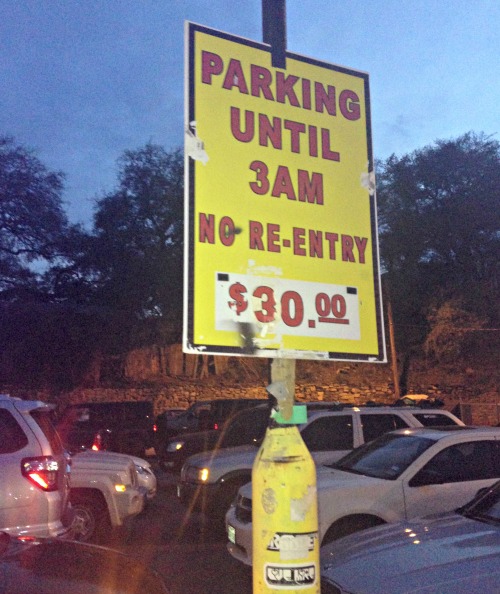 To add the necessary irony – as we walked past, the Palmer Events Center Parking lot ($10) reopened. We had to laugh! We certainly got our initiation into the SXSW club!

We then began the second ritual – WAITING.

Herded through wrapping lines outside into the large foyer of the Palmer Events Center, we waited among the many, many others to enter the auditorium. Wristbands dangled from wrists and tickets were held almost as tightly as cell phones.  Finally, the doors were opened and we flooded in.

Immediately, my eyed went to the stage. I loved how they created a stage of Austin landmarks. 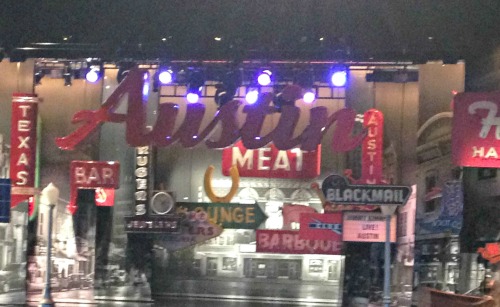 The show was great. Jimmy Kimmel did not disappoint. He did a hilarious tour of UT and of course, he joked about our amazing food offerings. 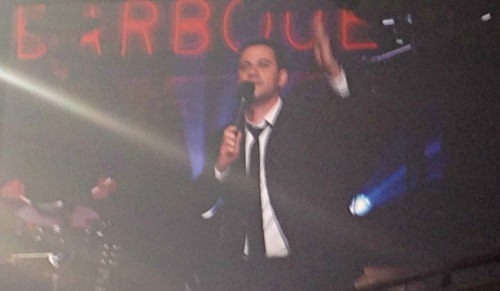 That, however, is not what made it my true SXSW experience. Because if it’s not live music, it’s not SXSW. My husband and I had been excited when we learned that Willie Nelson would be a guest. We knew that he would perform but we had no idea!

Willie Nelson was the last guest. He played one full song, “Roll Me Up and Smoke Me When I Die”. We went to commercial break and then he sang us out. Okay, great. How cool was that? 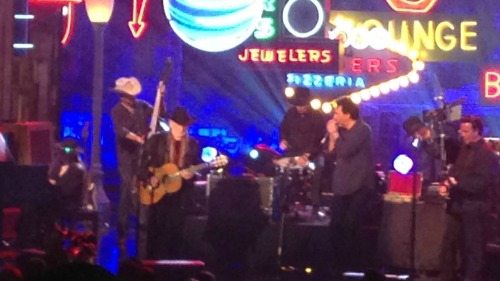 Because he stayed and played another half hour! Woo to the Hoo! We just got a free, intimate concert with the heart and soul of the Austin music scene. Heart and Soul!

With the parking and the crowds, I might have said I got a taste of SXSW. After seeing Willie play, I now can say Austin Bucket List item, SXSW – check! And I now feel brave enough to venture back  for the full experience – wristbands, and all. 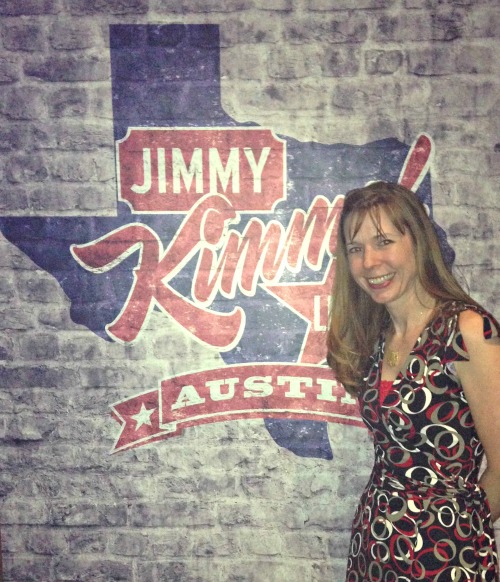 [author] [author_image timthumb=’on’]http://www.livemom.com/wp-content/uploads/2014/03/Traci-Shannon.jpg[/author_image] [author_info]Traci Shannon is a former actress turned military wife, SAHM, and hopeful writer. She spends her days trying to catch up with that life that happened while she was busy making plans. You can read her adventures at A Star in My Own Universe.[/author_info] [/author]
[facebook]
[retweet]