Founded in Philadelphia in 1998, the School of Rock now has 105 schools in cities around the world, including Austin. The curriculum emphasizes the roles of performance and collaboration in developing musical talent. Students pick an instrument (or, more than one), take private music lessons taught by local musicians and participate in group rehearsals, with the idea that when they are ready, students will take to the stage.

The Austin School of Rock opened its doors in a warehouse in Pflugerville in 2004 and now makes its home at Northcross Mall. About 160 kids between 6 and 18 years old currently participate in School of Rock programs, including their newest program for preschoolers, Little Wing (which will be at Austin Kiddie Limits during ACL). Show seasons are 12 weeks long. Students begin with Rock 101, where they have a chance to learn a few classic rock and roll tunes in a group setting. The experience is largely customized to meet the needs and interests of each student. The Austin School of Rock also has an adult program which meets on Monday nights, after the kids’ lessons are over.

Colleen Bell, the School of Rock’s Regional Manager, says the biggest change she sees in kids who attend School of Rock is in their confidence. “It changes the way a child walks. It changes the look on their face. Not just when they are in the school, but when they are talking to their friends”. The camaraderie among the musicians is also a huge benefit, according to Colleen. “Having a community outside of school that you always have something in common with, always have something to talk about, is really reassuring, especially to teenagers.”

For the sixth year, the Austin School of Rock has been invited to perform at ACL. Colleen explained that the 11 students performing at the Festival are part of the School’s B Team, a select group which is chosen by audition twice a year. These musicians perform together 2-3 times a month at music festivals and other gigs in the area. We had the chance to sit down with three members of the B Team on the first day of ACL to talk about why they enjoy performing, who they want to see at the Festival and what it’s like to grow up in the Live Music Capitol of the World.

The three members of the School of Rock’s B Team we interviewed, all who are 17 years old, are Rozie Castoe, bass, who attends New Hope High School; Alanna Malcom, vocals, who attends Georgetown High School and Bryce Martinez, guitar, who goes to Vandegrift High School.

LiveMom: How long have you been making music?

Bryce: I started playing guitar when I was about 11, about a year before I decided to come to the School of Rock. I’ve been playing ever since, so, about 6 years.

Alanna: I’ve always sang, but I didn’t start playing guitar until I joined the School of Rock.

Rozie: John Paul Jones from Ledd Zepplin. He is an extreme influence on me.

Alanna: I would probably say Janis Joplin. She has an amazing voice – really different. I’ve always looked to her as inspiration when it came to singing.

Bryce: To avoid sounding like a cliche, Gary Moore is one of my favorite guitar players. I absolutely love his playing. It’s so soulful and he doesn’t just try to shove every note into every solo he plays, so he’s an inspiration.

LiveMom: Who are you looking forward to seeing perform at ACL?

Bryce: I’m so excited to see Portugal the Man here. I love every album they have made and I haven’t gone to see them yet.

Alanna: Queens of the Stone Age is really good live and they put on a good performance, so I’m excited to see them.

Rozie: I’m excited to see some of the older bands, Depeche Mode and the Cure. My musical tastes tend to be stuck back in the 70s and the 80s.

Alanna: I just like playing. It’s something that’s always come naturally for me. It was natural, but there was still so much that I had to learn. Every time I feel like I play, you kind of learn something. It’s nice playing with people like them (points to other kids) because they are really good people to play with. They always teach you something.

Rozie: For me, the stage is something almost like a second home. I feel really, really comfortable up there. I feel like I can really come out of my shell, and be a completely different person than I am in everyday life. Playing music is what I love to do more than anything. It is my relaxation. It is something I have passions and drives for. It is me. It’s everything that defines me and everything that I do.

LiveMom: What do you think is different about being a musician in the Live Music Capital of the World?

Rozie: Being able to just be around so much music is such an influence because literally we can go out any single night of the week and see a band. That really keeps you on your toes because it keeps you involved in what’s popular in the area — what people are liking — if you really want to make something out of it, what types of stuff you should be going for.

But it’s also an inspiration. I’ll go to shows and I’ll see people playing and I think, I don’t want to be here. I don’t want to be in the crowd. I want to be up there playing. So having that musical element has really made me a better musician and made me want it a whole lot more.

LiveMom: How do you feel like your musical style has evolved?

Bryce: One of the things I like about School of Rock is that before I came here I would listen to all the same classic rock bands that every kid guitar player wants to listen to, like Jimi Hendrix and AC/DC. So I was kind of pigeonholed into that. But then you come here, and there people from everywhere. There’s so many different kids here that listen to so many different bands and the teachers all have their own unique bands — there’s teachers playing metal, there’s teachers playing country, there’s teachers playing indie. So you get a melting pot of all these musical tastes. So, you start to want to listen to those and you start to want to play those. Coming here has made me get out of where I was stuck, and it did help me start writing my own stuff and find myself, I guess.

Rozie: As a person, the School of Rock has really helped me socialize, because it’s an afterschool program and a lot of my friends are not at school, but at School of Rock. I have to say that School of Rock really helps pretty much everyone make a huge group of friends and especially for us, being on the B team our show team we’re almost like a family because we spend so much time together.

Alanna: A lot of the people that are on there have been on there forever, so we’ve known each other for a long time.

It’s clear that these kids are incredibly talented and poised, but we’ll just have to wait to see where they go next! 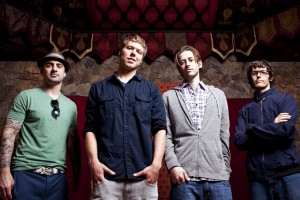 Where to Eat, Drink and Relax During ACL