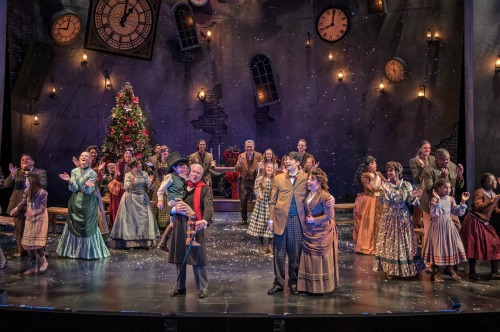 Somehow, we had never made it to ZACH Theatre’s A Christmas Carol as a family during the holiday season, despite the fact that it is the most popular show in ZACH’s history. This year, I took my 9-year-old son to a performance on a Saturday evening. Here are five things you should know if you are considering purchasing tickets or want to know more about this year’s production:

The modern twist on the classic tale engages all ages.

One reason we had not taken my son to A Christmas Carol is that my husband and I remembered it as being slow-moving, and we were worried that the play wouldn’t hold my son’s attention. It took only a few minutes for my concerns to be allayed. David Steakley and Allen Robertson and the rest of the production crew have integrated modern, hit songs (like one of my son’s favorites, “Best Day of My Life” by American Authors) seamlessly into the Dickens tale in a way which keeps you on the edge of your seat, wondering what’s up next. My son, along with many other members of the audience, was literally dancing in his seat during a few numbers, singing along. At the end of the performance, the festive atmosphere in the theatre was palpable and uplifting. 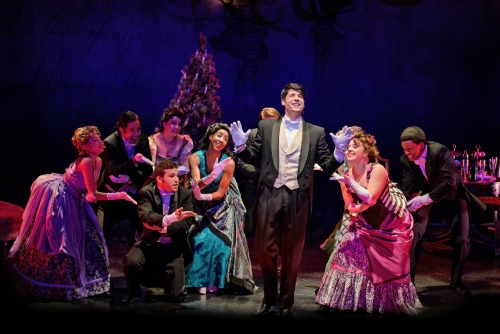 The acting, vocals, costumes and choreography are all first-rate.

I have come to expect top-notch acting and flawlessly-put together musical numbers from ZACH, and A Christmas Carol was no exception. I marveled at how the actors could execute such elaborate dance routines while singing. What a talented cast! My son and I enjoyed looking through the program before the show started to read the bios of all the child actors in the production to guess if they were older or younger than he is. It was also my first time in the Topfer Theatre, which managed to feel intimate while large enough to accommodate a good-sized audience. 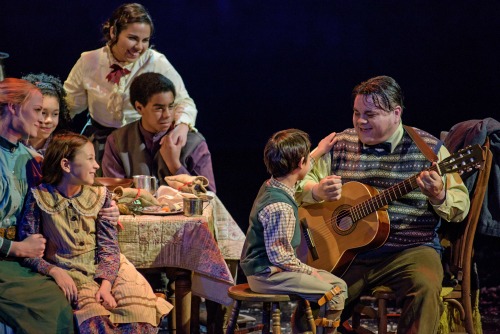 The message of the importance of family and community over material goods is timeless.

Every year, I feel that we, and parents especially, struggle to find a balance between our children’s love of getting things and the true spirit of giving during the holiday season. Dickens’ message that we all have the capacity to be transformed by the magic of the season is just the antidote for the sadness many of us feel in the face of recent world events. We leave the play thinking of Ebeneezer Scrooge’s famous line:  “I will honor Christmas in my heart, and try to keep it all the year.” 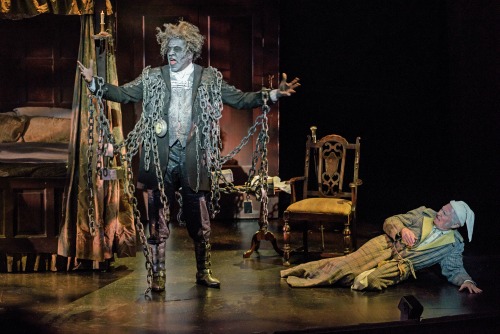 The run time is over two hours, with an intermission.

The production is recommended for ages 5 and up, and there were plenty of children around that age at the Saturday evening performance we attended, decked out in their holiday finest (while others wore shorts without the fear of feeling underdressed, since this is Austin, after all). I wondered if the youngest patrons were at all frightened by the ghost of Marley or the Ghost of Christmas Future, so that might be something to prepare your children for if they may be scared. The run time is 2 hours, 20 minutes, including one 20-minute intermission, which means that our 7:30pm show let out after 10pm. My 9-year-old did fine, since the production was fast-moving, but you might be prepared for most fidgety kids to have some problems sitting still for that long. 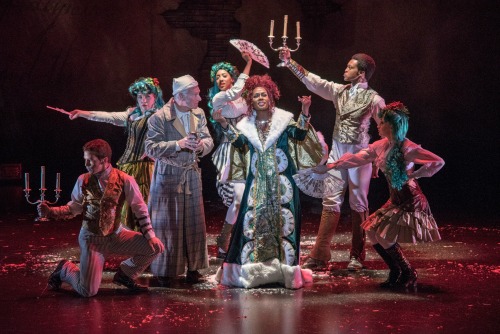 You can support ZACH’s educational programs at the performance.

When we entered the theatre, I quickly noticed that the ushers had white light saber-esque foam cylinders in their hands to direct ticketholders to their seats. At the start of the performance, a cast member explained that we had the opportunity to donate $25 during intermission to receive one (or $50 to receive enough for your family), all which go to support ZACH’s educational programs. You can fill out an envelope in your program and take it to any usher and use the light stick at certain parts of the second part of A Christmas Carol. It’s nice to combine the play’s message with the opportunity to give, although if you would like to do so, you will want to make sure to be ready to dash out to the exits at the start of intermission, especially if you also would like to use the restrooms, since the lines can be quite long. I also noticed some parents having trouble during the second half making sure children only used the light sticks at the appropriate times, so it might be wise for parents to hold onto these and hand them out at the right moments.

It was clear when the show came to a close that the rest of the audience enjoyed A Christmas Carol as much as we did. I think we may just have another new family holiday tradition.

A Christmas Carol runs until December 27, 2015 at the Topfer Theatre at 202 South Lamar. Ticket prices start at $25/person. On Sunday, December 6 at 2:30pm, there will be a sign-interpreted performance. 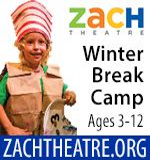