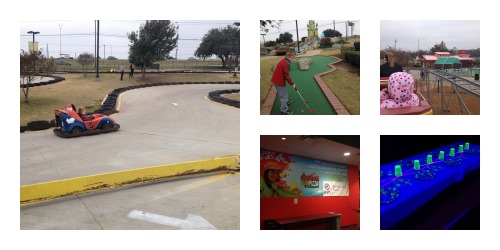 I’m always on the lookout for fun outings for my seven-year-old son and I. Now that he’s gotten older and he can “hang” for longer, I’m more willing to pay to go to places where we can do a lot of things in one location. That said, I’m not a huge fan of Chuck E. Cheese’s and other places with lots of flashing lights and noise. It just tires me out.

One of the places I’d been curious about was Austin’s Park, located in Round Rock right off IH-35. I’ve driven by, but I guess since I don’t live too close, I tend to forget about it as an option. So, I was excited to be invited to check out the improvements Austin Park has made in celebration of its 10th year of operation.

What I found out is that Austin’s Park is 23 acres and has 55,000 square feet of indoor entertainment for families, adults and corporate teambuilding. When you enter, you purchase a wristband which allows you unlimited attractions, plus access to the pizza buffet, dessert and drink area. The batting cages and arcade are pay as you go.

We had the chance to take a tour of the Park, see the upgrades and try out the attractions. Since we hadn’t been before, I can’t really speak to the upgrades, but I learned that the food, arcade games and the laser tag arena all were spiffed up. The Park added “slick track” go-karts and added in a game card system for the arcade so you can use a card in addition to tokens. The management paid specific attention to the three to 9-year-old set, and added in attractions to suit this age group. Austin’s Park also now offers a loyalty and rewards program and expanded birthday party offerings.

Here’s what we liked about Austin’s Park:

We spent a full five hours at Austin’s Park, which is pretty good for us. In terms of negatives, I’d say it can still add up to be a pretty expensive outing, especially if you have several children. Adults are required to pay for admission, which can be a bummer if you were hoping to just watch your kids play. I’m not sure how uncomfortable it is to do the outdoor attractions during the summer, since we went on a chilly day (although the management is increasing shade as part of their upgrades). I’m also not sure how crowded the attractions get during the summer, and what wait times look like. We waited for about 10 minutes for the go karts, which seemed more like an hour because of the chilly wind, so long wait times for rides would certainly take away from the experience.

I’m definitely glad we tried it out and my son is eager to have the chance to go back. Just crossing my fingers that we have as much fun returning during summer vacation, as that might be our next chance to visit again!

Have you been to Austin’s Park? Any other tips on making the visit fun? What’s it like during the summer?

Disclosure: Austin’s Park provided us with wristbands and provided my son with a funcard to the arcade so he could play while I was on the tour. LiveMom did not receive compensation for this review, and the opinions expressed herein are my own.