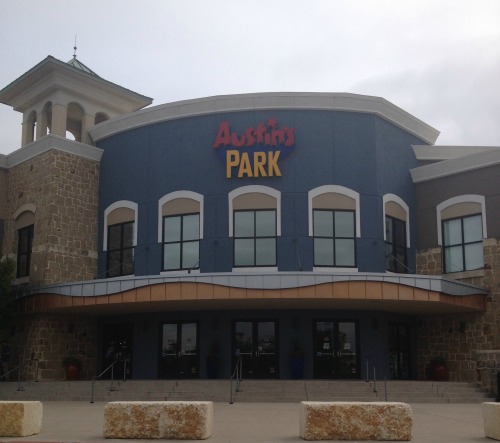 As we reported last year, Austin’s Park celebrated its 10th “birthday” by investing over a million dollars to upgrade the facility. Improvements included new floors, new games, new go karts and tracks, new TVs and more. The company looked at the whole customer experience, and even added small touches such as fresh flowers in the women’s restroom.

As part of a continued effort to improve food offerings, Austin’s Park is experimenting with different pizza recipes and taco fillings. Bloggers were invited to the Park on July 18th to offer opinions on the new food options and to get a front row seat in Austin’s Park’s own version of the reality cooking show Chopped.

Three teams, composed of a chef and with the surprise addition of child sous chefs, were given 20 minutes to create a flour and gluten-free pizza with ingredients provided, and judges selected their favorite. The winning chef was able to designate a $500 donation towards his favorite charity, and the winning sous chefs won a birthday party package.

We had last visited Austin’s Park on a chilly December day, so we had a great time rediscovering what the park had to offer. After spending time at the arcade playing a few traditional games (think skee ball) and checking out some of the new games, we headed outside. Thankfully, it was a cloudy day, so we didn’t have to worry about the sun or heat at all. We played one of the golf courses, and both my son and I noticed that it had been spruced up, although we couldn’t really put our finger on anything specific. Then, we headed inside for a drink and came back out for the Bumper Boats, which looked really fun, but definitely something you can get quite wet doing, so I opted out while my son stayed for three successive rounds. From there we did laser tag, which was our longest wait of the day, but was still not too crowded. Then, I went on the go karts (not the fast track, as I’m not a big adrenaline junkie) and had a blast while my kid did the Bumper Boats YET AGAIN.

After cashing in our arcade card for some prizes, we were both ready to head home. Another fun day at Austin’s Park!

Disclosure: My son and I were provided free samples of the possible new menu items, wristbands to enjoy the park for the day and $5 gift cards to the arcade. LiveMom did not receive compensation for this post, and the opinions stated herein are my own.