If you caught my post last week, you will remember that Austin is largely responsible for the world-wide rebirth of women’s roller derby. Part sport, part social and all about empowering women, derby is also a place moms connect, reclaim their bodies and have fun.

Although both the banked-track and flat track leagues have moms who participate, many mamas first don their skates to participate in the Rec-N-Rollerderby, which is affiliated with the Texas Rollergirls, who skate on a flat track. The Rec-N-Rollerderby was actually an outgrowth of an all-mamas amateur league formed in 2006, the Austin Roller Moms. The first season, the Roller Moms had 20 skaters. Having experienced tremendous growth, the Rec League now introduces about 80 women a year to the sport of roller derby. 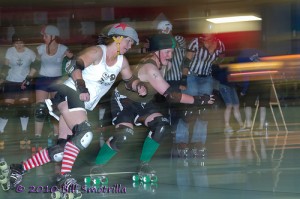 The Rec League is now roughly half moms. Some of these mamas have older children, and some are still nursing (one brings her baby and her mother’s helper to practice). One skater has five children, and one team has a mother-daughter duo, both of whom are planning to try out for the competitive league. The League hires a babysitter to watch children during practices, which is an incentive for many mamas to participate. There is also a Junior Derby team for girls ages 8 to 17, and the daughter of one Rec League skater is one of the skaters.

As you can imagine, there are many reasons these mamas joined roller derby. MamaKaze had recently moved to Austin and was buoyed by the birth of her son, which “made me feel like I could do anything.” Obi Mom Kenobi, another Rec League skater, was encouraged by neighbors to join. Some mamas, like Sinnerfold, loved roller skating as a kid and the opportunity to learn a new sport.

It didn’t take the mamas I talked to long to get hooked. Obi Mom said joining the Rec League was “a life-changing experience”. Many mentioned the amazing people they had met through derby. MamaKaze was able to hone her leadership skills as a board member. One skater pointed out she is now in the best shape of her life. Yet another, a skater in her her early forties, feels liberated that she can now shift the focus to what her body can do, rather than worrying about how she looks. Sinnerfold said, simply, “I would love to play forever”. 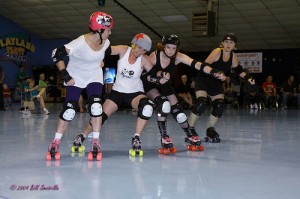 The biggest obstacle most moms face when joining roller derby is time. The Rec League has practices twice a week and games (called scrimmages) once a month during the season. Scrimmages are held on Sunday mornings, when families can attend. Optional training sessions are also offered, and skaters are encouraged but not required to attend fundraisers and other league events. The competitive league requires a greater time commitment.

So, what about injuries? None of the skaters I spoke with had experienced any significant injuries (knock on wood!), but skaters can be sidelined with anything from bruises to pulled muscles to broken bones. There are a few safeguards the league has in place to protect its skaters. First, skaters are required to purchase supplemental insurance through the league. All the skaters spoke very highly of the trainers, which lead mandatory primer sessions to take novice skaters through the basics of safely skating, turning, falling and stopping. Skaters are also required to have a full set of gear, which includes knee pads, elbow pads, wrist guards, helmet and a mouth guard. Although injuries do happen, one mama reminded me that you risk injury when you play in any sport, and that derby is no different. 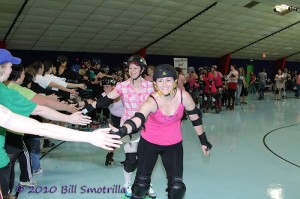 Likewise, the skater mamas I spoke with didn’t feel the sport is violent. Obi Mom said, “I don’t perceive what we do as violent at all. I perceive it as a sport – just like any contact sport (football, hockey, lacrosse) – there is physical contact. But the intent of the contact is not violence but strategy…The goal isn’t to go out and hurt people and knock them down, but to play the game smartly and get the most points.”

To find out about upcoming scrimmages and bouts, to learn more about tryouts and to read about the competitive league, check out the TXRG website.

Special thanks to Austin Mamas, Robin Benson Barnes and Wendy Salome for making this post happen, and to Bill Smotrilla for sharing his derby photos.