As you are well aware, February is Austin’s coldest month. Granted, we will be complaining about the heat in just a matter of weeks, but for now, it is C-O-L-D. So I realized this month would be the perfect time to check out the Flying Theater Machine, a kids’ improv show which takes place every Sunday at 2pm at the Hideout Theater downtown. 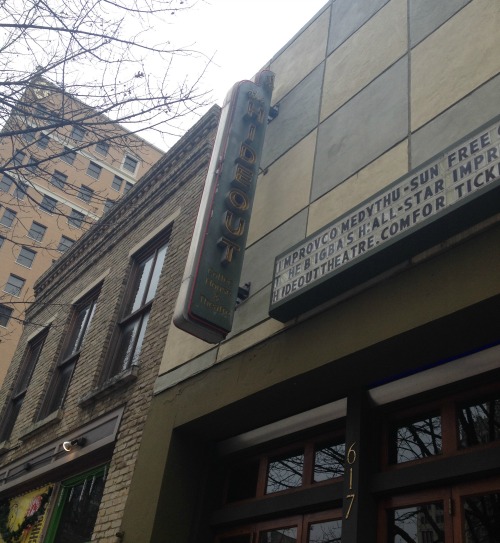 We’ve been to What’s the Story, Steve?, the kids’ improv show put on by Move Your Tale. My kid is a very think-outside-of-the-box kind of dude, so the idea that he could create the story was very appealing. He also went to one of Move Your Tale’s summer camps, although he seemed to be more interested in the idea of telling other people what to do than acting himself. But that was a few years back, so I was curious to see what he would think of the Flying Theater Machine.

As I mentioned, the shows take place every Sunday at 2pm. You can purchase your tickets online, and the website suggests doing so, but we opted to buy ours at the door (there is no price difference). Tickets are $7 a person. It is nice that metered parking is free on Sundays, and we found street parking pretty easily a few blocks away from the theater. 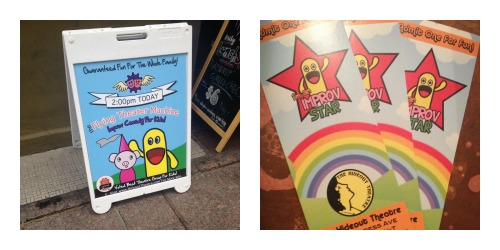 Since the Hideout is also a coffee shop, you can purchase snacks and drinks and bring them inside the theater. Since we nearly froze on the three-block walk from our car to the theater, we opted for some hot chocolate and my kid scarfed down a thick slice of zucchini bread. We arrived probably 10 minutes before the show was to begin, and that gave us plenty of time to get our provisions and find a seat in the 49-seat theater. Mats were placed in front of the first row of seats and children were encouraged to sit up front to better take part in the action. My kid wanted to sit with us, but in the end he ended up on my lap part of the time, because he had a hard time seeing above the adult sitting in front of him. 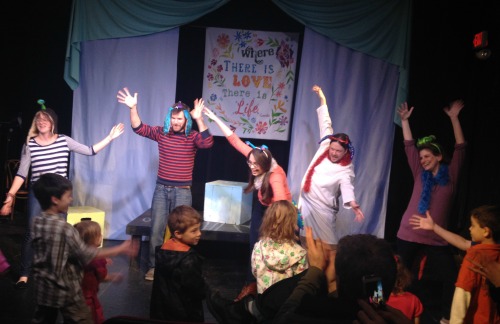 The shows have a theme that changes every two months. During our visit, it was Monster Families. We got a chance to meet the whole Monster Family during the show and learned that monsters are actually scared of humans. The audience consisted of mostly the under-6 set, along with parents and grandparents. There were probably two dozen or so of us in the theater (although, keep in mind, this was one of those days most sane people chose to be inside because of the frigid temps). My almost-8-year-old was probably one of the older kids there, although he didn’t notice nor mind. He was preoccupied with shouting out his ideas (very loudly, partly in my ear) whenever one of the Monsters had a question for the audience.

The show lasted an hour. It seemed to go by relatively quickly. I’m sure my kid could have stayed another half hour, although some of the younger members of the audience might have gotten fidgety. The actors invited the kids to come up after the show to ask questions, and many of the children took them up on it (mine had a long talk with Mother Monster about pets). They also mentioned that the Hideout offers classes and camps for kids and improv for adults. 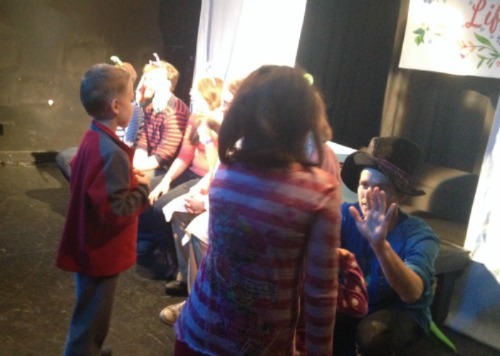 As we walked away, my son said, “She did a pretty good guinea pig impression!” He excitedly told his grandparents that he liked it “because they used all my ideas.” He laughed, remembering the war between the guinea pigs and the zebras. He will always say he’d prefer to stay at home than go most anywhere, so I was happy to hear he had a good time.

I’m glad we finally made it to the Flying Theater Machine. I think it’s perfect on days it’s really cold (or really hot) and there isn’t anything going on downtown, so parking won’t be a hassle. I think it would be a great thing to do with grandparents, and you could easily combine the show with a visit to the Capitol, the Contemporary or another attraction downtown. The ticket price is a little high, considering we can see What’s the Story, Steve? close to our house and it is pay as you wish. All in all, a great excuse to get out of the house on a cold and windy day and give my child the chance to call the shots.

Have you been to Flying Theater Machine? What do you think of our Bucket Lists? Anything we’ve gotta add to them?