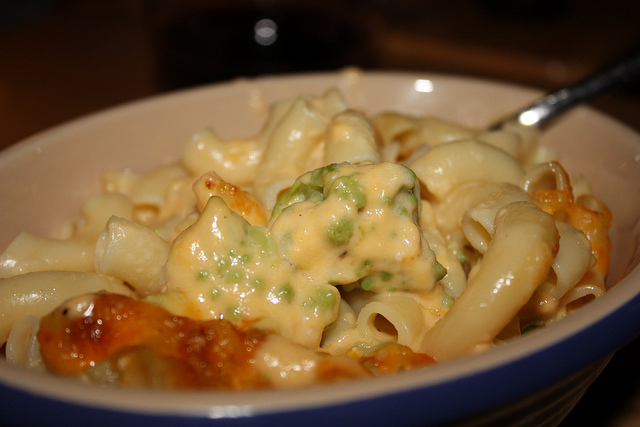 Who doesn’t love mac and cheese? I am an absolute devotee, and of course it’s a “kid food” staple. Although the bright-orange thoroughly-Krafted version is always an option, I prefer mine from scratch. The good news is that, as long as you have the right ingredients on hand (pasta, cheese, milk and butter), it’s just as easy to throw together a quick stovetop mac and cheese as it is to make the boxed kind.

Macaroni and cheese doesn’t have a reputation as being health food, even when made from scratch, but if you use whole wheat pasta, it amps up the nutrition a bit, and, as I have long held, cheese is the tastiest protein. I’ve started incorporating veggies into my mac and cheese to make it a one-dish meal, and it has been a hit with everyone in our house, including the toddler.

This time of year, cauliflower is coming into season, and it will be plentiful at the farmer’s market and in CSA boxes before we know it. There are so many beautiful varieties — orange cheddar cauliflower, weirdly geometric romanesco and brilliant purple cauliflower as well as the good ol’ white stuff we all know and love — and, while it might be a little bland on its own, there are plenty of tasty ways to make it the centerpiece of your meal. 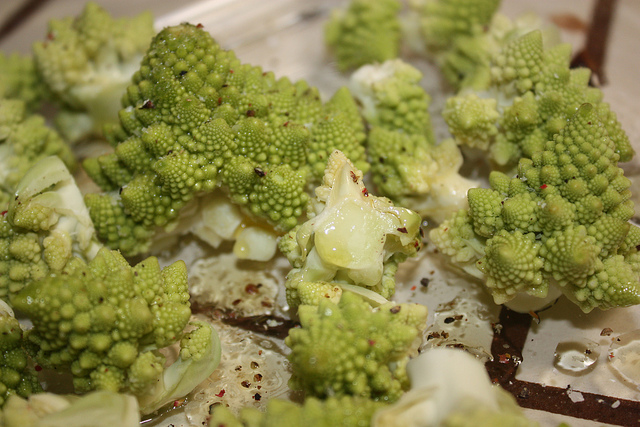 I came across this Jamie Oliver recipe for cauliflower mac and cheese a while back, and it has become a staple in our weeknight rotation, especially when we have lots of cauliflower to use. It has a great, sharp flavor and a creamy sauce, and the cauliflower actually adds a lot to it. I thought it sounded kind of weird at first, but I’m a convert. I hope your family enjoys it as much as mine does!

Remove the outer green leaves from the cauliflower and discard. Slice the end off the cauliflower stalk and cut the head into small florets. Halve the thick stalk lengthways, then slice thinly. Grate the cheddar and parmesan into a large heat-proof bowl. Finely chop the parsley stalks and leaves.

Bring a large pan of salted water to a boil. Add the macaroni and cauliflower and cook according to the macaroni package instructions. Drain, reserving the cooking water, and transfer to a large bowl.

Return the water to a boil (drain a bit if you need to for the bowl to fit) and place the bowl of cheese over the saucepan. Add the crème fraîche or sour cream and a sprinkle of garlic powder. Carefully stir every so often until the cheese is smooth and melted. If the water boils up beneath the bowl, just turn the heat down slightly. Add all the chopped parsley to the melted cheese and season with salt and pepper.

Carefully remove the bowl of cheese using an oven mitt and set aside. Drain the pan, reserving about a cup of the cooking water. Return the pasta to the pan, pour in the melted cheese, and stir.

Preheat the broiler. Add a splash of the reserved cooking water to the macaroni, stir in, then transfer to a baking dish.** Top with a generous sprinkle of cheddar cheese and place under the broiler until golden and bubbling.

* Or a small-ish head of cauliflower (romanesco in particular sometimes comes in small heads), or just make a double batch with a whole head. It freezes well, and who couldn’t use a quick homemade meal in the freezer for a rainy day?

** If you want to make this ahead, you can stop here and refrigerate the whole thing in the baking dish. Just add about 20 minutes of covered cooking time at 350° to heat the dish all the way through before you broil it.