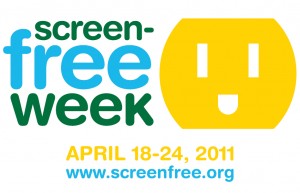 I’ll be the first to admit that I use the TV as a babysitter. My son gets to watch a show, either from the DVR or Netflix Instant, while I’m getting ready in the morning, and sometimes in the evening as I’m getting dinner ready. If, for some reason, the DVR is having issues, I am likely to agree to his using my laptop to watch videos online. On a few occasions, I’ve also let him explore the Star Wars Sounds app on my phone.

Of course, part of me wants to be that mom….the mom who never let her kids watch TV in the first place, and whose kids happily play by themselves while she whips up some healthy, but nutritious baked goods in the kitchen.

But, who am I kidding?

I will say that like me, my son is not a big TV watcher. He rarely watches an entire 30 minute show, and instead gets started on his latest Lego creation (or asks me to play or can’t find a particular piece and wants help…which I am embarrassed to admit has made me think, more than once, “Can’t you please just watch this show so I can get ___________ done?”).

I know screen time can add up quickly. The numbers are staggering:

I do want to stay mindful of my child’s consumption of media, especially as he grows older, and so I made the decision to participate in Screen-Free Week, which will take place April 18-24, 2011 (yep, that is next week).

How am I going to do it? Well, I haven’t quite gotten that far, but one thing I do know is that it will mean spending less time on my phone and my laptop when I’m with my son, and more quality time together. On the Facebook page for Screen-Free Week, folks have posted articles and ideas. Here is a great article with a list of possible activities.

I think, for the most part, it will come down to planning. How can I involve my son in dinner preparation? Can he be part of a conversation about a new morning routine that doesn’t include a remote?

I don’t honestly know how this will go. But what do I have to lose?

Have you been successful in reducing or eliminating your children’s screen time? Any words of wisdom to share?

4 Comments on Could you go Screen Free for a week?