My twelve year old son has had an extreme eczema flareup over the past year in which we’ve seen an allergist and dermatologist, in addition to his regular pediatrician. I have been trying everything that I could get my hands on to get it under control. They have all had different ideas on how to treat it with the treatment of choice being steroids. The dermatologist prescribed a couple of different lotions: one for his body, one for his face and neck. We would go in for a visit once a month, each time with hopes that the next prescription would be the magic one that would get it under control. It only seemed to get worse instead of better. Whatever lotions he prescribed were causing horrible flaking. It looked like he had a bad sunburn all over his body.

On the last visit, the dermatologist decided to change his diagnosis to seborrheic dermatitis on his face. He prescribed an anti-fungal cream, advised me to put him in light therapy three times a week (bad part: increased chance of skin cancer) or to get him started on a six month round of immune suppressing drugs (bad part: way increased chance of cancer). Opting out of these medical options that would increase my child’s risk of cancer, I set off on a quest to find something not as harmful to help him. Strange how these drugs that are supposed to help can only cause such problems.

And so I Googled. I found message boards where people left all kinds of advice for dealing with and treating eczema. Simple things that I hadn’t thought of before like sleeping with gloves on so that the “night scratching” doesn’t harm his skin. Or when it gets really itchy, get a cold washcloth and place that on the skin instead of scratching. Cool showers were recommended as well.

I also found some homemade recipes for healing eczema: turmeric, honey and olive oil, coconut oil. What’s worked and what hasn’t been a hit? A few readers and friends have asked about what we’ve been doing to clear it up, so I thought I would lay it out for anyone who struggles with these skin conditions. Here are a few of the things that have worked and one that has not.

Spectrum Organic Coconut Oil- I bought a large container at Sprouts for about $10. It’s specifically made for use on the body– you can find it in the same aisle as the lotions. It’s pure, unrefined and helped clear up a large part of the outbreak. It really helped to keep his skin moist, as he would rub it in three to four times a day. Downside: it’s oily. I have had to do lots of washing of the bed sheets and blankets over the past couple of months. It also smells like coconuts so he had a friend who told him to stop using it cause it makes him “smell funky.” Oh well, we think the benefits far outweigh the negatives!

Skin MD- Knowing that my son was suffering from eczema, Skin MD sent us a sample bottle to try out. It’s a natural shielding lotion that helps to prevent dry skin. The first two ingredients are water and aloe vera. The other things are all foreign words to me. But I imagine the aloe in it really does make his skin feel less itchy as he claims. He uses this lotion on his face after his shower. It comes in a small bottle but advises to only use a small amount. The 4 oz. bottle is $18 but will last for 1-2 months. You can order it online.  Downside: It burns his skin a minute or so when he first puts it on. 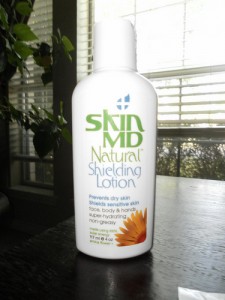 Lotions with Zinc Oxide- You know, like the stuff you use on diaper rash. Shockingly, this has worked the best! We had some left over Penaten Cream from a trip that we took in Germany when my daughter was a baby. This stuff is strong. It’s pasty and makes his skin turn really white when he uses it. But he would slather it on and smooth skin would surface on the other side! It was amazing. I’ve since stocked up on diaper rash ointments for him. I’ve even found some at the Dollar Tree for $1! Impressive since those lotions can be pricey. Are you wondering what his reaction was when he found out that he was using diaper ointment? He didn’t care. He just wants normal skin again. Poor boy. 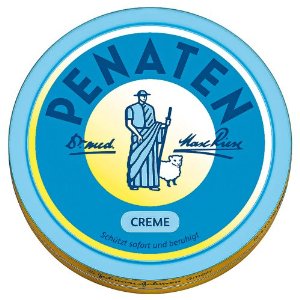 And the most shocking of all: Chlorine! A friend of mine told me that she had a flareup as a kid and was told to swim because the chlorine helps. We tried this a couple of weeks ago when he had been outside skateboarding all day. His skin was starting to get all red and irritated. He jumped in the pool for ten minutes and it was cleared up almost completely! Now we make him go to the pool at least three times a week.

One product that he claimed did not help at all is All Terrain Kids Eczema Cream. I really had high hopes for this one that I bought at Sprouts. It’s specifically made for kids with eczema. Totally thought it would help but all I heard were complaints when he used it.

Have you found any natural remedies to help skin problems? Please share!