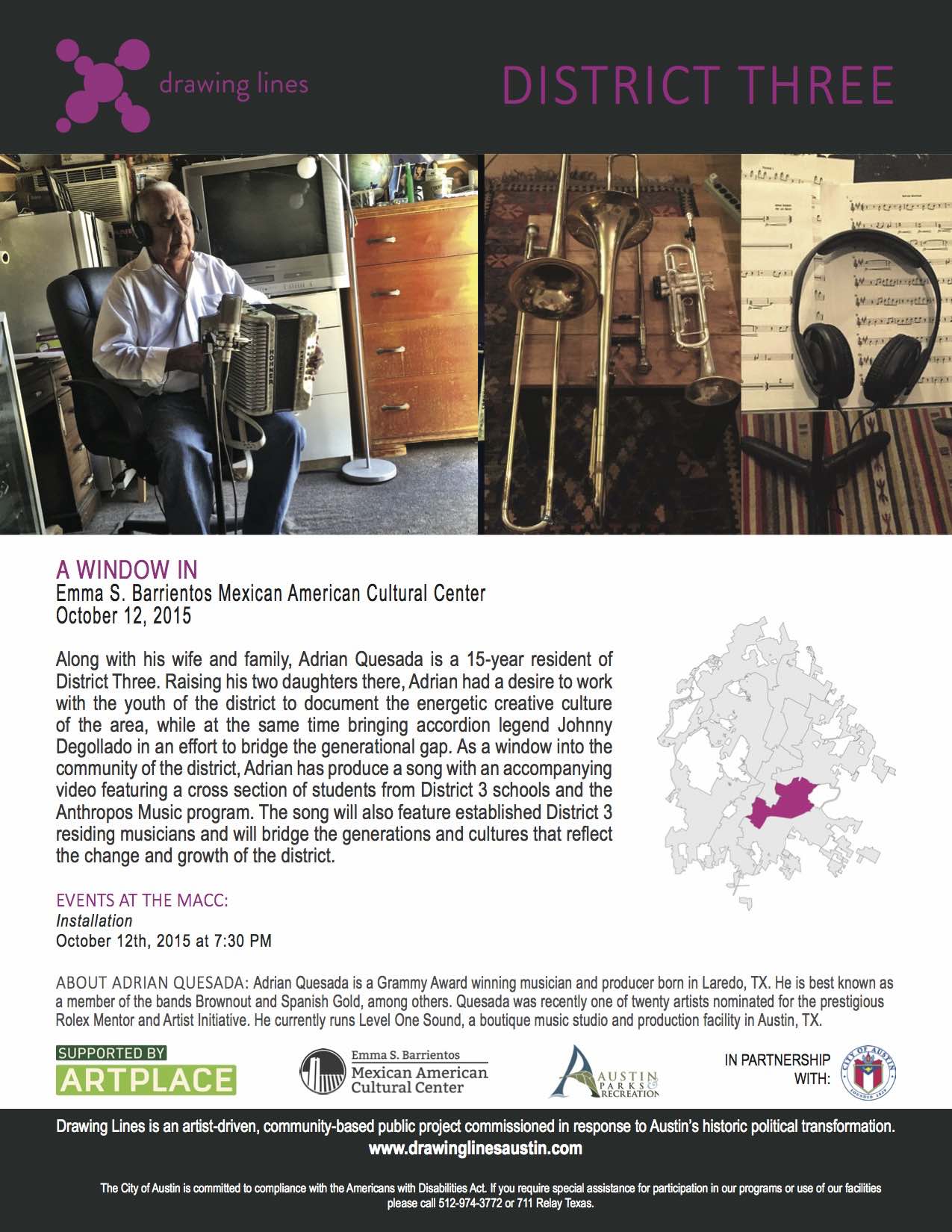 Drawing Lines, a highly anticipated public art project focusing on Austin’s citizen-driven transition to a new political system of geographic representation, will be unveiling all ten artists’ projects in the coming months. All of the Drawing Lines events are free and open to the public, with the Windows project performance and screening at the Emma S. Barrientos Mexican American Cultural Center in District 3 at 7:30pm on Monday, October 12th with artist Adrian Quesada.

As a window into the community of the district, Quesada will produce a song with an accompanying video featuring a cross section of students from District 3 schools and the Anthropos Music program. The song will also feature established District 3 residing musicians and will bridge the generations and cultures that reflect the change and growth of the district.

“I love the idea of working with different generations because I think as adults we see a lot of the changes in the neighborhood, and the district, but I think for kids, they’re at an age where some issues may be a bit over their heads. I’d like to get them engaged in this idea that they’re part of this community, at large in the City and in the district, and that the city is changing, and that there are concerns. There are great things about the district, and there are bad things about it too. I hope that by talking to them a little bit about it, I might be able to make them aware of some of the things that are happening.”

Quesada and Council Member Renteria have had the opportunity to discuss different challenges facing the community that Quesada hopes to showcase in his work.

Adrian Quesada is a Grammy Award winning musician and producer born in Laredo, TX. He is best known as a member of the bands Brownout and Spanish Gold, among others. As a musician he has performed with artists as diverse as Prince and GZA (Wu-Tang Clan). He has also produced albums by David Garza, Daniel Johnston, Natalia Clavier and The Sword. Quesada was recently one of twenty artists nominated for the prestigious Rolex Mentor and Artist Initiative where he would have been protege to the legendary Brian Eno. He currently runs Level One Sound, a boutique music studio and production facility in Austin, TX.