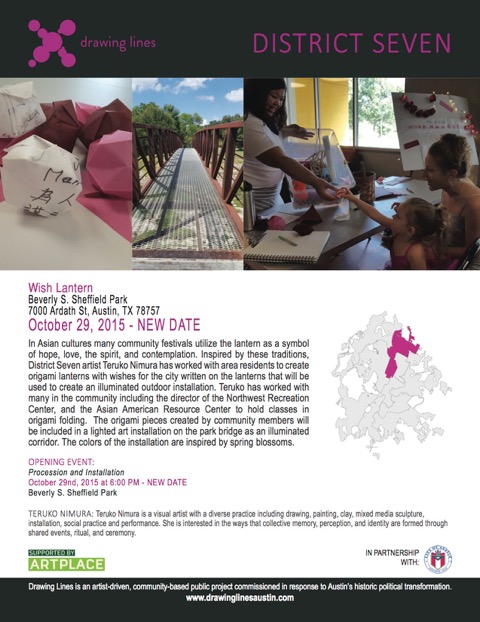 Drawing Lines, a highly anticipated public art project focusing on Austin’s citizen-driven transition to a new political system of geographic representation, will be unveiling all ten artists’ projects in the coming months. All of the Drawing Lines events are free and open to the public, with the Wish Lantern Opening Ceremony at Beverly S. Sheffield Northwest District Park in District 7 at 6pm on Thursday, October 29th with artist Teruko Nimura.

In Asian cultures, many community festivals utilize the lantern as a symbol of hope, love, the spirit, and contemplation. Inspired by these traditions, artist Teruko Nimura worked with area residents to create origami wish lanterns that will be used to create an illuminated corridor along the bridge at Beverly Scheffield Park. Working primarily through the Northwest Recreation Center and the Asian American Resource Center to hold workshops in origami folding, the origami pieces created by community members include their written wishes and will be threaded onto solar string lights. The project reflects the artist’s understanding of the residents’ desire and appreciation of community gathering spaces like recreation centers, libraries and parks alongside their concern that the rapid growth and increased density could put the existing communal environment at risk.

“Because this is a public project with an emphasis on community engagement, I was trying to think about different ways that people come together. Traditional festivals, ceremonies and rituals are ways that people connect with each other from year to year, and generation to generation, that are common throughout the world. An example that I really love are the lantern festivals of Asia where cities display hundreds of lanterns in a public space. Light has all of these associations that are very hopeful – spiritually, historically.”

“I am intrigued by that feeling of warmth and protection that you can get from a beacon of light surrounded by darkness. I wanted to re-create that for the community of District 7 and Austin. I wanted them to experience that kind of communal, hopeful feeling, that I feel lantern festivals represent. I utilized origami because it is a way of doing an activity together that connects generations. It can connect people too if you are teaching somebody. I wanted to use origami as a way to interact with the people of the district. By asking them to write their wishes on the actual paper that we’ll then fold the lanterns out of, it is like a ritual that gives their wishes tangible and dimensional form.”

“When they come together in the final piece the whole piece will be one giant energetic wish – lit up, and alive with the light.”