Drawing Lines, a highly anticipated public art project focusing on Austin’s citizen-driven transition to a new political system of geographic representation, will be unveiling all ten artists’ projects in the coming months. All of the Drawing Lines events are free and open to the public. Two events will be taking place during the weekend of November 7 and 8, 2015: Grant to Plant in District Eight and a Wild Plant Walk in District Five. 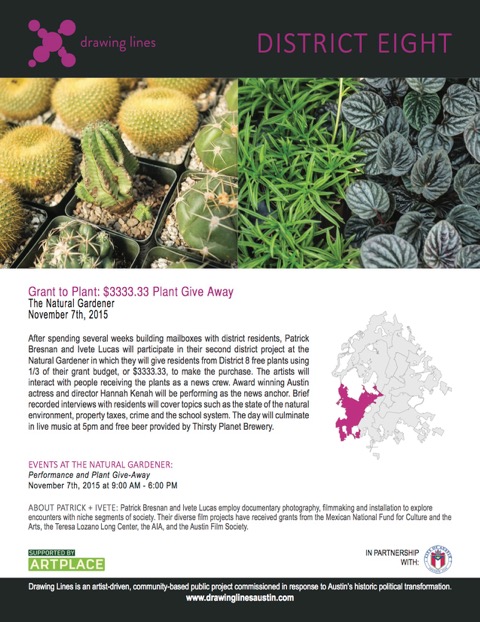 GRANT TO PLANT : $3333.33 PLANT GIVE AWAY
Natural Gardener
Performance, November 7th from 9a-6p
After spending several weeks building mailboxes with district residents, Patrick Bresnan and Ivete Lucas will participate in their second district project at the Natural Gardener in which they will give residents from District 8 free plants using 1/3 of their grant budget, or $3333.33, to make the purchase.

The artists will interact with people receiving the plants as a news crew. Award winning Austin actress and director Hannah Kenah will be performing as the news anchor. Brief recorded interviews with residents will cover topics such as the state of the natural environment, property taxes, crime and the school system.

Patrick Bresnan and Ivete Lucas employ documentary photography, filmmaking and installation to explore encounters with niche segments of society. Their diverse film projects have received grants from the Mexican National Fund for Culture and the Arts, the Teresa Lozano Long Center, the AIA, and the Austin Film Society. Their photography and installation work have been displayed nationally in galleries and museums, including the UT Visual Art Center and Fotofest’s Talent in Texas curated by Toby Kamps and Michelle White of the Menil Collection. 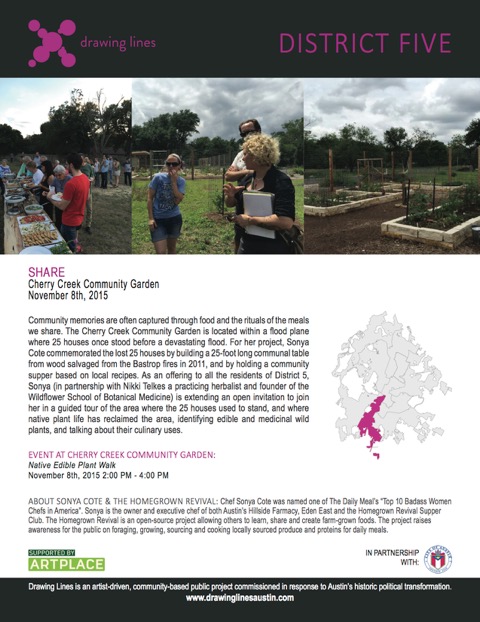 Cherry Creek Community Garden
September 29-ongoing
Wild Plant Walk Sunday, November 8 at 2p
Community memories are often captured through food and the rituals of the meals we share. The Cherry Creek Community Garden is located within a flood plane where 25 houses once stood before a devastating flood. In 2010, FEMA gave a grant to the City of Austin to buy out a portion of a South Austin neighborhood because of its extensive history of flooding. The abandoned or damaged houses were all razed. Through the years, crime and homelessness have made waves into the abandoned streets. The diverse community banded together to start a community garden plan in hopes to preserve this area as a park to discourage crime.

For this project Sonya Cote will commemorate the lost 25 houses by building a 25-foot long communal table from wood salvaged from the Bastrop fires in 2011, the most destructive wildfire in Texas history. This table will be located in the center of the park as a new community gathering space and built in the spirit of togetherness that is necessary for a healing neighborhood, a growing area, and a booming city. It will be a place that people can pull up a chair and commune with their fellow neighbors over a meal made of ingredients from the garden. To christen the table, she will prepare a Super Blood Harvest Moon and Total Lunar Eclipse dinner for the community using recipes and ingredients collected from the neighborhood.

Sonya, in partnership with Nikki Telkes, a practicing herbalist and founder of the Wildflower School of Botanical Medicine, will extend an open invitation to whomever wants to show up in District 5 and will guide community members through the area where the 25 houses used to stand, and where the wild life have reclaimed, identifying edible and medicinal wild plants.

ARTIST: SONYA COTE & THE HOMEGROWN REVIVAL
Chef Sonya Cote was named one of The Daily Meal’s “Top 10 Badass Women Chefs in America”. Sonya is the owner and executive chef of both Austin’s Hillside Farmacy, Eden East and the Homegrown Revival Supper Club.

The Homegrown Revival is an open-source project allowing others to learn, share and create farm-grown foods. The project raises awareness for the public on foraging, growing, sourcing and cooking locally sourced produce and proteins for daily meals.