I ran across an article by Pam LeBlanc at the Statesman about an upcoming event celebrating the release of Tales from Another Mother Runner, an anthology of essays written about, you guessed it, running. I shared the link with my runner mama friends Catherine and Leigh Ann and asked them if they knew of any Austin connections to the book, since it sounded like something we’d want to share with the LiveMom readers. Both of them suggested I connect with Susan Schorn.

It didn’t take long for me to remember that I had seen Susan before. She was in the 2012 Listen to Your Mother cast, where she read her essay, “Splitting the Difference”. I decided I wanted to know more about Susan, and that you might too.

Susan is a martial artist, self-defense advocate and writer. When I asked her about her connection to the running event, she told me that she was a guest for an Another Mother Runner podcast on safety while running. Susan runs regularly to keep up her aerobic fitness and thinks running is important for women, who tend to be discouraged from running alone or venturing outside of the neighborhood.

Thank you to Susan for taking the time to answer our questions below!

LiveMom: How many children do you have, and what are their ages?

Susan: My son is 18, and my daughter is 11. Dave leaves for college in the fall and Lilly will be starting middle school. It’s going to be very strange having only one child in the house again.

LiveMom: How long have you lived in Austin? What brought you here?

Susan: I moved to Austin in 1985 to attend UT, where I still work today, after having collected four degrees there. I am the quintessential student who would not leave school.

LiveMom: How and when did you enter the field of martial arts? What do you do as a self-defense advocate?

Susan: I started my martial arts training in my 20s, but only stayed with it for a year or two. After a ten-year break, I discovered Sun Dragon and have been training there ever since. Self defense is a major component of Sun Dragon’s mission (the school is a 501(c)3 non-profit organization), so all students take some practical self defense, and many of us go on to teach it. I’ve been teaching self defense for about 15 years now, working with lots of different populations, but focused primarily on women.

LiveMom: What has been your experience practicing martial arts as a woman? Have attitudes in the field changed in regards to gender since you started practicing?

Susan: I started my training in a school with more male than female students. Coming at Sun Dragon, which at the time was for women only, was a huge change. It was less competitive. Our founder and lead instructor, Sensei Suzanne Pinette, pushed us incredibly hard, but she was also unbelievably supportive emotionally. I think women who train in martial arts always have a shared sense that they’re doing something special, that the experience is different for them than it is for men. At Sun Dragon, we were privileged to have a space where that was the central experience; not some peripheral gloss on the main, male training experience.

Attitudes towards women in the martial arts haven’t changed too much since I started training. They changed a LOT when my teachers started training. When Bobbi Snyder, a founding member of the National Women’s Martial Arts Federation, sought out her first karate school in 1960s Philadelphia, the sign on the door read

NO DRINKING
NO WOMEN.

You can see why Sensei Suzanne opted to start an all-women’s martial arts school here in Austin! But one change that I have witnessed, and helped bring about, is the inclusion of men in training spaces that were formerly for women only. That’s been a rewarding shift, though challenging–we don’t want to lose what we gain by centering women’s experience of the art. Yet there are lots of amazing men who really want to benefit from that energy and expertise, and we think sharing it is a good way to strengthen our community.

LiveMom: Part of the title of your book, Smile at Strangers, refers to living life fearlessly. What does that mean to you, and why do you think it’s an important thing for us to do?

Susan: “Fearless living” isn’t about living life totally free of fear, because fear is a good survival tool! It’s about living with less fear. I’ve used my martial arts and self defense training to take stock of all the fears I have, and realized that many of them didn’t even make sense. We need to give ourselves permission to let go of fears that aren’t realistic or that we can’t control, and find constructive ways to respond to the fears that remain. I think that’s an important process because, while fear is a good survival tool, there are also many situations in which it doesn’t help us and makes us less secure. Women in particular often find their lives significantly constrained–where they go, what they wear, who they talk to–by fears. We actually have a lot of power to make good choices and protect ourselves, but when we focus on danger and fear, we forget our power.

LiveMom: Why do you think more and more stories of violence are entering our consciousness, whether it’s Ferguson, violence against young women on college campuses or domestic abuse involving members of the NFL? What can we do as parents to raise children who are capable of protecting themselves if in a dangerous situation?

Susan: Violence has always been a popular topic in the media; it attracts a lot of attention. What seems to be different now is that we’re finally hearing more about certain types of violence that have flown under the radar for a long time, and were tacitly considered “acceptable” or, at least, things we “couldn’t change”: violence against women, children, and minorities. I see a new determination in these discussions to end the silence, and commit to finding solutions.

As parents, it’s important that we teach our children to set and enforce their own boundaries, and to respect the boundaries of others. That means we have to model the same behavior: If my child doesn’t want a hug from Grandma today, Grandma should respect that decision. If the cat doesn’t want to be dressed up in doll clothes, my child needs to respect that decision. Actually, cats are really good at modeling boundary-setting.

LiveMom: What piece of unsolicited advice would you give to a new mother (or father)?

Susan: I think the most helpful advice you can give any new parent is, “Relax, you’re doing great.”

LiveMom: What do you like most about Austin? What would you change if you could?

Susan: I love pretty much everything about Austin except the traffic. I can’t imagine any city but Austin giving birth to a school like Sun Dragon.

LiveMom: What is your idea of a perfect day to spend in Austin with your family?

Susan: A perfect Austin day for our family would include a trip to Barton Creek Greenbelt with our dogs, lunch at Phil’s Icehouse or the Green Mesquite, and then an evening at Barton Springs–either swimming or drumming. I’d probably throw a sparring class into the mix somewhere, too!

LiveMom: What new projects are you working on that you are excited about?

Susan: I have three projects I’m currently juggling, in addition to columns and articles: a non-fiction book on industries like home security systems, which rely on fear to earn a profit; a novel about sparrows (sort of cross between Jonathan Livingston Seagull and Goodfellas); and a thriller that pairs an elderly female martial artist with a disgraced New York City firefighter as they try to take down a human trafficking ring. As you can imagine, my office is an ungodly mess. 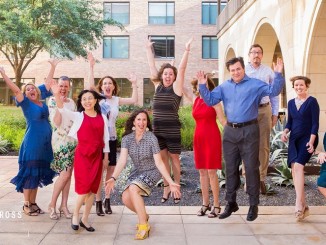