I can’t say it enough- there are some really talented and incredible women living in Austin and I’ve been lucky enough to cross paths with some of them. These women have offered much needed advice, encouragement and a general feeling that they are in it for the long haul with me. Deanna Roy has been one of these supportive women. She’s taken the time to help out LiveMom with some much needed advice and encouragement. I’m very grateful to her. She’s a remarkable Austin mom- a photographer, writer and an a true internet pioneer woman! 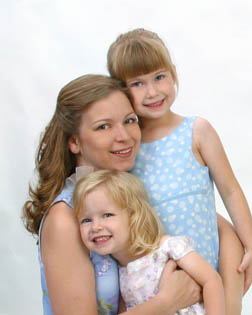 Tell us about yourself:
I am a work-from-home mom who runs a portrait studio out of her house. I
also write, both freelance articles for publications like Austin Family
Magazine, as well as continue to work on novels. In addition, I run a
very large web site for grieving mothers who have lost babies to
miscarriage.

How and when did you learn the art of photography?
I first took pictures for publication in high school on the yearbook
staff. This experience came in very handy when I ended up teaching high
school journalism later, including photography classes when my degree
was in writing. For the first few days of school, I just stood back and
told the seniors on my staff to "Start developing the pictures in the
darkroom and I'll keep watch." This is how I learned to develop black
and white prints--from my students. They had no idea. I used to sit in
my bathroom with the lights out, practicing over and over again how to
load film on a reel in case they got stuck or tore the strip. I spent a
lot of time in bathrooms.

After I had my first daughter, I lasted about six weeks before I needed
something to do! I felt opening a home photography studio would be an
easy way to control my hours and still work some. She just turned nine,
and I have photographed over 500 families in that time. Emily was
probably four before she realized all those children weren't just coming
over to play with her! But she often became the "reward" they got for
taking good pictures.

You are also a writer. Tell us about that aspect of your life and what
you have written.
I have wanted to write since I was five. I wrote little picture books as
a child about brave kitties who courageously snuck through dog-infested
garbage dumps to save kittens. I finished my first novel-length
manuscript when I was 16, called "Only Time Will Tell." Thankfully, I've

learned about clichés since then.

Going into college I was torn between journalism and acting. Ultimately
a traumatic event my senior year, when our amazing one-act was
disqualified over an antiquated Texas law about prayer, pushed me into
journalism, mainly because due to the disqualification and stripping of
our awards, my scholarships ended up being at the J-school, not in
drama. One of my friends from that ill-fated one-act, however, Angela
Kinsey, ended up sticking with acting and is on the cast of "The
Office."

Last fall, I was watching "Meet the Robinsons" with my girls and cried
my fool head off over the ending. As I put them to bed, I
realized--that's exactly what I want to write. Something wonderful and
magical, with the most hopelessly happy ending ever written. I started
immediately on Jinnie Wishmaker, a novel about a girl who can grant any
living thing its one true wish. I've been sending the completed
manuscripts to agents for about two months now. It's a long process.

What is your favorite book? Favorite genre?
My favorite book of all time is "Summer of the Swans," a Newbery
Award-winning book by Betsy Byars. When I started working on Jinnie, I
stayed up all night reading it and once again just started weeping over
how powerful such a simple story could be. I read almost exclusively
literary books.

What do you like to do to unwind at the end of the day?
Unwind? Unwinding is precisely what would prevent me from writing! Stay
up late! Work faster! Melt down! Put it on paper! Really, I don't sleep
much. I can't stand the wasted time.

Where are you from?
I am from a small town called Archer City. I would love to become its
one great writer, but unfortunately Pulitzer-prize winning author Larry
McMurtry also grew up there. Figures. Population 1836 and one of them is
Larry McMurtry.

What are some challenges that you face when trying to juggle a business
and family?
Sometimes as a work-from-home-mom, you feel guilty about having to
finish up a project even though the kids have come home from school. So
even as I dash downstairs, shove some snack at them, and race back up to
get "one more thing" done, I have to remind myself that I am working,
and it's okay if I am just "available" and not hovering.

What serves as your inspiration in life?
All the writers who stuck it out in the face of rejection. I don't know
how they do it.