Since way back in 2007, we here at LiveMom have been introducing you to local mamas (and papas) who are up to all kinds of interesting things. From teachers to local business owners to creatives to nearly anything in between, these peeps are part of our village. They also are part of the reason living in Austin and raising kids here is so darn cool.

Today, we introduce you to Kristin Henn, the founder of Move Your Tale, a resource for families and youth with an interest in storytelling, improvisation and performance. I first saw Kristin in action at the now-defunct Family Connections storytime (insert sad face here — not about Kristin, but in memory of FC) and she came into my son’s preschool classroom at the All Austin Coop as a special guest. After taking part in one of the What’s the Story Steve? Saturday improv shows for kids, I signed my son up for a Move Your Tale camp last summer. I was curious to get to know more about her, so thanks to Kristin for your willingness to answer our questions!

LiveMom: If you feel comfortable sharing, how many kids do you have? How old are they?

Kristin: Sure! I have two daughters – Margot is 8 and Charlotte is 11.

LiveMom: How did your career lead you to Move Your Tale?

Kristin: I’ve been involved in the performing arts since I was a little kid, and I decided to major in Theatre as an undergraduate. I continued through graduate school and focused on Creative Drama. My first professional job was actually as an academic advisor in The Department of Theater and Dance at UT, which gave me the chance to spend my time helping other creative folks determine how to navigate the arts world. That job was also where I first learned about improv. A number of the students who were undergrads in my department were very much into the local scene, and gave me a glimpse into the possibilities.

After my second daughter was born, I didn’t feel like I was giving my job at UT what it deserved, and decided I would take a year or two off to stay home. At some point, I started looking around for performing arts classes that they would enjoy. Most of what I found was either steeped in off-putting pop culture or meant paying a ton of money so your kid can be a nameless orphan in Annie. I just wanted my children to have the chance to feel confident about sharing their ideas and telling stories. Since then, I think things have changed for the better in Austin, but at that time I thought the best thing to do would be to organize my own classes that were child-centered, process-focused, early performing arts experiences. So I did. I started performing as a storyteller for kids at the same time. In 2009, I started to really long to get back onto the stage with other adult performers, and began taking improv classes at ColdTowne Theater. Almost immediately, the storytelling and creative movement work I was doing with MYT was influenced by the “just say yes” philosophy of improv. ColdTowne approached us in 2011 about merging our programs to create opportunities for youth at their theater. Thus, the beautiful Move Your Tale at ColdTowne Theater collaboration was born.

LiveMom: What benefits do you see in kids who participate in the performing arts?

Kristin: There is a huge range of benefits. Often, folks who have trouble with one-on-one interaction find that being on stage is liberating. This might be the result of performing as part of a supportive group, following an established format or having permission to be the center of attention.

For kids who are drawn to being the center of attention, the performing arts help one understand the importance of sharing the spotlight and choosing the right details to communicate. Self-confidence, timing, collaboration and risk-taking are other benefits that spring to mind.

Beyond the satisfactions of sharing your ideas and connecting with people, I think the biggest overall benefit is the sense of contributing to a thing that is larger than oneself.

LiveMom: How is working with kids in the performing arts different than adults?

Kristin: I don’t teach adults often, though I work with them constantly as a performer. The only consistent difference is that adults have more information about the world. Beyond that, there is an incredible range of ability at every age.

LiveMom: Is there something special or different about kids and improv versus a more “traditional”  theatrical production?

Kristin: The big difference between the work we do and traditional children’s theater is that the stories we tell are created in partnership with the kids on the stage and in the audience. They are empowered to create and share on the spot.

Maybe even more importantly, Improv is about the experience of the moment. In children’s theater, we cast a kid in a part and leave her there. In Improv, we cast ourselves, and recast again every time we get on stage. We allow folks to tell their own stories, and ask them to find a way to share the telling with other performers.

LiveMom: What’s up next for Move Your Tale?

Kristin: This is a super exciting time for us. In the last year and a half, our partnership with ColdTowne Theater has allowed us to offer classes and camps to older kids and teens, in addition to young children. ColdTowne is an incredible comedy training center, and the teachers, performers and facilities this gives us access to are great. Beyond the training though, is the fact that we can produce actual shows for and featuring kids and teens. Our current production schedule includes the weekly What’s the Story Steve? and our monthly Teen Improv Night. Beginning this summer, we will add a weekly early evening show. Our plan is to produce a full season of shows that complement the ideas and techniques we teach in class and camp.

LiveMom: What are your favorite family-friendly things to do around town?

Kristin: Seeing bands and hanging out at Central Market, any kind of outdoor activity that we can bring the dogs along for, frequenting the Farmers Market at Mueller, festivals, etc. Austin is an amazing place to have children.

LiveMom: When you were a kid, what did you think you’d be when you grew up?

Kristin: A writer, an actor and a veterinarian. I also always thought that if there were some kind of Science Fiction end of the world scenario that I would be the person giving a rousing speech about pressing on.

Kristin: Staying up late watching improv, then talking to my friends for hours afterward. Oh, and naps.

LiveMom: What would we be surprised to learn about you? 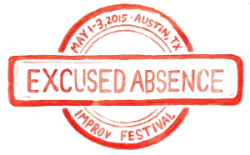