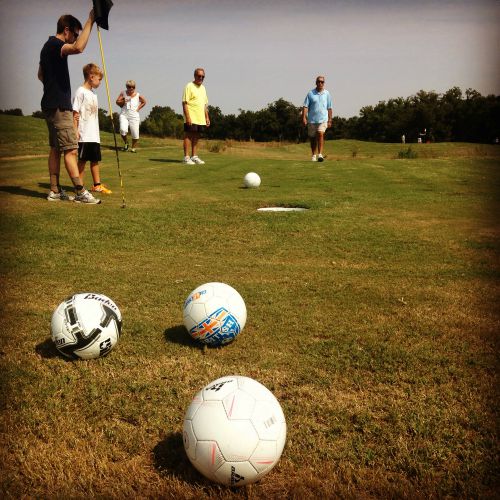 I think I first learned about footgolf through an email from a deal site. A sport that combines soccer with golf? I was intrigued, so I bought a voucher. I mentioned footgolf to my uncle, who lives out of town but comes to visit every few months. He was curious about it, as I was, and suggested we try it the next time he came into town. We decided to book a tee time on a Saturday morning in late August. It ended up being 5 of us: my dad, his brother (my uncle), my husband, my 9-year-old and I. My mom came along for the ride to keep score.

Harvey Penick Golf Campus is the only place in Austin to offer footgolf. If you are interested in trying out this new sport, here’s what you need to know about playing footgolf in Austin:

How to schedule a tee time. You can book a tee time online or by calling (512) 926-1100. Tee times start at 9am, and like most things in Texas, during certain times of year, the earlier you start, the cooler it is. Next time, I’d go in the cooler months, since we were all hot and sweaty when we finished. You can play with up to four people, and you can expect to spend about two hours at the course. Although we had 5 people, the attendant allowed us to all play together as long as we kept a steady pace of play. 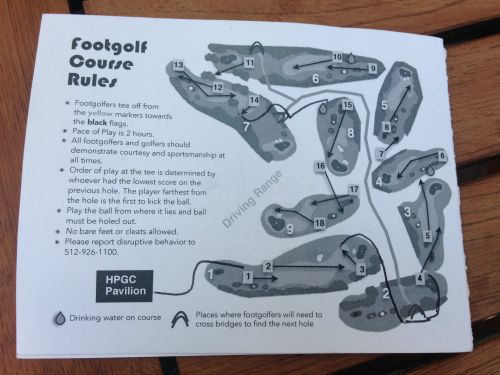 The rules of the game. I don’t know much about golf, but most people who have played mini golf will recognize many of the rules. There are 18 holes and there is a par for each hole, which means the expected number of “strokes” it will take to get the ball into the hole. Just like for mini golf, you pick up a card at the start to keep track of your score. There is a “tee box”, which is an area to start each hole. The footgolf tees were yellow at Harvey Penick, so it was easy to tell them apart from where you tee off for golf.

After each person takes their first turn, the person furthest away from the hole starts the second round of strokes. You can choose to remove the flag from the hole once you get close if you’d like. There were several holes where we realized partway in that we were going towards the flag for the incorrect hole, but I think if we were to go back, we would have it all figured out. The holes were either par 3, 4 or 5.

When I called to book our tee time, I asked if we should rent a golf cart – I’m sure that would add to the fun for my kid – but the person I spoke to recommended against it, since there is so much going back and forth. It was not a huge distance to walk, even for the 9-year-old (my husband pointed out that it’s relatively small for a golf course).

According to the rules, at subsequent holes, the person who goes first is the person who has the fewest number of strokes on the preceding hole. The rules for what to do if your ball leaves the field of play into the water or a hazard are similar to golf. If you can, play the ball back onto the course. If you can’t, you can bring the ball back onto the course and take a 2-stroke penalty. We found it was pretty easy to stay on the course, although we did have to play the ball out of the roughs a few times. There was a little bit of waiting while we were playing. Once, we let a group of footgolfers go in front of us when it was clear they would be faster than us and we would be holding us up. At another point, the footgolf and golf courses overlapped, so we waited while golfers played through a hole. Since golfers can hit the ball further than we can kick it, the golfers can usually pass by quickly. 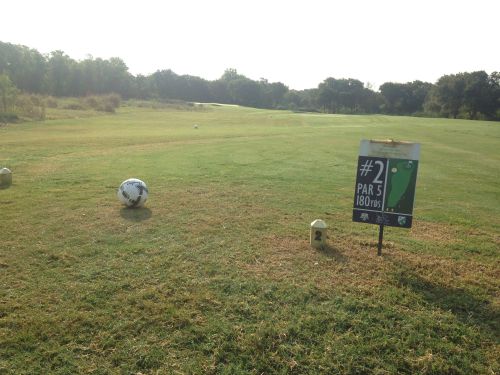 What to wear. You need to abide by the dress code of the course. I couldn’t find anything online about a dress code at Harvey Penick, so I called to make sure, and they don’t have one, so no need to worry about a collared shirt, like you might need at a private golf course. The hilarious video posted on the course site about footgolf suggests that you wear argyle socks, a collared shirt and a flat cap to play footgolf, but the one rule is no cleats. I had flat indoor shoes, so I wore those, but everyone else just wore regular tennis shoes, and they were fine. I’m guessing Crocs would not work very well and I don’t think you could kick the ball very far with flip flops on. The other footgolfers we saw were wearing shorts and t-shirts, so that would be fine. Since it was warm when we went, I was glad I brought a dry shirt to change into afterwards, since I did get pretty sweaty.

What to bring. One of the benefits of footgolf is that all you really need to bring is yourself. You play with a regular adult-sized soccer ball (size 5), but you can rent them at Harvey Penick for $5 each. It’s best to choose balls which look different enough from each other so you can tell them apart on the course. I brought water in a water bottle, which was wise, although it was a little annoying to keep putting the bag down and picking it up as we traveled along the course. There are places to refill your water bottles if needed (it’s just a water cooler, so not a water fountain, so you would need to bring a bottle or a cup to use them). 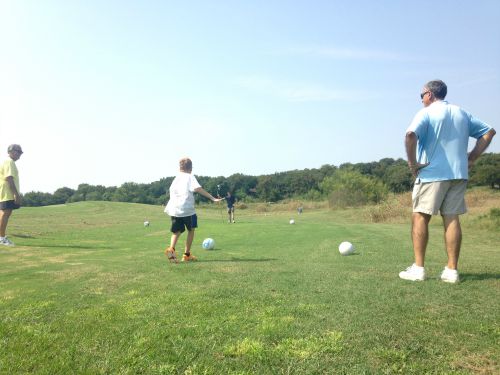 The verdict. We all agreed it was a fun outing. My child sustained a minor injury on the 5th hole, so he was hobbling for a few holes, but joined back in to putt for my husband during the last half of the course. If it had just been the three of us, we might not have finished the whole course, but since we were all together he toughed it out. It was relatively quick for 18 holes, we were all pretty even skill-wise and we discussed doing it annually, although when it gets cooler. Another check off the bucket list! 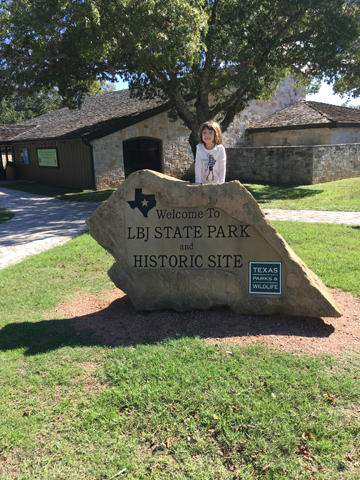 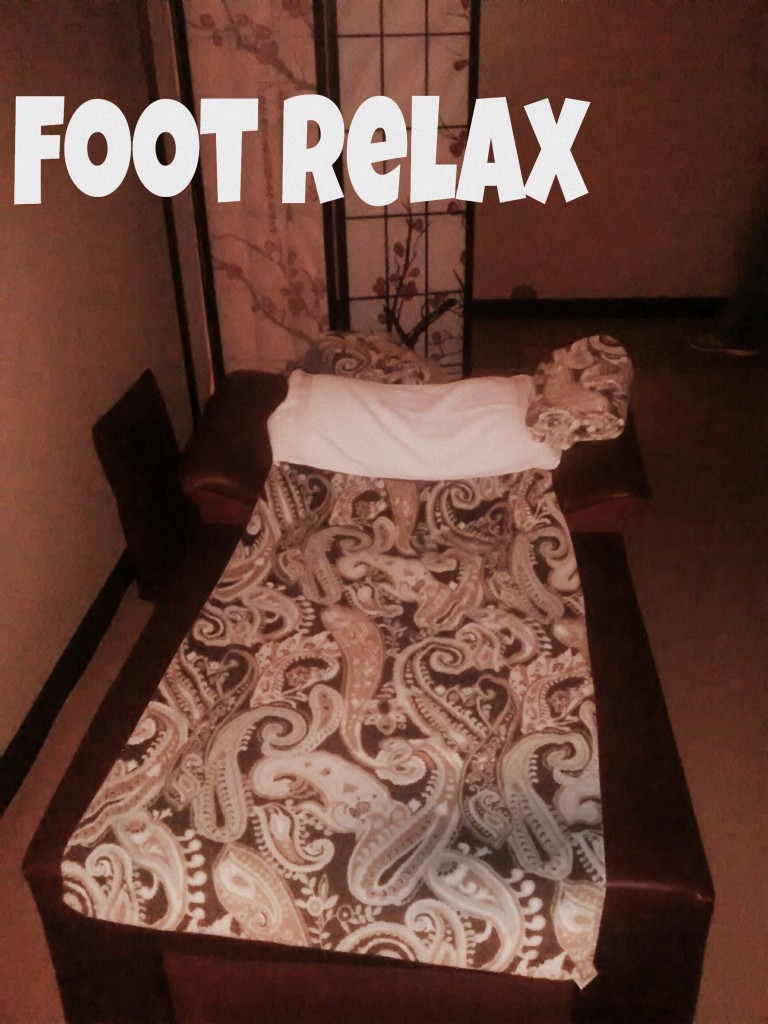 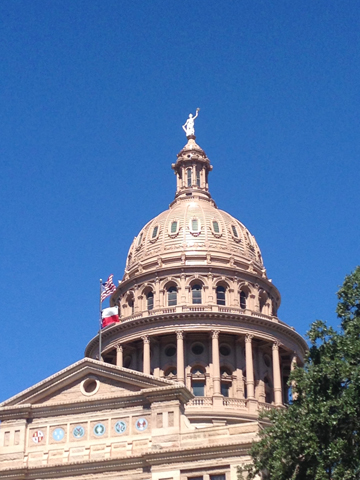