I know that he’s in love for real this time. It’s written all over him- from his face to his feet. He just has that aura of being in love. I really do think it’s real this time. Not like one of those silly kindergarten crushes of the past. Yes, my son has a girlfriend.

Let me take you back in hopes of giving you a better picture of why I feel the need to write about this particular girl. My son is nine and has had many crushes, starting when he was a wee little one in daycare. I used to joke with my friends about how I was looking forward to the days when I would get to meet his future girlfriends. I had it all planned out from his infancy. Night time would arrive and the girl would show up at my door. I would lead her to the kitchen table, sit across from her and light up a cigarette (just to create the proper interrogation feel). I’d throw questions at her, some trick ones, some real , in hopes of finding out the truth of her character. All this going on while a very bright spotlight is shining on her, making the sweat bead on her forehead and drip like Texas raindrops in spring. Now, don’t get me wrong, I know that we are supposed to raise our children to be strong, independent adults and that they shouldn’t have to get approval from their mothers for whom they would like to date. But, this is a right of mine as a mother to a son. Dads get to stand in front of the door with a shotgun in hand when their daughter’s date arrives. So why can’t I have my fun too? What’s so wrong with that? See, I knew you’d agree once you thought about it.

My boy walks home from school and one day, while I was waiting for him outside, I noticed that he was walking slowly and a bit slumped over. Something was wrong. Horribly wrong. He made it to our yard and dropped his backpack (very dramatically) and proceeded to roll around on the ground saying that he was stupid, over and over again. I thought he must have gotten a bad grade or maybe he got into some trouble, but no….. he couldn’t gather enough courage to have a long conversation with his “girlfriend” and the day was wasted. Completely wasted. He would now have to wait until tomorrow’s recess and it was KILLING him! It was misery… is misery. Every day, he pines for the one he loves and only wishes that they both weren’t so shy. He wants her phone number, wants to invite her to the school dance this weekend. Oh, there’s just so much that he wants to say to her, but it’s never the right moment. Can’t we all relate?

Every Wednesday, I go to his school to help out and I have lunch with him while I’m there. He pointed her out to me a couple of months ago, prior to them becoming an official “couple”, but all I could see was her back. I went last week again and as I was sitting in the hall, waiting for his class to come down, I hear, in a whisper, “There’s Riley’s mom.” And a giggle. What? My ears perked up… I heard my name. Riley’s mom, in case you didn’t know became my new name when I gave birth to him. I heard it again. And again. I peered around the corner and saw these two girls coming towards me, huddled together and trying to point at me nonchalantly. I stared them down. Not to be mean, but to figure out why it was so important that I was Riley’s mom. And then it dawned on me. It had to be his girlfriend and one if her friends. They proceeded to pass me and were at this point acting cool, as if I wasn’t there. Never a good idea to make eye contact with the boyfriend’s mama. I continued my stare… just to make sure she knew that I knew who she was. I think she got it.

I have to tell you that it felt good- that stare down. It’s really only the beginning, but somehow I felt more prepared in that moment to handle the coming pre-teen and teen years. He’s a good looking boy, just look at his picture and you’ll see why he will have many girlfriends for me to meet. It’s important that I perfect my act now. Get the stare just squinty enough, make sure that the spotlight is in proper working order, have a pack of cigarettes on hand at all times. You know, the small details. I should start to compile my list of interrogation questions now. Really though, it warms my heart to see my little boy growing and I realize that time goes by so fast. We are now embarking on a new phase in our relationship. He comes to me for advice and support in these critical times of his life. I just hope that the advice I give him doesn’t do him more harm than good, at least nothing that good therapy can’t fix! 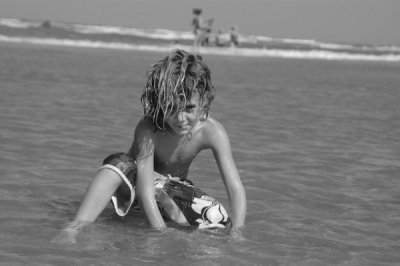 I would love to hear some of your kids’ coming of age stories. How did you manage to remain close to your kids throughout their pre-teen and teenage years? What were some of the things that you looked or are looking forward to with your kids as they get older?

3 Comments on It’s A Girl…. Friend