There’s no doubt that Austin is flush with creative, artistic individuals. Beyond the live music shows that we’re so well-known for, Austin is also home to a thriving performing arts scene. While it make take extra planning and prepping for us busy moms to get a night out at the theater, it’s such a worthwhile and emotionally satisfying activity. So get out there in 2015! Take advantage of our city’s “culture of creativity”. Enjoy some singing, dancing, and storytelling that will move you, entertain you, and inspire you.

Coldtowne Theater
Help Steve and his cast of improvisers bring original stories to the stage! These 50 minute live performances feature Steve the improvising poodle. Each show is a unique story inspired by audience suggestion. All ages welcome. Tickets at the door. Volunteer to be a part of the show or enjoy from your seat.
Every Saturday
Shows at 10am, pay as you wish

The Flying Theater Machine has finished their homework, played around at recess, and made it to school on time. Now they’re ready for a field trip! And you’re invited to go on this magically scientific journey to explore all sorts of things–from the ocean to outer space to prehistoric times to your own human body. You’ll be lead by a fun-loving teacher into a new scientific subject each week along with the intellectual student, the nervous student, the class clown, the athlete, the misfit, and anyone else you might meet at school. Come learn with us on our weekly journeys, which we bring to life with suggestions and help from the kids (and their parents). The more explorers, the more to discover together!
Every Sunday
Shows at 2pm, $5

Disney in Concert: Magical Music from the Movies
The Long Center

Derived from some of the most famous movie scores ever – Beauty and the Beast, The Little Mermaid, Mary Poppins, Aladdin, The Lion King, Pixar, and more – this spectacular musical program explores many of Walt Disney’s stories and characters through some of the best loved songs in movie history. DISNEY IN CONCERT: Magical Music from the Movies features a 38-piece orchestra, four Broadway vocalists, and Disney-produced visuals, including rare original storyboard artwork and video from the films. A treat for the entire family. Get your tickets to the best Disney performing arts event of the season. From movies, to Radio Disney, to Dell Hall…experience the musical magic all over again.
January 11
Show is at 3pm, $29 and up ($5 eyeGO tickets available for high school students, discounts for groups of 10 or more)

The Amazing Acro-cats
Stateside at the Paramount

The Amazing Acro-Cats, one of the four “cat shows” in the United States, performs to sold-out venues across the country. Their performances delight and astound audiences of all ages. The Amazing Acro-Cats not only perform, but also educate the public. Samantha teaches the importance of, “Clicker Training” and how it can improve your cat’s life, and also be useful in the event of an emergency situation.
January 17 & 18
Shows are at 4pm and 7pm on Saturday and 2pm and 5pm on Sunday (doors open one hour beforehand), $28 and up

Welcome to Agrabah, City of Enchantment and the fantastic tale of the street rat who became a prince! All of your favorite characters from the hit Disney film – Aladdin, Jasmine, Iago, Jafar, the Genie, and more – are here in Disney’s Aladdin Jr., a musical adventure filled with magic, mayhem, and flying carpet rides. Disney’s Aladdin Jr. features the Academy Award-winning score, with songs by Alan Menken, Howard Ashman, and Tim Rice, including “Friend Like Me,” and is sure to send you soaring through “A Whole New World!”
January 17, 18, 24 & 25
Performances at 2 and 6pm on Saturdays and 2pm on Sundays, $15

The Musical Adventures of Flat Stanley
The Paramount Theater
You know this guy! Stanley Lambchop is just like everyone else, but one night he makes a wish… and it comes true! In a whirlwind musical travelogue, Stanley – the ultimate exchange student—scours the globe to do something the world has never seen before, and learns that heroes come in all shapes and sizes.
January 18
Doors are at 1pm and show begins at 2pm, $20

An innovative and thought provoking play that shows the effects of climate change on distinct environments around the globe. Before your eyes, puppeteers transform miniature landscapes to demonstrate the effects of drought, flood and melting ice caps on the earth’s human and animal inhabitants. The tiny characters are driven to find solutions to these challenges — as population centers shift, they must rebuild, rethink and re-imagine cultural mindsets about how we live on Earth. For ages 7 and up.
January 24 & January 31
Shows at 11am and 2pm, $15 and up

Peter and the Starcatcher
ZACH Theater

This swashbuckling pirate story tells what happened before a young orphan became the boy who never grew up—the boy we know as Peter Pan. The five-time Tony® Award-winning play will have you hooked from the moment you let your imagination take flight to Neverland! In an evening of madcap fun, a dozen brilliant actors play more than 100 unforgettable characters from James M. Barrie’s Peter Pan, using their enormous talent, ingenious stagecraft and the limitless possibilities of imagination.
January 28-March 1
Wednesdays-Saturdays at 7:30pm and Sundays at 2:30pm, $25 and up

Theater Roundup for the Older Kids and Grown-Ups for January:

ColdTowne Theater
Prepare for MOVIE RIOT— a live improvised comedy double header event. Two teams of comedy juggernauts take the ColdTowne Theater stage to create brand new never-before-seen movies live on stage. From a title or song lyric, the performers will lovingly craft complete improvised films, all made up on the spot. But the fun doesn’t end there. Add in free popcorn and movie candies (and for a limited time FREE MAGARITAS), you’ll get a recipe for a killer cinema-inspired live comedy event.
Every Friday
Show starts at 7pm, $5

Hideout Theater
The Hideout presents twelve of Austin’s virtuoso improv comedians for a night of games and scenes based on audience suggestions — but only one of them will make it to the end of the show and be crowned MAESTRO for the week and awarded the coveted Canadian five-dollar bill. Also, all Maestro shows are now wheelchair accessible as they are performed in the Downstairs Theater. To guarantee a space ahead of time e-mail Artistic Director Roy Janik at roy@hideouttheatre.com.
Every Saturday
Shows at 10pm, $12 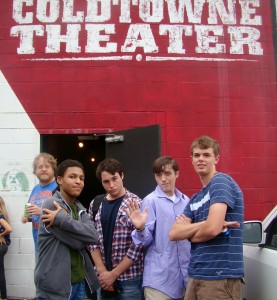 Each week, we welcome one or two troupes of young performers and an established adult troupe to improvise original shows. In addition to family friendly performances, each show features an Improv Jam. Audience members are invited to join performers on stage for low pressure, supportive and occasionally very silly improv.
Every Sunday
5-6:15pm, pay as you wish

The Mountaintop by Katori Hall is a bold re-imagining of the last night of the historic life of Dr. Martin Luther King. After giving a prophetic speech at a sanitation worker’s strike in Memphis, Martin Luther King, Jr. staggers into Room 306 at the Lorraine Motel. When a mysterious maid delivers a cup of coffee with a side of hard truth, Dr. King is forced to confront his own humanity and the fate of our nation.
January 9-25
Thursdays – Saturdays at 8pm, Sundays at 5pm, $24 (Student tickets are half-price and $3 discount for seniors 65 and up. A limited number of Pick-Your-Price Rush tickets will be available at the box office one hour prior to show time for each Thursday performance.)

Three Zisters is an amalgamation of a modern adaption of Chekhov’s Three Sisters, a literal translation of the original Russian text, and dramatic criticism of Chekhov’s work. The piece explores the innate conflict between performing classic texts and the changing roles of gender and performance in contemporary culture. Oh, and the sisters are zombies. The synopsis: The three sisters have long been dead and buried. Vershinin, Tusenbach, and Suleny exhume them with the hopes of creating the perfect women for their pleasure. The sisters, unburied and ready to adapt to a new way of life, learn that there are already very stringent expectations in place for their arrivals.
January 22-February 14
Thursdays – Saturdays at 8pm, $20 (Thursday night performances are pay-what-you-wish)

The epitome of romance! We open this fateful classic with a masked ball, where Romeo is first taken with Juliet’s beauty. Their love is further affirmed when Romeo famously declares his devotion to Juliet outside her balcony. But, as the tale goes, Romeo and Juliet’s quarreling families prevent their love from blossoming. Subsequently, the two star-crossed lovers attempt to defy their feuding families but fail as Romeo takes his life before his seemingly dead beloved only to see her awaken. Distraught, Juliet elects to dramatically join her love in death. Romeo & Juliet will feature the Austin Opera Chorus and the Austin Opera Orchestra. Romeo & Juliet will be sung in French with the English translation projected above the stage, in five acts.
January 24 and January 29
Show begins at 7:30pm, $15 and up

“Gabba gabba hey!” The Ramones had been innovating pioneers of the punk rock scene from their earliest days of playing Max’s Kansas City and CBGB, but it was the release of Roger Corman’s ROCK N ROLL HIGH SCHOOL that really made the band a household name in America. Now, almost 41 years after The Ramones first formed in New York City, Marky Ramone is showing no signs of slowing down. He continues to tour the world with his band, Marky Ramone’s Blitzkrieg, featuring various lead vocalists – including Andrew W.K. – and this winter Simon & Schuster is releasing his memoir PUNK ROCK BLITZKRIEG: MY LIFE AS A RAMONE. To celebrate, the Alamo Drafthouse has partnered with the publisher and the Long Center to create this once-in-a-lifetime event pairing one of punk rock’s most iconic drummers with the classic film that helped thrust his band into the national spotlight. Before the film we’ll have a live introduction from Marky himself, and afterward there will be an extended conversation and Q&A about his entire life story, from playing with Dust when he was just a teenager to accepting the Ramones’ Grammy for Lifetime Achievement Award in 2011. Ages 12 and up.
January 26
Show begins at 8pm, $29 and up 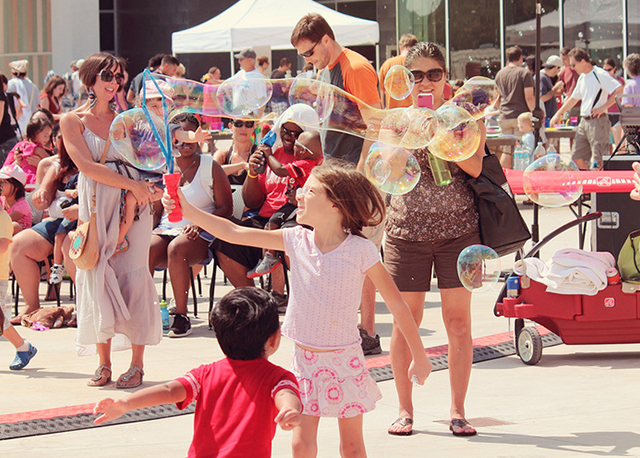