It’s been a busy summer for us so far, with work and our children’s extracurricular activities keeping us tethered to Austin. While we do have some travel on the calendar – a long weekend in Houston, a week in Colorado – I have been looking for ways to make the summertime special for our kids beyond the usual trips to the pool and snowcone binges.

So, on a recent weekend, I loaded up a bag with a couple of rubber stamps, a blank notebook, a couple of colored Sharpies, a set of clues, and the Big and Little Kids and took them letterboxing. 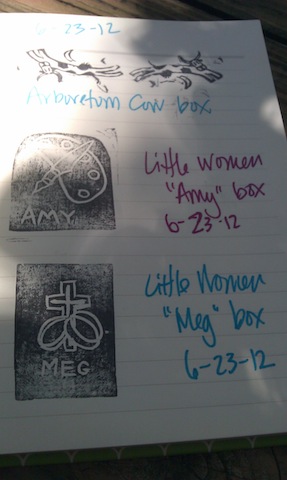 Letterboxing dates back to the 1800s in Dartmoor (a protected area much like a national park) in the southwestern region of  Devon, England, where a local guide placed a bottle for leaving visiting cards at a pool on a northern moor. This practice grew in popularity, with moor-walkers placing similar bottles and boxes in obscure places around the moor. It became a sort of treasure hunt for intrepid outdoorspeople, and eventually spread beyond  Dartmoor and into other parts of England as well. Letterboxing became popular in America in the late 1990s, right around the time geocaching (a higher-tech, less crafty and cute version of letterboxing).

Here’s how it works: a letterboxer “plants” a box in a public area (usually a park, or near some sort of local landmark). The box is usually plastic, and may have some camouflage on it, like dark tape. The box contains a notebook, a stamp, and an inkpad. The letterboxer then posts clues to find the box on the Internet (I’m pretty sure that’s the most common way to obtain clues these days, although I wouldn’t be surprised if some organizations still published annual catalogues of clues) at sites like Letterboxing North America or Atlas Quest. People then download those clues and go hunting.

When you go letterboxing, you take your own notebook, stamp, and inkpad. When you find a letterbox, you make an impression of the box’s stamp in your notebook (be sure to log the name of the box and the date that you found it), then make an impression of your stamp (including your name and the date) in the notebook you found in the box. Take a few minutes to look at the stamps that preceded you. You might find some really cool ones from far-flung destinations. Many people hand-carve their own stamps so that their record of finding the letterbox has their own unique, personalized touch. 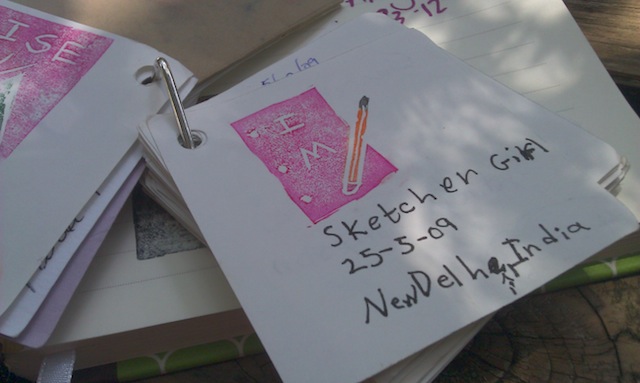 My kids were pretty skeptical about going letterboxing on the day that we went. I think the Big Kid was a little unsure because he didn’t know what I meant when I said we were going on a kind of scavenger hunt. “I don’t want to go hunting!” he said. The Little Kid was just thrilled to be included in an activity with her big brother.

Because we were crunched for time (Big Kid had one last tee-ball game of the All-Stars season), I kept us limited to the Arboretum area in north Austin, where there are a few letterboxes hidden along a quasi-rustic trail. It didn’t take long for the kids to get excited, though, when the drudgery of hiking in the heat was replaced by the thrill of finding our first box. After that, they were hooked. My son in particular really enjoyed the responsibility of being the one to actually find the box after I navigated us to the general hiding area. Both of them really loved affixing their stamps to the notebook in each box then signing their names. 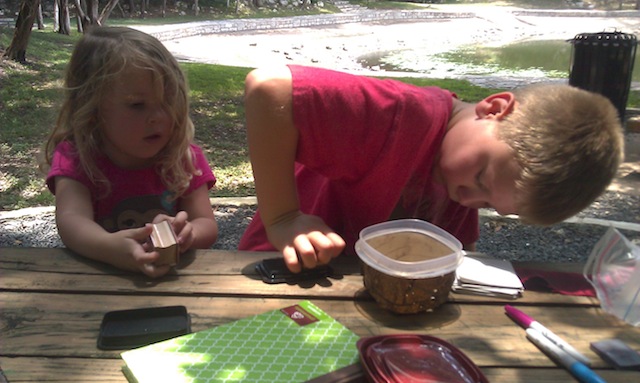 One note: The three-year-old Little Kid was maybe a little too small to traverse the rougher terrain. Our next outing will involve hunting for letterboxes in parks and more manicured hiding places until she’s a bit more agile. There are lots of little-kid-appropriate clues for this area on Letterboxing North America’s  Central Texas clues page.

My kids were so thrilled by our letterboxing outing that they were eager to go again the next day. I think we’ve found a super fun activity that everyone in our family can enjoy (making sure to carry lots of water with us, though) both when we’re here in town or when we find ourselves in Houston, Denver, or even out there in the great big world.

About the author: Melanie Haupt is a recent graduate of the PhD program in English at UT Austin. She’s a freelance writer, teacher, crafter, mama, and sometimes blogger at My Rubberbandball.