My son met Ronald McDonald this week. It was his second time in a McDonald’s. He is five years old.

My family rarely ate fast food growing up. My dad loves to cook, and being raised in Austin, we were Keeping Austin Weird before it was trendy by mostly patronizing local restaurants.

So, perhaps I was an unlikely person to be inviting other local bloggers to an event hosted by McDonald’s called the Mom’s Kitchen Day Out. McDonald’s wanted to let moms know about their effort to add more wholesome food to the menu and to take us into the kitchen to see how food is prepared. While we know that McDonalds’ does not appeal to everyone, considering that they serve billions of people across the world, I was interested to hear what the company representatives had to say. 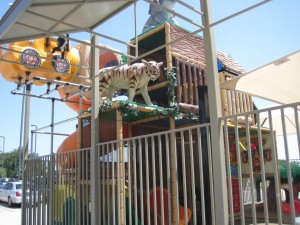 The tour was at the McDonald’s in Avery Ranch. The location was fairly new, with a fireplace in the middle of the dining room (reminding me of Panera or La Madeleine). The outdoor playscape was large and made to look like a jungle and was a big hit for my son (who still fondly remembers the other McDonald’s playscape from our trip back from the coast).

We arrived and picked out what we wanted to taste from a special menu, including, among other options, oatmeal, their Asian Chicken Salad and the Fruit & Walnut Salad. I chose a Strawberry Banana smoothie and a Caesar Chicken Salad.

Then, we heard from three franchisees from San Antonio and Austin. The owners talked about the Ronald McDonald House and their other philanthropic efforts, their pilot recycling program with the City of Austin and how the corporation is taking steps to help its employees practice more healthy eating habits. A marketing representative directed us to the places online and in the store that you can learn about the nutritional information about the restaurant’s food, as well as Bag a McMeal on the McDonald’s website, which allows you to see the nutritional content of an entire meal of your choosing. The representative also pointed out that there is a lot more room for substitutions in the menu now, which allows you, for example, to order the oatmeal with or without the brown sugar, making it a healthier option. 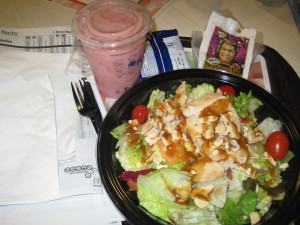 We then had a few minutes to eat the food we had ordered. The Strawberry Banana smoothie was good, although it is sweeter than what I make at home. The chicken in the Caesar Salad was tasty — certainly better than I was expecting. The salad came with sliced toasted almonds and Newman’s dressing. In all honesty, I scarfed it down pretty quickly without really evaluating every bite since I was busy taking notes during the presentations when I probably should have been eating.

The Kitchen tour was our next stop. A 17-year McDonald’s Operations veteran showed us the kitchen, break room and walk-in freezer. I heard several times, “We don’t flip burgers here”, as if it were wrong to do so. I think it partly speaks to how food is prepared in a very uniform fashion and the volume at which McDonald’s operates.

I learned that McDonald’s restaurants receive three deliveries of food per week. We saw cartons of eggs used for the Egg McMuffins (liquid eggs are used for the other menu items). We also saw how each separate container of tomatoes, lettuce, pickles and the like were tagged with a time (i.e., 12:00) so that each would not go longer than 2 hours without being replaced. Although McDonald’s is working to emphasize its healthier menu options, our tour guide admitted that french fries are still the most popular menu item. He emphasized that if you aren’t satisfied with your french fries or another menu item during your visit, you should take them back (probably something all restaurant owners would prefer, instead of angry blog or Yelp posts). 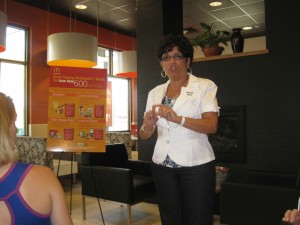 In addition to learning about how the restaurant prepares its food, we also heard a little about McDonald’s food safety procedures. We saw a sink in the middle of the kitchen floor and found out that employees are required to wash their hands every 30 minutes while at work. Employees use a pyrometer to check food temperatures at least two times a day, and restaurants have a thick logbook to keep track of oven, fridge and freezer temperatures.

During and after the tour, we were encouraged to ask questions, although perhaps like me, most of us were digesting (literally and figuratively) a lot of information about the company, its food and its practices. The participants were not paid to attend, but encouraged to write blog post about the tour and our experiences.

I certainly learned a great deal during the tour. Granted, there are many unhealthy items on the menu, and I doubt America’s love affair with the McDonald’s french fry will come to an end anytime soon. But I can’t fail to recognize (again) that billions of people go to McDonald’s every day, and having healthier options to choose from is a step in the right direction. Since it was clear that the owners and the company want to hear what moms have to say about McDonald’s, I encourage the corporation to expand its healthy menu options and incorporate whole grains into the menu. As a mom, I would love to see a grilled chicken sandwich offered in a happy meal. I would also welcome cutting the fat and sodium in existing products to make it easier to choose a healthier option.

Will I now visit McDonald’s daily? No. Does my son now notice and ask to go to every McDonald’s we drive by? Yes. If I have the choice between McDonald’s and another fast food chain on a road trip, will I consider McDonald’s, knowing there are some healthier options? Probably. 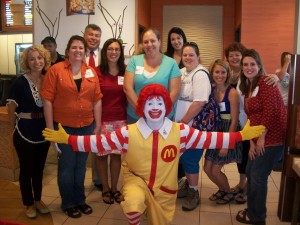 The second Mom’s Kitchen Day Out is happening in mid-July. We still have a few spots left, so if you are a blogging mom and would like to join us, please email us at nicole@livemom.com.

Are you a McDonald’s lover or hater? Did you know about the restaurant’s healthier menu items?

Disclaimer: As a part of the Mom’s Kitchen Day Out series, I sampled new and existing wholesome items off the McDonald’s menu and received a goody bag with coupons. My son also attended and received snacks during the tour. LiveMom was not compensated financially for our help in organizing the event. There was also no agreement between McDonald’s and LiveMom or any of the bloggers in attendance to write positive reviews.