I was really excited for the chance to take my boys to see ZACH Theatre’s newest children’s production of Pinocchio. My two older boys have enjoyed live theatre, but my youngest has always been too wiggly and too noisy for me to entertain the idea of taking him to see a play. But this production, aimed at kids ages 5 and up, looked like a perfect opportunity for his first theatre experience.

When we walked into the intimate setting of ZACH Theatre’s Whisenhunt Stage, it was as if we stepped right inside Geppetto’s carpentry workshop. Centered in the middle of the round room were his work tables, tools, and various parts of toys that he was constructing. The room was fairly darkly lit, and my youngest was immediately worried that he’d be scared during the show. (He is in a current phase where everything has the potential to scare him — the dark, bad guys from comic books, make-believe monsters under the bed, even broccoli.) But once the play was underway and he got caught up in the magic of Pinocchio’s adventures, he whispered to me with a smile that he was not scared.

But little did I realize beforehand that this script was actually perfect for my youngest son who’s currently facing his typical childhood fears. One of the themes of this production was fear — or rather, overcoming fear. Geppetto was a master at imagining grand stories inside his workshop but was afraid to step out into the big, scary real world. It wasn’t until the end of the play that Pinocchio helped him realize that he need not be afraid when he had a loving partner to venture with him through life. Trust me, it was touching, and there were tears shed by several adults in the theatre that day.

The production used inventive puppetry to capture the wonder and imagination of the audience members. You could hear several tiny voices whispering questions, comments of awe, and of course there was lots of laughter, too. Pinocchio included such a variety of puppets including shadow puppets, finger puppets, rod puppets, and a doll held by a puppeteer. The styling, lighting, and effects of this production were all very magical. And this type of magic made it a terrific “first theatre” experience for my youngest son.

Pinocchio will be playing at ZACH Theatre through May 24th, 2014 on Saturdays at 11 a.m. and 2 p.m. and Sundays at 2:30pm. The show lasts one hour and is geared towards children ages 5 and up. You can find ticket and general information on their website.

ZACH Theater provided LiveMom with tickets to the show for free. There was no compensation for this review. All opinions expressed are my own.

Review and Giveaway: The Little Mermaid at ZACH Theatre 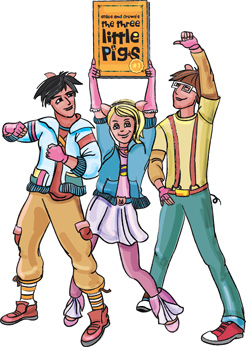 The Three Little Pigs: ZACH Reinvents a Classic and GIVEAWAY