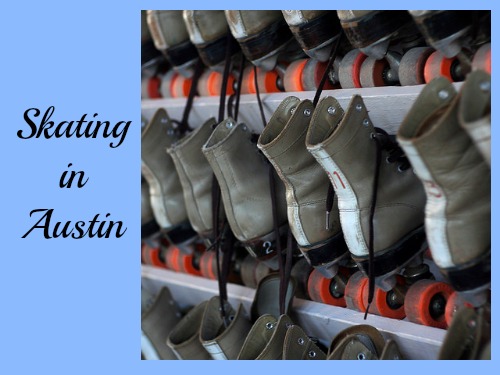 “Roller Skates” by Chad Kainz is licensed under CC BY 2.0

You can also win giveaways throughout the entire summer just by uploading and tagging (#AustinSummerFun) a photo of your child(ren) doing something from the Summer Fun Checklist. You won’t want to miss out with prizes that include a $25 gift card that can be used at Galaxy Cafe, Zocalo Cafe or Top Notch Burgers, tickets to a Round Rock Express game, $50 Terra Toys gift certificate, free hair cuts from Birds Barbershop, and more! A winner will be chosen each Friday morning so be sure to get those Summer Fun photos tagged by midnight each Thursday. For complete rules, click here.

Going roller skating with friends and ice skating at Chaparral Ice are a couple of items on the checklist in June and July so we thought we would round up all of the indoor and outdoor skating options in the Austin area.

Whether you prefer indoors or out, close to the rail or out on the ice, Austin has plenty of places to get your skate on. Head to these spots for the most fun on four wheels:

Austin Roller Rink – This rink located behind Cafe 1626 offers skating and arcade games during the summer from noon until 4pm on Tuesdays, Fridays and Saturdays and 1-5pm on Sundays. Thursdays from 3-8pm is Family Night with $5 skate rental. Older kids might enjoy spending Fridays and Saturdays at the Rink from 7-11pm. Adult skate night (which is BYOB) is on Wednesdays from 7-10pm and skate rental is $5.

Chaparral Ice – If you prefer your skating on ice, head on over to this rink during public skating hours. On Mondays until Thursdays, public skating lasts from 10am until 5pm. On Fridays, you can skate from 10-11:30am and then from 1-5pm and on Saturdays and Sundays, public skating hours go from noon until 4pm. On a few Friday nights later in the summer, you can skate from 6:30 until 9:30pm. Chaparral Ice also offers skating lessons and camps. Admission costs $6 and skate rental is $4 (kids 5 and under skate for $5 on Saturday and Sundays, including skate rental, and free in the afternoons during the week with paid admission). Free skating lessons are available on Saturdays at noon for beginners ages 6 and up (you still need to pay admission and skate rental). Group rates are also available.

Millennium Youth Entertainment Complex – The MYEC offers roller skating on Wednesdays and Thursdays from 10am-6pm, Fridays from 10-11am and Saturdays from 11:30am until 10:30pm. Adults are $4, kids are $3, skate rental is 50¢ and the fee for observers is 99¢. Fridays are Family Fun Days, with $3 for adults, children and observers (including skate rental). For groups of 10 or more, admission plus skate rental is $3.50 and for groups of 75 or more, the fee is $3 per person. The MYEC also offers adults only nights. The Complex also offers bowling, an arcade, movies and a food court. Call (512) 472-6932 to confirm skating times and for more information.

Playland Skate Center – Open since 1973, this 27,500 square foot facility has been a crowd pleaser for Austinites for generations. Open from noon until 6pm Monday through Friday during the summer, Playland also offers Family SK8 Night on Thursdays in June and July from 7-9:30pm for $5 admission and skate rental (regular price is $8). Playland is also hosting a Lock-In on June 20th with fun, games and prizes. Playland offers “Skate Mate” rentals (which look like a walker and help new skaters with balance) and admission to a large playscape in the back for an additional fee. You can get free passes to skate through Kids Skate Free this summer. Lastly, Tuesday nights are adult only hours, starting at 7:30pm (MNO, anyone?) Playland also has arcade games and a snack bar.

Austin BMX & Skate Park – It’s rare to drive by this skate park, close to Shoal Creek and House Park, without seeing it bustling with activity. The park is open from dawn until dusk, and during the summer it’s great to get there as early as possible to avoid the heat. The bowl and various ramps are designed for all skill levels. FREE.

Benbrook Ranch Park – This park, which opened in 2008, offers soccer and softball fields, trails, a disc golf course, a playscape and a skate park. FREE.

Mabel Davis District Park – Opened in 2005, this popular 12,000-square foot skate park was the first to open in Austin. There is a playground, trails, basketball courts, picnic areas and a pool nearby. FREE.

Northeast Metro Park – Located in Pflugerville, this park has soccer and baseball fields, multiple playgrounds and a skate/BMX park which opened in 2012. The skate/BMX park is located the furthest back from the road, and is open from 8am until 10pm. There is a water play area closeby. FREE.

Patterson Park Miniramp – Patterson Park has a miniramp right next to one of the parking lots. There is also a shady playground and neighborhood pool nearby. FREE.

Shayla Dame Skate Park – This 14,000-square foot skate park is located behind the Clay Madsen Rec Center in Round Rock. The park is open from 6am until 11pm daily. FREE.

Veloway – The Veloway is 3.1-mile paved concrete loop exclusively for bicycles and rollerblading. There is also a secondary one-mile loop available by taking a right next to the entrance. No foot traffic is allowed. The loop is open from dawn to dusk. FREE.

What’s your favorite place to skate in Austin? 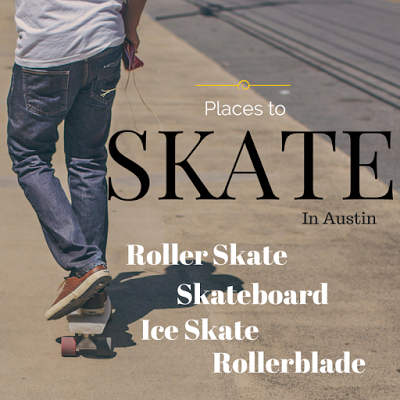 Where to Skate in Austin