*This giveaway is now closed. Congrats to Cookie on winning! Thanks to all who entered.

You know how Ariel and Eric unite to live happily ever after in the Disney version of The Little Mermaid? That’s all fluff. That’s not the stuff of real life. In Nat Miller’s adaptation of Hans Christian Andersen’s The Little Mermaid, the youngest mermaid of the king’s daughters has a different journey, one that follows the original fairy tale.

The little mermaid is the youngest daughter of the king whose castle lies in the deepest part of the ocean. She yearns desperately to see the human world. On her fifteenth birthday, she rises to the top of the water to witness an unfortunate accident that happens to the young prince aboard a fancy boat. The mermaid rescues the prince and safely deposits him on the shore.  She then decides that the true meaning in her mermaid life is to become a human. The grass is always greener on the other side, and this saying certainly holds true to how she feels. 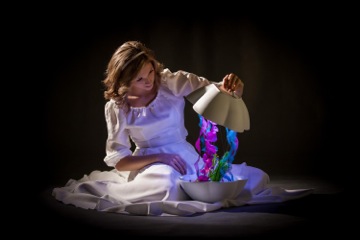 After striking a deal with a very scary witch, the young mermaid has to make what is certainly the toughest decision of her life: should she give up her family, her tail, her voice and endure a life filled with physical pain to be with the one she loves (the young prince, of course) or should she stay at the castle with her family to live out a life of sea boredom.

In case you are not familiar with the original story, I am not going to reveal what happens and ruin it for you. I was as eager as my six year old to see which decision she makes. Would she really give up her life in the sea for a man she hardly knew? The suspense was killing me! 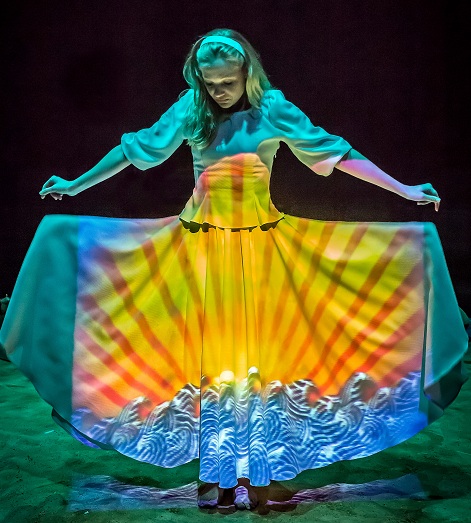 Miller’s adaptation of The Little Mermaid takes place on the Whisenhunt Stage at ZACH Theatre, a small, intimate amphitheater-like setting. The play is acted out entirely by one woman, Megan Richards, who does a fantastic job. With the use of props, special lighting and a costume that helps bring the story to life, it was easy to get swept up into the drama of what the mermaid is going through.

After the show, the Dramaturg held a Q&A session which was a nice surprise as the kiddos got to talk about the emotions they felt during the play. They also had a chance to ask the director and actor questions. I enjoyed the show as it opened up some dialogue between me and my daughter about choices that we make in life. It is recommended for ages six and up due to some scary scenes.

Would you like to win two tickets to next Friday’s performance? Leave a comment here or fill out the form below for your chance to win. All comments and entries must be posted by 9:00am CST on Tuesday, May 7, 2013. The winner will be notified via email with 24 hours to respond to claim the prize. There is no cash value. You must be 18 years or older to win. The tickets are non-transferable. By leaving a comment or submitting the form, you agree to the above terms and conditions. 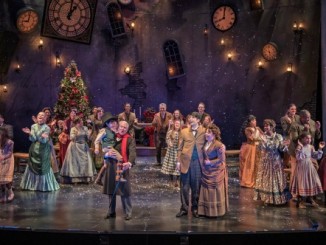 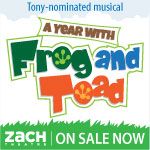 A Year with Frog and Toad Giveaway