The first two days we visited the Children’s Museum of Houston and the Space Center Houston. Day three we headed out to the Houston Museum of Natural Science, which I have visited as a kid. I was a little intimidated by the fact that I kept reading everywhere that the Museum is one of the busiest in the country, and Spring Break would be especially crowded, so I was glad to learn that some of the Houston school districts were not on Spring Break at the same time as us. The website still mentioned that parking might be gone and when I called the Museum to ask for advice, the person who picked up recommended we arrive an hour before the Museum opened…!….

We did arrive right when the museum opened at 9am and had no trouble parking (be ready for the $10 parking fee for the garage). I should mention that my phone’s GPS took me all over the place and so it might be best to take a look at a map before you go since there are a bunch of museums closeby and the road signs only served to confuse me. Exhale. I decided to add on tickets to the Cockrell Butterfly Center, since I had also visited when I was little. With the CityPass, the admission was slightly less to see the butterflies. 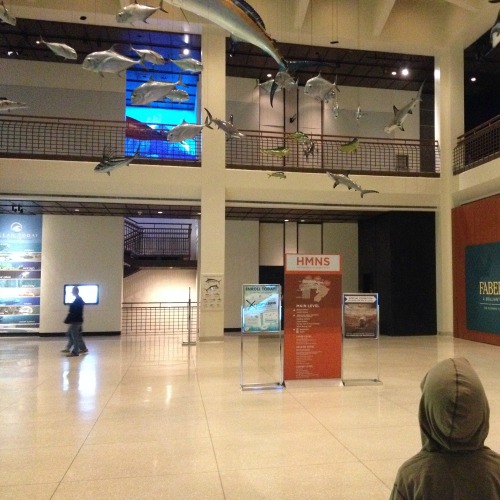 We started our visit in the atrium, which I instantly recognized from my childhood. From there we headed to the Wiess Energy Hall, which explored the science behind oil and gas exploration. Most of this was over my 8-year-old’s head, although we both enjoyed our time in the Geovator, which simulated the experience of going down to the bottom of an oil well. There were screens everywhere which drew my digital native in and lots of hand-on exhibits. We also were mesmerized by the pendulum at the entrance to the exhibits, which slowly knocked down small pins placed around the orb’s path. 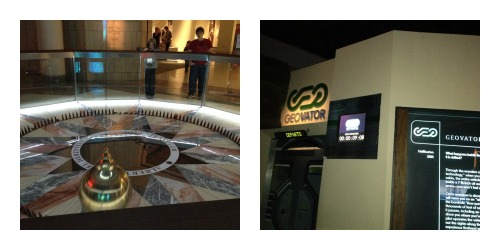 We then made our way upstairs to the Hall of African Wildlife. Although my kid prefers the real live kind of animals, we still spent some time taking in the scenes. We also walked through the Hall of Texas Wildlife, which is now undergoing renovations. The dioramas were more detailed than the exhibits at the Texas Memorial Museum, and of course it’s always fun for 8-year-olds to try to spot the poisonous snakes and scorpions. We then checked out the Hall of Gems & Minerals and the Gem Vault. My son had recently studied minerals at school and there were truly so many to look at. The atmosphere was almost reverent in the Hall — the displays almost jumped out at you in the low lighting.

I would have never been able to guess the name for the study of mollusks before visiting the Museum, but now I know: malacology. We browsed through what seemed like hundreds of shells in the Hall of Malacology, some of which were quite huge. We found a tank of real, live horseshoe crabs in a corner and my son loved watching them for a few minutes. 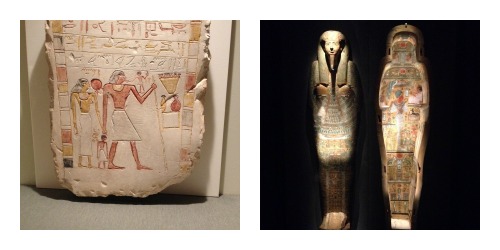 From there, we ventured up to the third floor. We first visited the Hall of the Americas, but the exhibits didn’t hold my son’s interest (which was a bit of a bummer, since I was interested to spend more time there). We had recently visited the National Museum of the American Indian in DC, so perhaps the exhibits were too similar in nature. We spent more time in the Hall of Ancient Egypt, with its mummies and other interesting artifacts.

We decided to break for lunch after finishing up with the third floor. I had seen that the only dining option was the McDonald’s at the Museum (and no outside food is allowed) and so I had scouted out a taco place within walking distance, but again, convenience won out and we ended up grabbing food and getting a table in the courtyard. Although we headed downstairs early, the tables were already all taken, and so I would imagine that during the lunch hour on a crowded day you might end up sitting on the floor to eat. Luckily, the chilly Spring Break weather was burning off, so it was really nice to get some fresh air outside. 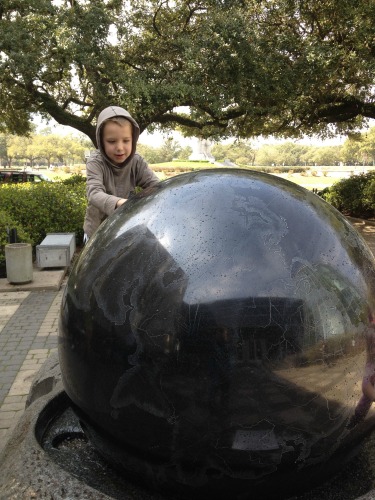 A cool feature outside is the Kugel Ball, which is a 5,000-pound black granite sphere which is perfectly balanced and rotates, thanks to a water pump underneath. The Ball is irresistible for kids to reach out and touch. Not only is the ball cool in and of itself, but it has the continents etched on it, so it’s neat to try to find North America and other familiar landforms. Kids can get damp, but won’t get too wet interacting with the sphere. 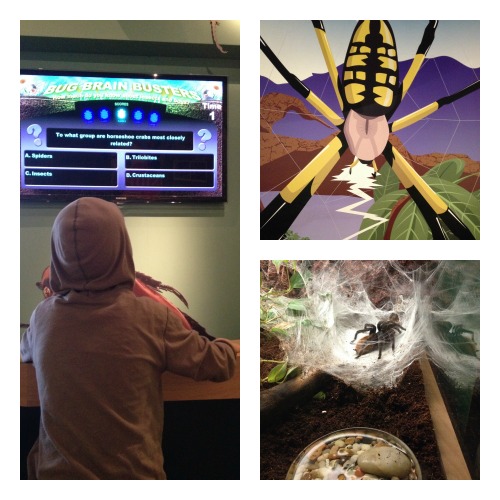 Since we were closeby, we decided to visit the Butterfly Center right after lunch. I remembered the huge, multi-level outdoor area from visits when I was younger, but there is now a lot more to this part of the Museum. Side note: make sure to keep your tickets, handy since this requires a separate ticket. We probably spent 20 minutes at Bug Brain Busters, which was a game for up to 5 players to test your knowledge on all things insect-related. We then checked out the animal inhabitants of the exhibit (why do these museums always seems to contain my worst nightmare, the Madagascar hissing cockroaches?) Then we headed out to the top floor of the outdoor butterfly garden and made our way down. 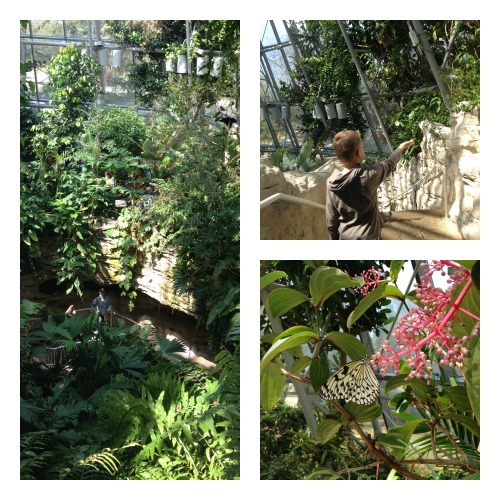 Seeing all the butterflies flit around you is very stunning, although we never had one land on us. There are so many different varieties of butterflies and several feeding stations where the winged creatures would congregate. The temperature was noticeably warmer inside, which was welcome for us. On the ground floor when you exit the outdoor space, there are more exhibits and restrooms and even a vending machine selling insect-laden eats (ewwww). 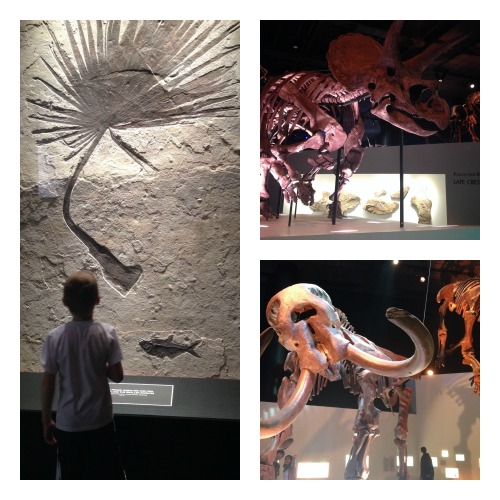 We then made our way to the Hall of Paleontology. This part of the museum was pretty amazing. The walls and niches were all white, which made the installations really stand out. My son was never very interested in dinosaurs, but dino lovers could spend quite a long time here. 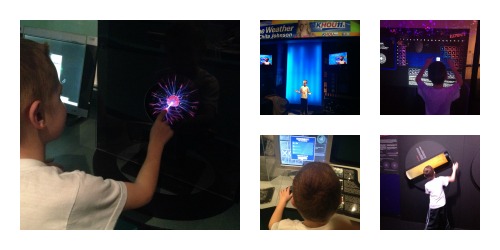 With the promise that a visit to the gift shop was getting nearer and nearer, my kid ventured downstairs to the Hall of Chemistry. It was a bit eerie when we thought we were the only visitors down there, but it was also kind of nice. Similar to the Energy Hall on the ground floor, the chemistry exhibits were a bit over my child’s head, but there were a few hands-on exhibits he made a beeline to. The Earth Forum was right nearby, and he loved pretending to be a weather newscaster on the way in and making the other families nearby laugh. The Earth Forum is 11 workstations, so for the most part kids are sitting completing different games and activities.

I will admit that the gift shop is great (and huge) so I ended up getting a few extra things to bring back for myself. We left the Museum at 3:30pm and headed back to the hotel. 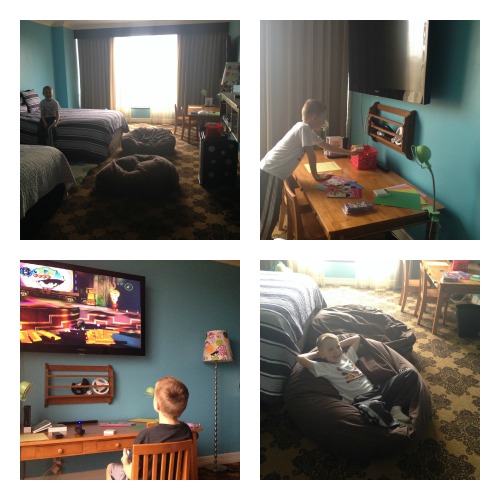 We were lucky enough to reserve the Kid’s Fantasy Suite at the Omni that night. My child was in kid heaven with the chalkboard wall, the Wii, the glow in the dark stars on the ceiling, the mini fridge, the DVD player (complete with videos), the art table and the beanbag chairs. I was thrilled to have a room to myself with a huge bed and the peace of mind knowing that I wouldn’t be waking my kid while I was tapping away on my laptop after bedtime. 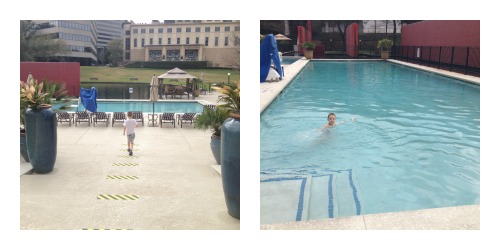 Since the weather was warmer and we would be checking out the following day, we took the opportunity to test out the heated pool. It was still a bit chilly for me, but my son didn’t seem to mind.

A friend recommended Ruggles Green for dinner and I couldn’t have been happier to sink my teeth into a spinach salad after eating not-so-healthy food on the rest of the trip. The restaurant reminded me of Austin, with its friendly staff and health-conscious menu. I wished I had gone there earlier!

We were both excited to wrap up our Spring Break adventure with a trip to the Houston Zoo the following day, so we packed up and headed to bed. The Museum of Natural Science was a hit for both of us, with the high points probably being the Egyptian exhibits and the Butterfly Center.

Have you visited the Houston Museum of Natural Science? If so, what are your favorite exhibits?