I like to think of myself as a sporty kind of gal. But somehow, we never made it to a Round Rock Express game. A combination of not knowing much about baseball and the drive to Round Rock and the somewhat late start times were a deterrent, truth be told. We even had a few false starts when I tried to coordinate with other families to go, only to have plans fall through. This summer, though, I was determined to make it happen.

I had been looking at the schedule, and trying to decide which game to choose. Fireworks on Fridays sounded appealing, although I was doubtful we’d stay until the end of the game. There are promotions practically every game. I finally noticed that the Express had a few earlier games coming up, so I selected one with a 6:05pm start time in late July. I was excited that I was able to convince another family who was in town and up for meeting up there who had never been, either.

Here are my observations:

The fan experience is a priority. I don’t have much to compare the Express to, but it would be difficult not to be happy with the Dell Diamond. We arrived right when the game started, and parking was a breeze. We drove by the Salt Lick on the way to our parking spot (genius idea!) and only had a short walk to the entrance. It was 80s Night, so great tunes were playing over the loudspeakers, with a free postgame concert by the Spazmatics. We had all kinds of food and drink options to choose from, and the prices weren’t outrageous. Although we did end up leaving before the game was over, we encountered no traffic. We happened to go to a game the same week that I drove to Blues on the Green and the Zilker Summer Musical, and it was easier to get in and out at the Express game.

My son is currently in a football card collecting phase, so he was really interested in getting an autograph, and somehow we arrived right when a pitcher on the other team was signing autographs, so my son got his program signed. We didn’t even explore the Fun Zone, which I know has all kinds of things to keep kids entertained during the game.

Lawn seats are just fine. I agonized a bit over what kind of seats we should get, and when we arrived we found out only lawn seats were available, which worked just fine. Lawn seats are the cheapest, under $10 a ticket, and about a third of the lawn was in the shade during our game. Even when we arrived, when the game was starting, we were able to get a spot along the concrete berm-like strip at the top of the lawn, so we could rest our backs on something during the game (yes, we are old). My husband suggested we might try to get a seat behind home plate next time, and I could go either way. I did bring a blanket, although it wasn’t quite enough to cushion us, since we chose to sit against the concrete for a few hours.

Don’t let weather keep you from a game. The temperature was pushing 100 degrees the day of the game, and the walk from the parking lot to the entrance was foreboding. Somehow, when we entered the stadium and found a place in the shade, we had no problems with the heat. I’d still bring a sunscreen, sunglasses and a hat just, in case. Needless to say, the weather got cooler as the sun went down.

Baseball is fun. Although no member of my family is a big baseball fan, we all really enjoyed watching the game. I was shocked that we stayed until the last inning, since we had lasted only an inning at a major league game just a few months earlier. The Express won the game and there were quite a few runs, so that was exciting. Next time, I’ll have my son bring a glove so he can try to catch any home runs. I might also bring binoculars if we are on the lawn again. I’d love to try to make it for the fireworks or other special event the next time I go.

I know plenty of you have been going to the Express games for years, so feel free to share any suggestions about going with the family below in the comments. We’ll definitely go again next year!

Back to School Music Bash 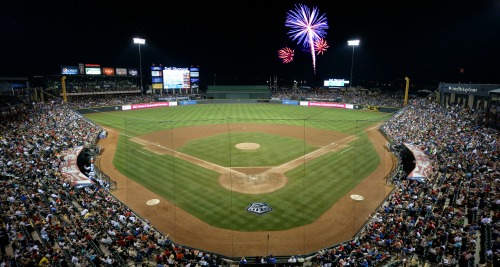