My friend Courtney has mentioned a local coffee shop called Hot Mamas on a couple of different occasions over the past year. I felt inclined to check it out since it’s called Hot Mamas. After all, I’m hot (because it’s always so freaking hot here in Texas) and I’m a mama. Courtney is an artist and has a studio/ art school downtown, so I rely on her for recommending hip, artsy places to go. Me, I’m not so hip and totally feed of other people’s hipness. So, I took her recommendation and rounded up Bonnie for another one of our adventures. Bonnie is hip, too, and I thought she might be impressed with me for taking her someplace so cool. 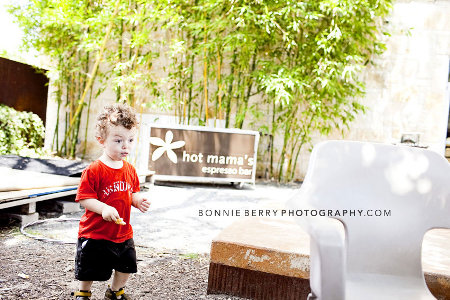 I don’t really know what I expected, but with a business name like Hot Mamas, I pictured the place being owned by a couple of moms- a couple of really hot moms. Yes, I thought I’d walk in and be like, “Wow, that woman is super sexy AND she’s a mom. I need to go workout after this to look that good, too.” Come to find out, it’s not owned by moms, but by a nice gentleman who bought it not too long ago from the original owners (maybe they were hot mamas… I’ll never know). In my vision of the place, I also thought it would be stocked with a nice selection of toys because it was potentially owned by moms. And how cool would that be to actually have a super kid friendly coffee shop on east 6th Street? There wasn’t a toy section visible, so I asked the owner if they have anything to entertain the kids and he said there were some hula-hoops outside. He came around a couple of minutes later and handed me a white paper bag with a few pieces of sidewalk chalk in it. The chalk was an excellent idea, but the only sidewalk I saw for them to draw on was the one in front of the building- close to the street. It would be great if an adult went with the kids to watch them since there were many cars zooming by, but I wasn’t in the mood to sit on the sidewalk, so the chalk was left unused this time around. 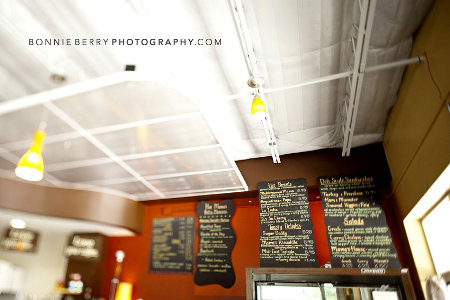 The inside is set up like many other coffee shops with sofas, a few tables and such. The inside is somewhat of a small place, so it wouldn’t really work for large gatherings, but the outside patio area certainly makes up for any lack of space on the inside. Bonnie and I stood for a few minutes trying to decide what to order for lunch as we looked over their menu that was hanging above on a chalkboard. All of the food selections were reasonably priced for lunch; salads and sandwiches cost right around the $6-$7 range. I ordered chicken curry salad and Bonnie got a chicken curry sandwich. Apparently, we were both in the mood for curry that day! 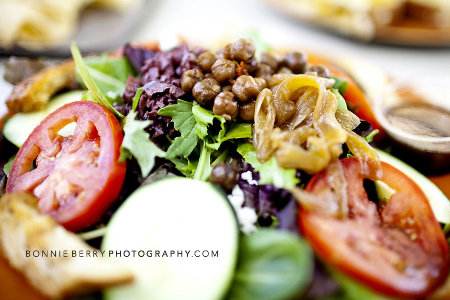 Although they did not have a specific menu for kids, we asked if there was anything that was available in a smaller portion and they recommend that we get them a half grilled cheese sandwich. I noticed that one of the daily specials was lavender lemonade and ordered a glass of that to share with my two year old. She loves lemonade and also likes to eat lavender. Seriously, she picks the leaves off of our lavender plant and eats it straight, right there. She also does this with our basil, sage and rosemary plants. So, I thought she might be extra thrilled to have her favorite drink- lemonade- infused with some lavender. I’ve had lavender lemonade in the past and enjoyed it, so I was looking forward to sipping this one as well. I was disappointed because it had such a very overpowering lavender taste to it- so much so that you really couldn’t taste the lemonade in it. Bonnie tasted it and agreed with me that it was just too much. But Luci, my little herb eater, actually loved it so much that she asked for more of it later on in the day. 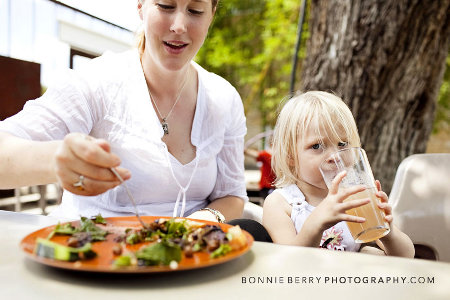 We made our way to the outside patio, which is a very cool modern design with lots of metal, concrete and pebbles. Sam, Bonnie’s little boy, immediately found the pole that had water coming from it and off he went to play (and get soaked) while Luci sat and took in the surroundings. The food was out to us in no time at all. Luci and Sam ate the yummy grilled cheese sandwich without any complaints. Yes, the sandwich was certainly a hit, as it was cheesy and creamy at the same time (they put some type of creamy mixture on it in addition to the cheese). It takes Luci a while to warm up to her surroundings, but soon enough, both kids were having a good time playing with the water pole and exploring the patio. 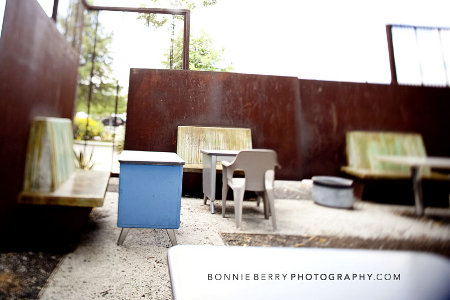 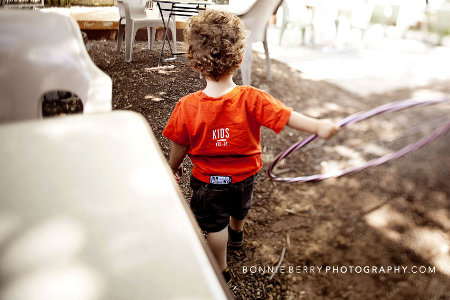 The hula-hoops were also entertaining for the kids as they looped them around their little bodies and tried to make them go. But I wondered if they were really there for the random, occasional kids who come in or if they were there for the adults. Are they holding hula-hoop contests? If so, why isn’t that publicized? Or are they really there for the people who end up having one too many drinks to play with and make fools of themselves all for the entertainment of the sober patrons? Suspicious. I’ll have to ask next time I’m around. 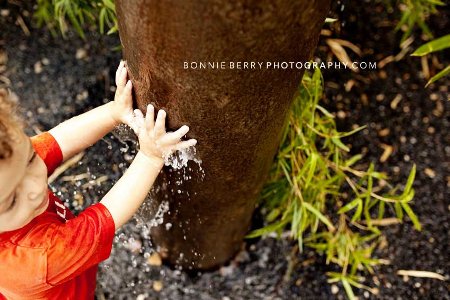 While the kids were running around, Bonnie and I were trying to sit and eat our lunch. You know how that goes with young kids! My salad was pleasing on both the eye and the tummy, but it was missing the chicken. I didn’t really mind the missing meat because I generally prefer meatless salads, but the fact that it was missing kind of bothered me just because it should have been there. Despite the missing chicken, I ate it up and enjoyed it. Bonnie’s sandwich was tasty with pieces of chicken drenched in curry on white bread with diced Granny Smith apples placed on top. It seemed like it was a bit hard to keep together like that while eating because the apple pieces could easily fall off, but Bonnie held it together like a pro. 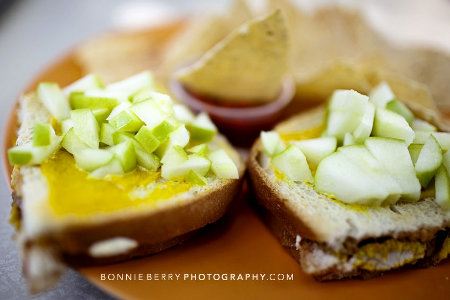 The ideal coffee shop, or restaurant for that matter, would have a space that’s enclosed and full of things to entertain the kids. It doesn’t even have to be toys that entertain, but water, sand, rocks, plants…. all of those items keep kids busy and distracted to give the moms a break. Our one complaint about the set up at Hot Mamas was the openness of the patio. There was no fence to enclose it and the water thing that they ended up spending the bulk of their time playing at was a little too close to the street to make me uncomfortable. If you can manage to somehow keep your kids in, it’s a nice place to check out if you want to try something new in the ever up and coming east Austin area. I think that’s exactly what that area needs to complete it, more kids and families roaming around instead of a bunch of hip, young singles! I think we should plan a nice little invasion. You in? 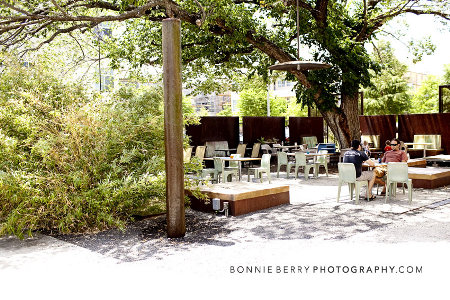 All photos were taken by Bonnie Berry Photography.

2 Comments on She Said, She Saw: The Adventures of Lazygirl and LiveMom