One of the perks of raising my kid in my hometown is the opportunity to revisit places from my youth. As much as us locals tend to boo hoo about the passing of local establishments (I try to avoid that, as I see many benefits to the new places which have sprung up since I was wee), many places evoke fond memories for me. One of those long-time hangouts is Halcyon Austin.

Sitting in a prime location, on the corner of 4th and Lavaca, this coffee shop has been around since 2002 and was preceded by the original Ruta Maya. It was a place my friends and I would hang out in high school and pretend to be older than we were. At night, it was some of the best people watching around in what was then a much different downtown. I still think about it every time I walk or drive by.

I don’t tend to spend much time in coffee shops these days, but Catherine loves to check out new ones, and we’ve even written up some Bullet Point Coffee Shop Reviews when we’ve been out and about. Somehow, I discovered she also spent time at Ruta Maya in her single days and that we waxed nostalgic about our good times there.

Recently, I learned that Halcyon has s’mores on its menu. There’s just something about s’mores that I love. I know dark chocolate is all the rage, but give me a Hershey’s bar and I’m a happy camper. Maybe it’s another memory from childhood, maybe it’s the process, but I barely ever pass up the chance to make them. It seems as though my 8-year-old has also developed an appreciation for this gooey, sweet treat. I spent some time up in the Washington, D.C. area and a coffeeshop/lunch spot, Così, also had s’mores on the menu, and my friends and I definitely ordered them a few times. When I got around to thinking about what should go on my bucket list for Austin this year, this had to be on there. 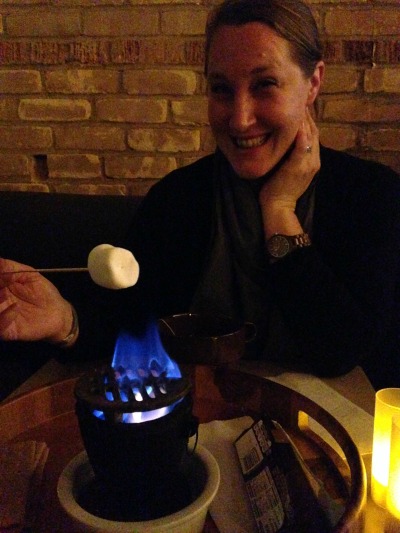 Catherine and I were at the Austin Music Hall for the Ben Howard show in January and wanted to take advantage of being downtown to hang out for a little while longer. She had the brilliant idea to get some s’mores, so we walked over to Halcyon. As usual, the place was buzzing. I quickly sat down in an open but unbussed table on the outdoor patio. Heat lamps made it bearable, even though it was a bit chilly, being mid-January. Catherine went in to order and learned that Halcyon requires that you eat the s’mores inside. When our order was ready, an employee managed to find us an intimate two-seat table so we could get down to s’more-eating business. It was great to catch up outside of the show and feel a part of such a happening place. We even struck up a conversation with a young couple next to us, and managed to find out we had a friend in common. As much as things change, the night reminded me that Austin can still be a small town sometimes.

Although I enjoyed having s’mores with Catherine, I knew my son would really love it, so I made a plan to head down to Halcyon on a Friday after school. Although the week had been chilly and cloudy, the sunshine was out by pick-up time and we took it in on the short drive downtown. At 3pm on a Friday, I was able to snag street parking on the same block as Halcyon, and it was definitely a daytime crowd there. Half of the coffee shop was occupied, with a pretty even split between people pecking on laptops and small groups of friends hanging out. My son ordered a slice of pumpkin bread and I got a latte in addition to our order of s’mores.

My son was mystified when the order came. It took a few minutes to show him how to make a s’more, but as you might expect, he quickly got the hang of it. When compared to roasting a marshmallow in our fireplace, the Sterno worked very quickly. I was even hard pressed to take photos while overseeing the process and attempting not to singe my marshmallow. It all worked out great, of course, and we had some good laughs as we made our way through the materials. We didn’t stick around long, but my kid was quickly swaying to the music and, of course, managed to get marshmallows all over himself. Mission accomplished.

We were in and out of Halcyon in about an hour because my son was eager to get home and ride his bike, but the process might take longer if it’s more crowded inside. It’s certainly a great place to head if you need to burn some time downtown, or need to rest in between walking and exploring. Even during the day, there is some good people watching. Who knows? Maybe my son will be the one hanging out on the deck in 10 years or so, taking it all in.