While some of you spent your Mother’s Day being served breakfast in bed, I made my first batch of pancakes using spray batter. While you were relaxing in your air conditioned abode, sweat was dripping off my chin. Sleeping in? I woke up at 4:30am, freezing, and spent what seemed like an enternity listening to snoring while trying to decide whether it was worthwhile to use the restroom.

Oh, the joys of camping.

In all seriousness, we had a great time over Mother’s Day weekend at the South Llano River State Park. I hadn’t been since I was a kid, and my husband has no interest in leaving behind his creature comforts to commune with nature. So, my five year old son and I went with my Mom and Dad. 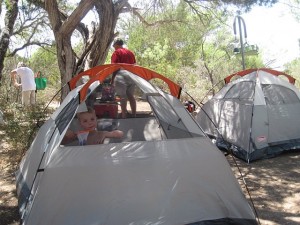 Here are a few things we learned:

I had no idea how far in advance campsites are booked. We had hoped to camp at Inks Lake near Burnet or somewhere closer by, but even several months out, everything was booked. A friend who plans an annual camping trip at my son’s school said she reserves the spot the day after they return each year for the following year! Another friend who booked in November said she had trouble finding spots for her trip last weekend. Thankfully, there are many parks relatively closeby, so it just meant going somewhere new, which was exciting in and of itself.

This was the first thing my camping “experts” shared with me, and sure enough, I’m still catching up on sleep, a few days later. Our first challenge involved our air mattresses. I don’t remember ever using them as a kid, but they seem to be a must now. Since we chose a walk-in campsite, however, we used an air compressor my dad brought to blow them up. Which took FOREVER. As in, HOURS.

I also hadn’t thought about the fact it gets dark so much later now. When it was obvious my son wasn’t asleep, I couldn’t resist having him come out to see the fireflies and look at the stars. This meant my always-to-bed-at-8pm guy went to bed at more like 10pm.

After sweltering all day, it seemed asinine to get inside my sleeping bag, but at 4:30am I changed my mind and encouraged my son to do the same. Two hours later, my cheerful (aren’t they always pleasant early in the morning?) child tapped me to find out what time it was. After thirty minutes of one-sided conversation, my bladder roused me from my sleeping bag cocoon.

Although one of the benefits of camping is how low-key it can be, I certainly found it hard to resist trying to cram too much into one weekend. You are quickly reminded you will not do the hike you did before you had kids and that the Texas sun can quickly sap your energy. Although my son is a typical energetic boy, by the end of the weekend he was tired.

That said, I can’t imagine a better way to have quality time with your family. Yes, you can get email on your smart phone, but I found it pretty easy to ignore. Without the constant commentary of home running in my mind (Did I remember to put the chicken in the fridge? I need to get the laundry in the dryer. Tonight after bedtime I need to run to Target for that birthday present…), I was able to relax in a way I hadn’t in a while.

If you leave truly feeling like there was something you didn’t get to do, just plan another camping trip later in the year or start thinking about making it an annual tradition. 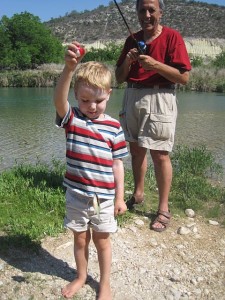 The great part about camping is that your kids will need very little to be entertained. In fact, my son required more to occupy himself in the car than in the campsite.

The walkie talkies, miniature vials of bubbles, playing cards and the frisbee went virtually untouched, although he did carry around his bug box and binoculars on his search for cool-looking bugs. My son really enjoyed having his own miniature folding chair (which I think I got at Academy a few years back). Since he sleeps with a light on in his room, I also picked up a small LED lantern from Target (under $15) which was perfect.

A friend suggested bringing an active toy, like a ball, and a “quiet” toy, like a new coloring book. She had success bringing two sketchbooks: one for her and one for her daughter. On hikes, they would stop and sketch something new, side by side.

In terms of what else to pack, a friend who was camping the same weekend posted this list, which I did find useful. We had burgers, sandwiches and pancakes on the menu, but anything easy and even snack-like went over well.

Of course, any trip with young children can have you wondering about…elimination. I was thankful that my son was successful at using the composting toilet and thrilled at any chance to pee on a tree. A friend recalled that her younger nieces didn’t go for the concept of using the restroom outside, so her brother picked up a bucket from Home Depot and cut a hole in it, which his girls sat on to do their business. Another mom suggested pitching your tent next to the restrooms in case you needed to visit the facilities in the middle of the night. I guess this is all to say that you’ll need to decide what will work for your children.

A friend included this in her tips and of course s’mores was a much-hyped part of our trip. Because of the drought and burn ban, we brought along a propane stove and roasted our marshmallows (quickly) over the flame. Granted, it was not the idyllic picture of a campfire, but it did the trick.

A friend who has been camping when her son was under three mentioned she drew a large circle around the campfire in the dirt that her son could not enter to help keep him safe. I hope on future trips we’ll get to get a fire going and make some recipes in the books my mom’s friend lent to us, Cooking on a Stick and Cooking in a Can.

After a weekend, I’m certainly no expert, but I do feel like this was the start to an annual tradition. If you feel inspired to try it, Heidi sent me information about a class coming up at the REI in Round Rock on Family Camping. 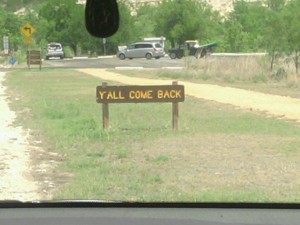 I’m sure there are lots of experts among you, so spill it: What have you learned camping with kids? What would be on your list of dos and don’ts?

9 Comments on The joys of family camping