When my son August died unexpectedly at birth, people said, “God needed another little angel in heaven.” Which, since I am not religious, did not comfort me. They said, “Everything happens for a reason.” Which made no sense, because what could possibly be the reason for an innocent baby to die? They said, “You’re so strong. If anyone can get through this, it’s you.”

That one hurt me the most. I thought, Are you kidding me? I did not feel strong. I felt broken, chopped down at the knees. For months postpartum, my body and my spirit felt loose, chaotic and raw, as if I had been stabbed, over and over. As if August had been ripped away from me. Strong? I felt torn apart. Irreparably and irrevocably shattered. 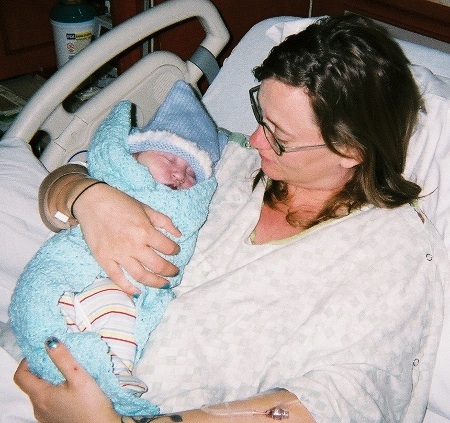 Besides, I wondered, what was the real message? Did other people get to keep their babies because they were just too weak to endure what my husband and I were going through? Was this one of those “whatever doesn’t kill you makes you stronger” experiences—was there some lesson I was supposed to learn from our tragedy? If so, wasn’t there a way I could have learned it that wasn’t so devastating?

Twenty months later, our daughter Pearl was born at home, late at night, in a mad, bright, dizzying rush of sound and energy. Her birth was a painful and exhilarating experience, and I basked in its miraculous glow: We did it! We brought a healthy, living child into the world. Pearl was here, safe and sound.

Thirty seconds after she was born, I looked into her face and exclaimed, “She has Down syndrome!” Our midwife said, “No, she’s just a little swollen.” But a week later, our pediatrician gave us the official diagnosis—Trisomy 21—confirming what we already knew.

At first, I wallowed in devastation. How could this have happened? How could we have one child who had died and another who had a chromosomal abnormality? It felt like losing another child all over again, and in a sense, I had: I believed I had lost the child I’d expected, the baby I had hoped for so fervently.

When our friends and family heard the news, they said, “Pearl has found the perfect family. If anyone can do this, you two can. It was meant to be.”

Again, I thought, Are you kidding me? You see, I heard this in a grim, duty-bound sort of way—as in, the road ahead would be tough, but we would do a good job caring for Pearl because we had to. Because my husband, a Special Ed teacher, already knows American Sign Language. Because we’re blessed with lots of love and support from our family and friends. Because we have access to resources that can help Pearl become who she is meant to be. Because we are the kind of people who will do the best we can, no matter the obstacles.

All of the above are facts, and I can’t argue with any of them; we’re undoubtedly in a better position than many to care for a child with special needs. But does that mean we were meant to do so? The concept smacked of bad karma, of being chained to a predestination that made my soul shudder.

Besides, since August’s death, I hadn’t been much for thinking in terms of “meant to be.” Our baby died and my entire worldview turned inside out. His death seemed to confirm one of two things: Either we were being punished by the universe for some unknown crime, or life was harsh, random, with no order or meaning at all. For a long time, I couldn’t determine which was true. I tried my best to believe life was random, despite my superstitious mind continually cycling back around to believing we were cosmically screwed. Discovering that Pearl had Down syndrome only added to my confusion—at first.

But now, months into our life with her, my worldview has changed again. I do think Pearl was meant to be ours. I think we fumbled and blundered toward her blindly as she claimed us with a true and certain aim. She’s the daughter we called into being amidst heartbreak and hope. We are the family she decided, with great purpose, to join. 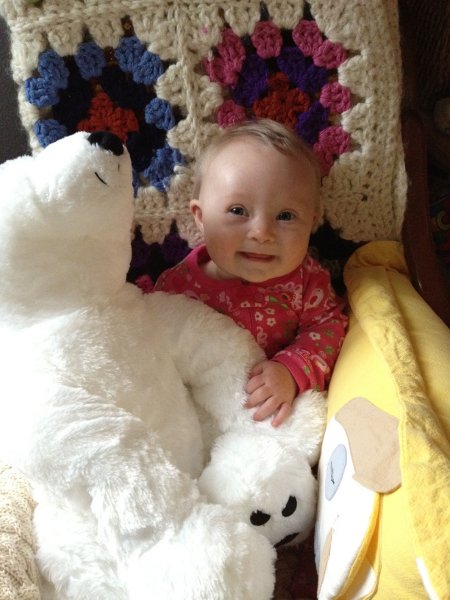 And I am inexpressibly glad she’s here. At first I thought of her having Down syndrome as a bad thing, and as something separate from Pearl, herself. Now she and her extra twenty-first chromosome are one and the same. Down syndrome no longer seems like something negative to me, any more than her being a girl or having two arms and two legs: It is part of who she is, and she is so much more miraculous than I can adequately express in words.

When a child dies—a real, flesh-and-blood child like August, not a fantasy, hoped-for child like the one I envisioned when I became pregnant again—there is nothing anyone can say to make it better, except, perhaps, “I am so sorry.” But here is what I wish someone had said to me during those first three weeks of Pearl’s life when I was once again so very, very sad:

You are going to fall utterly, madly, obsessively in love with this child. Not in several months or years, but in a matter of days.

This baby girl is going to delight you down to your toes. She will bring you more joy than you thought possible. She has already begun doing so.

This little one is going to make the pain of losing your son all the keener, because she will show you exactly how much you lost when you lost him.

I wish someone had said these things to me back when I was very, very sad. But if they had, I wouldn’t have believed them. These were things I had to learn on my own. And now I send out enormous gratitude to the universe, and to Pearl, for the fact that figuring them out for myself hardly took long at all. And I send out the hugest love to August. After losing a child, something like Down syndrome just doesn’t seem like that big of a deal.

Local and online resources:
• Down Syndrome Association of Central Texas
• My Healing Place — Grief support for people of all ages
• Pregnancy and Infant Loss Group at Round Rock Medical Center — Call (512) 341-6493
• Faces of Loss — Putting a face on miscarriage, stillbirth and infant loss (mothers’ stories told in their own words)

Catherine Avril Morris is a writer, teacher, self-appointed custodian of the English language, wife, and mother of two beloved children. She lives in Austin, Texas, with her husband and daughter. Her firstborn child, August John, died at birth on January 12, 2010, the same day the catastrophic earthquake hit Haiti. Visit Catherine at her Web site or her blog about losing August.

17 Comments on The Things They Said