I know what you’re thinking: Fish Stew? Yuck! But it’s so good. Really. Trust me! Well, I guess you have to like fish and coconut and yumminess. Then again, if you don’t like any of those ingredients, you probably won’t like it. 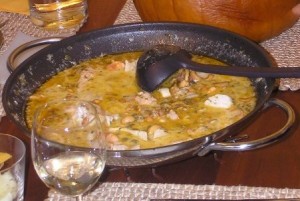 Last year, while visiting Germany, we were invited to have dinner at a friend’s house. His wife is from Brazil and she made us a delicious fish stew that she served over rice. I immediately asked for the recipe while making mental notes of every ingredient that she listed off. She said it was a simple thing to make, not incredibly time consuming. I wouldn’t have guessed it’s simplicity for its taste.

A couple of months went by and I began to crave this stew. But, with no written recipe (yes, I thought I’d remember it all!), I Googled it and found this recipe for Moqueca de Peixe. There were a few ingredients that our friend served in her stew that were not in this recipe: cashews, ginger and shrimp. The cashews were probably my favorite since I like food to have a little crunch to it. I used the above recipe as my base and then added the other three ingredients (about a half cup of cashews, one tablespoon of ginger and a pound of shrimp). I’ve used cod, mahi mahi and salmon as the fish and they all turned out fine. The only ingredient I didn’t have on hand is the palm oil- I just used olive oil as a replacement. I looked for it at Sprouts and HEB but had no luck. I figure maybe Central Market or Whole Foods may have it?

I served this for dinner to a group of friends one night and everyone loved it, except for two of the men who are true meat and potato guys. If you feel a bit adventurous, enough to try something referred to as fish stew, try this one and let me know what you think. 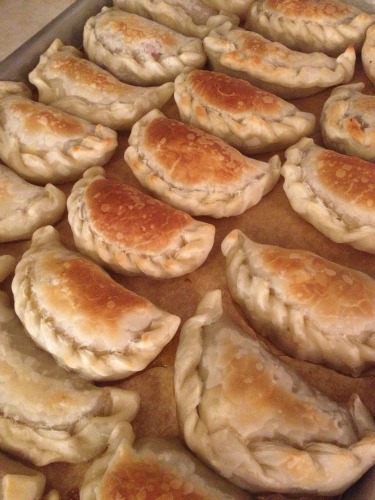