I found an interesting recipe in a really wonderful book, “The Occassional Vegetarian” by Karen Lee. It’s a Chickpea and Celery Salad, which is an unexpected combination, but works surprisingly well.

It’s cool, crunchy and refreshing, plus it gives you protien and vegetables. I can easily make a meal out of it and some watermelon on a hot (hot, hot, hot) summer night. My 6-year-old daughter likes it, which is super, but she keeps arguing with me that she likes chickpeas but not garbanzo beans, even after I pointed out in a food reference book that they are, indeed, the same thing. (Apparently, pushing Mom’s buttons when she’s frazzled by the heat is fun!)

This recipe is easy to make if you don’t mind a little chopping. Because it’s so fresh, and relatively inexpensive, I opted for all organic ingredients, including the canned chickpeas. It think it’s especially important for the celery, not only because you use the leaves, but also because celery is #2 on Environmental Working Group’s Dirty Dozen foods list.

Two random notes about this recipe: I think it’s cool because, for such a simple list of ingredients, you get a melding of flavors that becomes something different than the sum of its parts — almost a savory, tangy, peanut butter flavor after a few hours. Also, I messed with the original recipe amounts a bit to use 2 cans of chickpeas (the original called for 2 cups), just to make it easier (and because I wanted more!). Be sure to let it sit for an hour or so before serving, and do a final tasting as you may want to tweak the salt or vinegar. I hope you like it as much as we do! 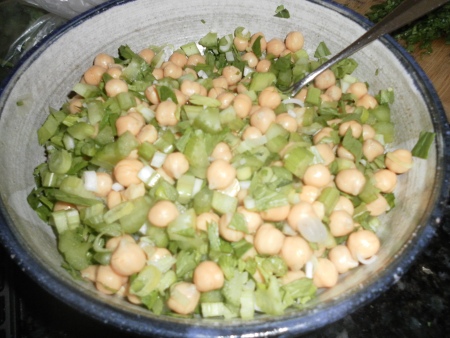