Whether you call it “Lemon Ice Box Pie” or “Lemon Meringue Pie”, this is a recipe you can find all over the Internet. It probably originally came from the back of a can of sweetened condensed milk sometime in the 1940s. However, although it’s not unique, it’s an heirloom in my family. We call it “Daddy’s Pie” because I’ve been making it for my dad since I was 11. Before that, my mother made it for him; before that, HIS mother made it for him.

I make it twice a year: for his birthday in December and for Father’s Day in June. In both instances, I make two pies. He graciously shares one with the rest of us, then hoards the other to have with his coffee in the morning or with a little milk in the evening for the rest of the week. That’s okay with me because it’s really, really sweet for my taste. But, if you’ve never tried one, or if the Dad in your life has a sweet tooth, you ought to give it a shot.

One note of caution: This is an old-fashioned pie with plenty of uncooked egg in it. Yes, the lemon in the filling “cooks” the yolks and the meringue is baked for a short while, but if you are pregnant or nursing or have any immune problems, you’ll want to use pasteurized eggs. Same goes for the elderly and children younger than 4.

Put graham cracker crumbs into a 9-inch pie pan. Drizzle melted butter over them. Use your hands to mix until all the crumbs are moistened, then start pressing from the middle and up the sides to cover the pan, making a crust. Set aside

Using a mixer and a clean, metal bowl, beat egg whites until soft peaks form. Gradually add sugar and beat until stiff peaks form. Spread meringue over pie, making sure to spread it all the way to the crust on all edges. Form peaks with a spoon or spatula. Bake for just a few minutes, checking often for browned peaks. When lightly browned, remove from oven and let cool 10 minutes on a rack. Then move to fridge and chill for at least one hour before serving, preferably two or more.

Note: If you try to make meringue on a particularly humid or rainy day, you’re going to be disappointed. I wouldn’t even attempt it on a rainy day, but if you want to try it and the day is humid, add 1/4 teaspoon of cream of tartar to the egg whites to help them set up. 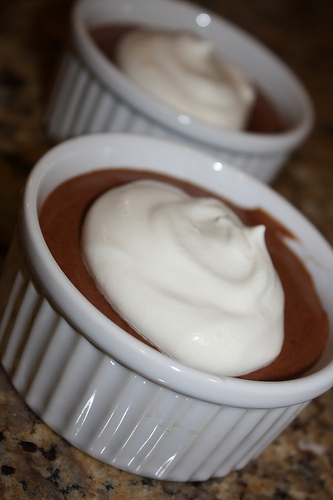