The amount and variety of food being offered at ACL 2010 is astounding. Check out the list of restaurants and menus! I can totally see spending three days satisfying two of my senses : hearing and taste.  To satisfy my food cravings, my first stop might be the Juicebox for a Cherry Limeade.  Next, I think I might mosey by the Aquarelle stand to get some Peppered Fries to go with my Cherry Limeade.  Once I had jammed my way through a couple shows and worked up another big appetite, I think I’d head over to the Lonesome Dove Western Bistro stand to check out the Truffled Mac & Cheese.  I know I’d round out my culinary tour with a final stop at the Kerbey Lane stand to argue with myself about whether I want the Tomato Pie or the Chips and Queso.  And that’s just my food tour plan for the first day!

Livemom got a chance to talk with a few of the restaurateurs providing vittles at ACL to find out more about their participation in this great event.

Juicebox is the new kid on the block – an upcoming joint venture between Matt Shook of the Daily Juice and David Ansel of The Soup Peddler.  While the Juicebox is not officially open yet, there will be a Juicebox stand at ACL 2010 to make sure you have something fresh and delicious with which to quench your thirst.  Stop by and delight in a cool, refreshing fresca, a Cherry Limeade, or a Sambazon Acai Smoothie. You also can get the best rehydration ever with a nice, cool glass of pure coconut water.

ACL 2010 will be Kerbey Lane’s first time to participate in the food court inside ACL.  At ACL 2009, Kerbey Lane had a booth outside the festival.  As an Austin classic, Kerbey Lane will be concentrating on offering menu favorites for the locals who love them and the non-locals who are about to fall in love.  Kerbey Lane has graciously shared a recipe for their menu-favorite tomato pie! 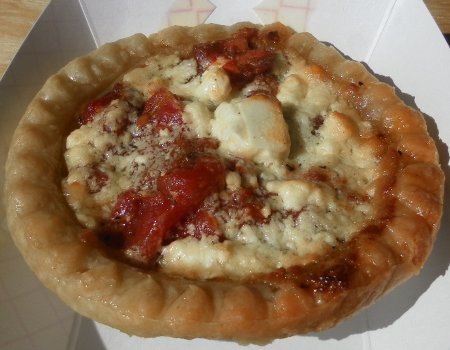 Directions
Preheat oven to 350 degrees F.
Place the tomatoes in a colander in the sink in 1 layer. Sprinkle with salt and allow to drain for 10 minutes.
Press the sliced tomatoes between layers of paper towels to remove some of the juice.
Cut the tomatoes into large pieces then mix together with the basil and onions in a large bowl.  Season with salt and pepper.
Combine the yogurt, feta and mayonnaise together in another bowl.  Put the tomato mixture into the pre-baked pie shell then spread the yogurt  mixture on top and bake for 30 minutes or until lightly browned.
Let cool for at least 15 minutes.  Cut into slices and serve warm with a sprinkling of Kalamata olives.
For a richer version of this recipe replace the non-fat Greek yogurt with mayonnaise.

Chef Tim Love is the official chef of ACL this year.  Love will be enhancing ACL’s food court by developing two pop-up locations of his celebrated Lonesome Dove Western Bistroand the Love Shack, while also catering private parties backstage during the three-day event. “This is my second year working with the amazing crew at Austin City Limits,” notes Love. “I’m looking forward to building on the success of last year, while adding a few new dishes and parties to the mix.  I’ll do everything I can to give the fans and musicians the type of food they want and need to have a great time.”

•       Remove excess fat from chicken
•       Cut chicken into large pieces with a cleaver
•       Place chicken and all other ingredients in a large stock pot and add enough cold water to cover ingredients
•       Bring to a slow boil
•       Decrease heat and simmer for at least 4 hours while skimming fat every half hour
•       Strain stock through a fine sieve and, again, skim for any fat or impurities that rise to the top
•       Store in refrigerator for 3 days or freeze for up to 2 weeks. 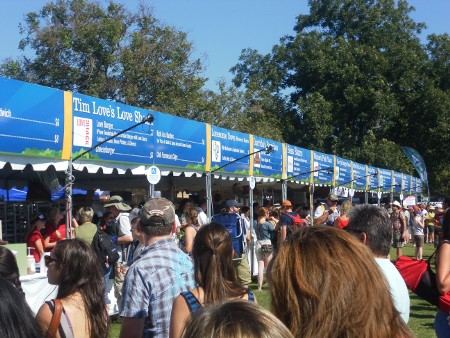 3 Comments on Thursday’s Dish : Eating Your Way Through ACL