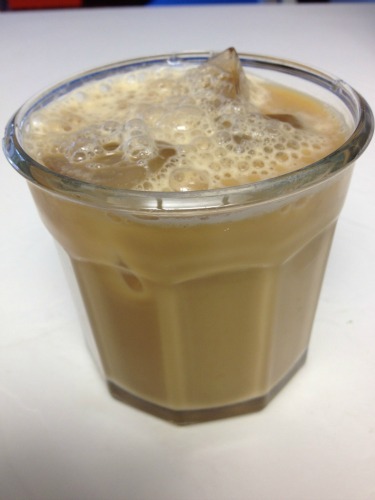 Admittedly, this does not look quite like what I had in Greece, but it does the trick.

For most of us in Central Texas, next week means a return to early bedtimes and the regular school routine. Perhaps those of you who were lucky enough to have children who sleep in have been slowly readjusting to getting up earlier. Me? My kid’s always been an early riser, but I’m lucky to be able to “sleep in” an extra hour during the summer while my husband gets him set up with his breakfast. So, that makes me a little rough around the edges the first week or two of school when I get up at what seems like the break of down and get everything ready and we make the 10 minute walk to school.

One thing which has helped me get through those afternoons when I’ve been up too late  writing and had to get up with my early bird is a mid-afternoon frappé, or Greek-style iced coffee.

Although of course I didn’t drink coffee as a child, I certainly have memories of visiting my grandparents in Greece during the summer, where at the time the custom was to take an afternoon nap (!) As a school-aged child who had long ago given up naps, this usually meant reading, but on occasion, the warm sea air and nice breeze did entice me to a quick slumber. When we all awoke,  the adults would each get a  frappé, and we would all have some sort of snack, which usually meant Fage yogurt with amazingly sweet fresh fruit (after all these years, I still remember those peaches!) When we weren’t at my grandparents’ summer house by the ocean, we might stop at a coffeeshop, where older men might be gathered, talking about politics or getting very animated, discussing something in Greek I couldn’t quite understand. There was no such thing as to go frappés, so we were forced to sit down and I usually enjoyed a fresh-squeezed glass of orange juice.

I also have memories of visiting my grandfather in his office in Athens, where he would order a frappé from the cafe on the ground floor and I would get a Coke. I still remember the drinks coming up on a huge tiered contraption that was carried up the stairs by a looped handle on top. On the rare occasions where I do have a moment to sit and sip my frappé, I remember the smells of the street vendors in Athens, roasting corn and selling bags of nuts and bangle-shaped sesame-seed encrusted bread sticks called koulourias.

Ingredients
1 tsp. Nescafe instant coffee*
1 tsp. sugar (if you don’t usually put sugar in your coffee, you might want less)
2 T half and half or skim milk (I haven’t tried soy or almond milk, but if that’s your thing, I say do it), optional
1 c. cold water

Method
There are two ways I make frappé. One is using Ikea’s $3 PRODUKT “milk frother” to mix your ingredients. If you go that route, you mix the coffee grounds, sugar, half and half/skim milk and ½ cup of water in the bottom of a medium to tall glass. Move the “frother” up and down through the liquid for 30 seconds to a minute to stir all the ingredients well. Then add in the rest of the water and the ice, stir and enjoy.

Another way I make frappé is to mix all of the ingredients except the ice into a shaker (I have a few that look like this). I have found that I can also do the same thing in one of those bicycle style water bottles (like this) I tend to get for free at events. After shaking the ingredients for a minute or two (this doubles as stress relief, although make sure the top is on securely!), I pour the coffee into a taller glass with ice.

On days I am really dragging, I can make a double, but it’s generally not advised if you want to get to bed at a decent hour.

*If you aren’t lucky enough to have relatives who will bring some back for you on trips, you can find it on Amazon — here is one listing — or something similar at international markets. When I run out, I have gotten some made in other countries at places like Sarah’s on Burnet or Phoenicia).

How do you ease back into the school routine?