I was recently the recipient of a 9-pound pork loin. Being that we’re a family of three, one of whom weighs 50 pounds soaking wet, I decided I needed several ways to eat that sucker, but I wanted to cook it all at once. Enter: brining and slow roasting.

I took an orange brine recipe from Alton Brown’s “I’m Just Here for the Food” and adapted it in an Asian direction (see below), but not so much that I couldn’t add other flavors to the pork. It is super easy to brine meat; the biggest challenge is finding something big enough to do it in when you’re talking about 9 pounds of pork. I used a large, rectangle Tupperware container, but you could use a roasting pan, a pickle bucket or even a large (clean!) plastic bag, so long as whatever you use fits in your refrigerator or a large ice chest with plenty of ice above, below and around the container (raw meat needs to be kept at 40 degrees or less!). You can also cut the meat up to fit whatever you have — or, hey, get less than 9 pounds! I brined the pork loin for 24 hours, but you could do it for more or less. Here it is in my electric roasting pan, drained of brine and ready to cook. 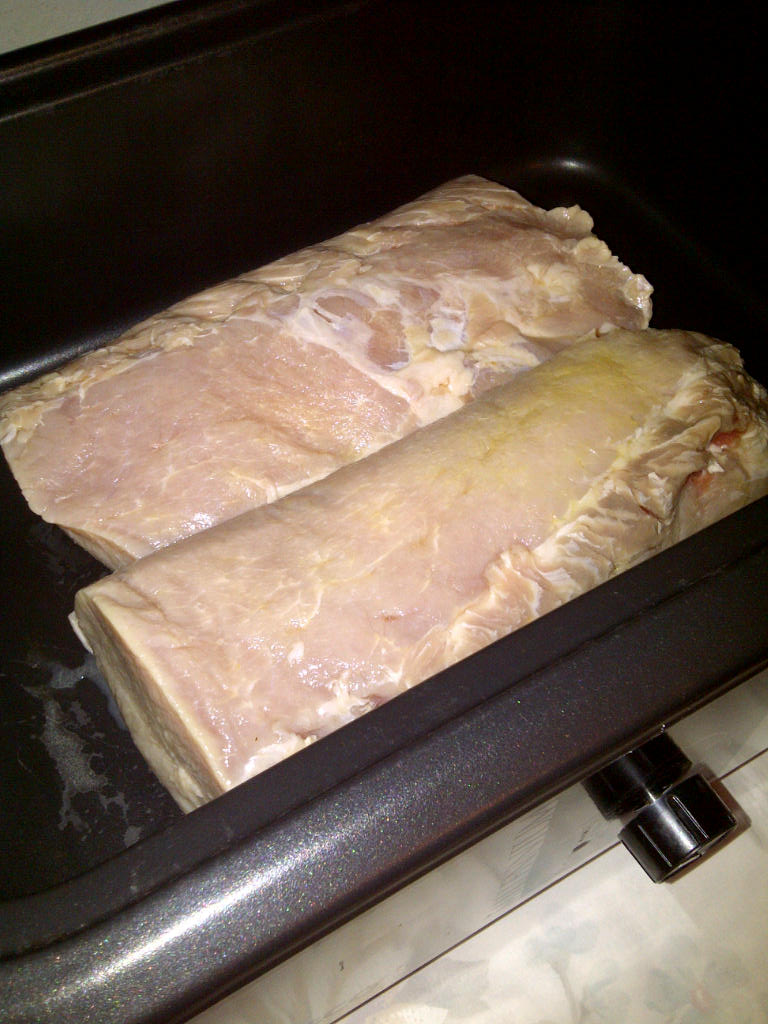 I cooked the pork for 8 hours at 250 degrees, but you could also go 225 for 12 if you wanted to do it overnight or start it very early in the morning. After it was cooked, I shredded the pork in its own juices in the roasting pan. That night, I tossed about 4 cups of meat with about 3/4 of a cup of Asian barbecue sauce. I used this one for inspiration, but backed off the salty ingredients (soy, hoisin AND fish sauce) because the brined pork was already salty, then added more orange juice to compensate. 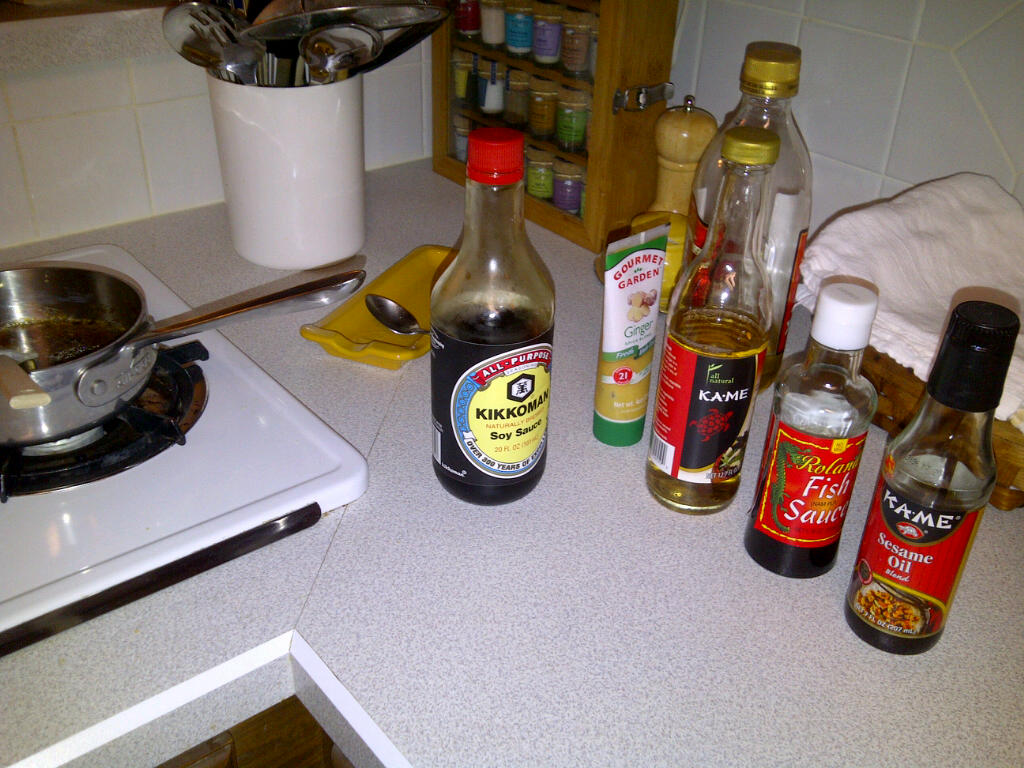 I served that on buns with an Asian-style slaw (shredded cabbage and carrots with sliced sugar snap peas and scallions, tossed with some rice wine vinegar, sugar, soy sauce and sesame oil). We added sautéed greens and some sweet potato fries and had a yummy dinner, plus sent friends home with the rest of the sauced pork. (The friends, however, were not sauced, despite the wine you see pictured.) 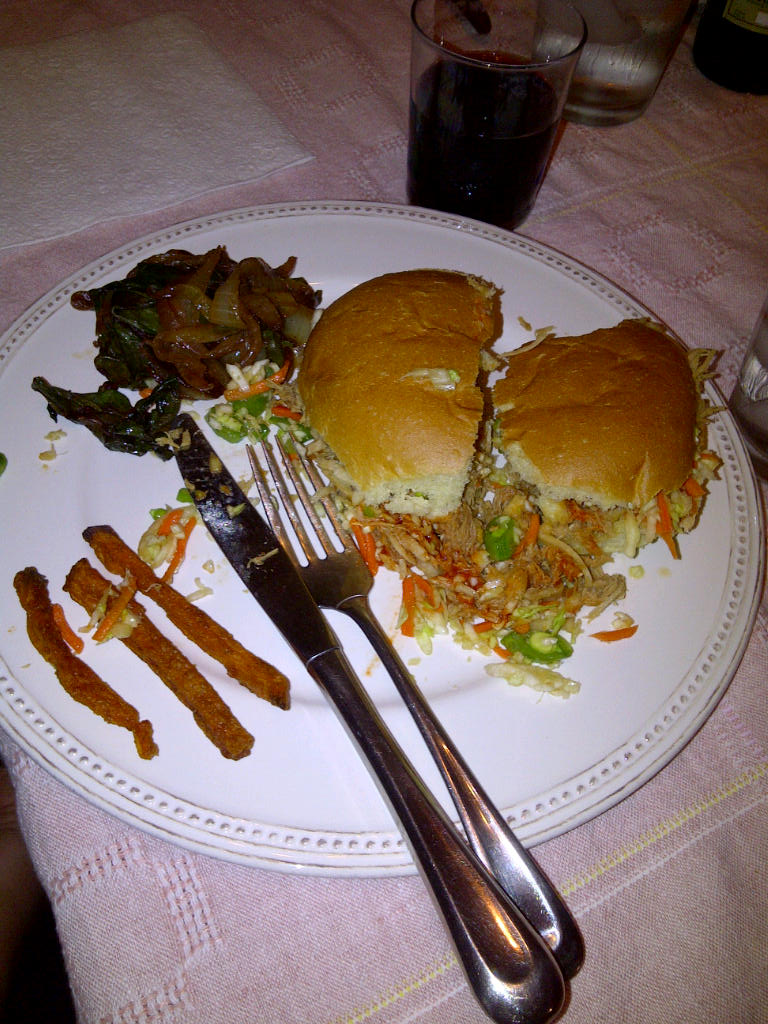 Now, how to use the rest of the meat? The next night, I tossed it with a prepared satay sauce and served it over a salad with rice noodles, which my daughter particularly liked. The following night, we took a break and didn’t eat any meat, but I did hand off a couple of cups to my mother-in-law! Finally, last night, I heated most of remaining meat and rolled it up in corn tortillas, doused the pan with store-bought green enchilada sauce, tossed some shredded cheese on top, and baked it in a 350-degree oven for 25 minutes. I served the enchiladas with sliced avocado and sour cream on top — they were eaten too quickly to take a picture of!

I now have about 1 cup of shredded meat left. Sigh. You know, the dog’s been really good lately …

Keeping the rest of the liquids in the fridge, add a cup each of the stock (or water) and orange juice to a small pan and bring to a boil; dissolve salt and sugar (or honey), then add peppercorns, bay leaves and ginger. Turn off heat. When the mixture is at room temperature, add a cup of ice cubes to cool further, then mix with the rest of the liquids and pour over meat. Let brine overnight or up to 48 hours.