Never look a gift horse in the mouth. But what about a gift pig?

For Christmas, a relative (who shall remain unnamed) gave us a full-size Virginia ham. That’s 18 pounds of pigginess, all cured in salt (but not cooked) and wrapped up in a cloth bag. And for the uninitiated, which we were, you need to know that it takes quite a bit of preparation before it becomes edible (and the jury’s still out on that).

Now, this relative did a nice thing. S/He knows my husband and I are intrepid food people, knows we’ve dealt with large quantities of meat before (for instance, barbecues for 60+ folks), and knows we like pork just fine. (In his/her defense, I don’t think s/he knew anything about the labor disputes/conditions involving some Virginia ham companies, either.) So, here we were with 18 pounds of ham hanging in the garage (it was quite cold that week). Time to get to work!

My husband took the lead (bless him). He followed the instructions on the cloth bag it came in: Soak for 48 hours in water, then slow cook. After doing this, he trimmed it (which took it down to about 14 pounds) and tasted it. It was still INCREDIBLY salty. So, we used some of it in greens and beans for New Year’s Day, then put the rest in the fridge. And there it stayed, while my husband and I slowly began the proliferation that would lead to … Ham-ageddon! “Honey, do you want to resoak the ham?” “I don’t know if that would do any good, dear.” “Well, we need to try.” “Get me a bunch of pineapple. I’ll make a glaze.” <pineapple procured> “Honey, shouldn’t we make that ham tonight?” “I don’t know, it’s so salty.” <internet research done> “Let’s try soaking it in apple juice. Someone online says that’ll remove some of the salt.” “Can you soak it after it’s been cooked?” “I don’t know.”

You can see how this went, back and forth, neither of us wanting to take the responsibility for what we started calling “ham management.” Finally (and because it’s been salt-cured, cooked and refrigerated, we had plenty of time to make this decision), we soaked it for 24 hours in apple juice (in a bus tub that barely fit in the fridge), then cooked it in a pineapple-bourbon glaze. It was … okay. Salty but edible. We fed some to a friend. That left about 12.5 pounds. Sigh.

“Honey, we need to break that ham down. I need the fridge space back.” “Okay, but is there room in the freezer for all that?” “Well, we need to give some away.” I gave some to my dad. He’ll use it in greens and beans, also. That left about 11.5 pounds. …

Tired of trying to pawn it off on my husband with the weak excuse that it was his unnamed relative who gave us the ham, I attacked the problem myself, quite literally. The pictures below (vegetarians, beware) show the progress from almost-whole ham to reasonably sized baggies and a hambone for future use … when we can eat ham again.

Here it is with the chunks taken out for greens/beans-making, one dinner, and some for my dad. (Note: It is, indeed, bigger than my restaurant-size box of food wrap.) 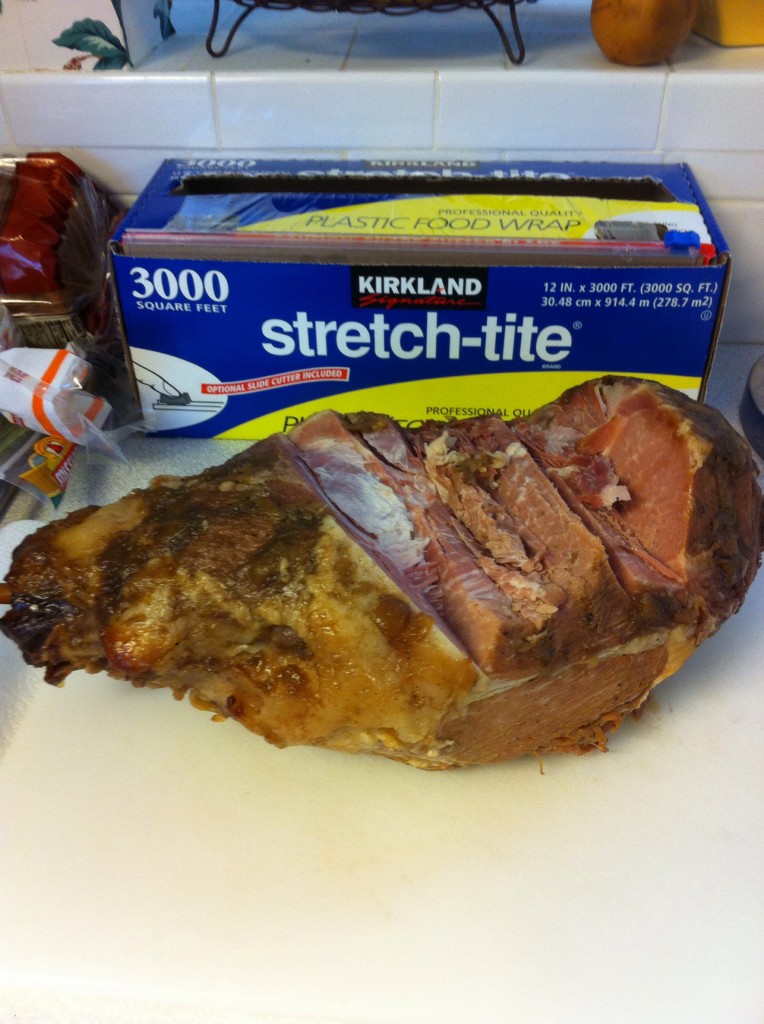 The process has begun. 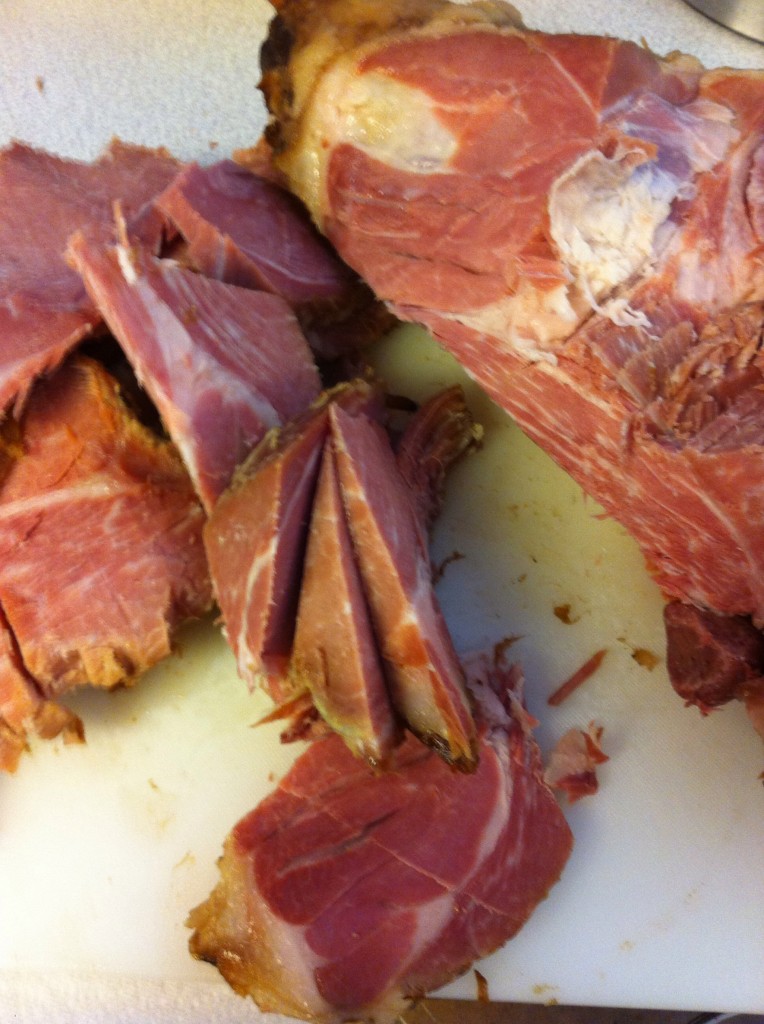 My dog: “Please, please drop something!” 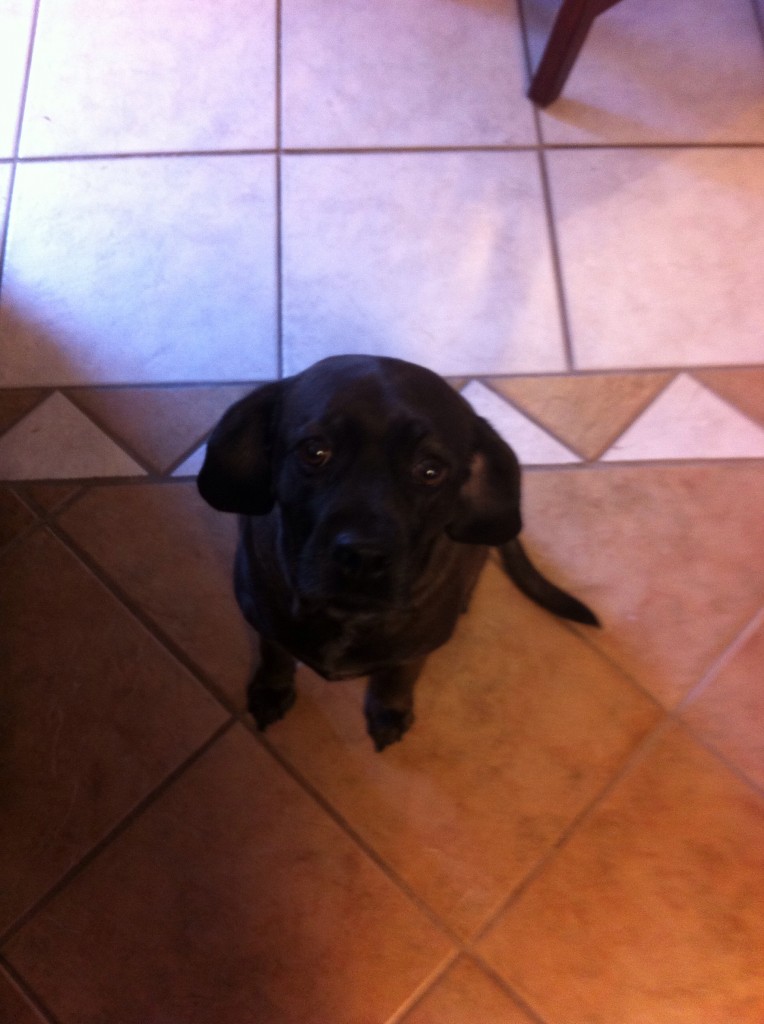 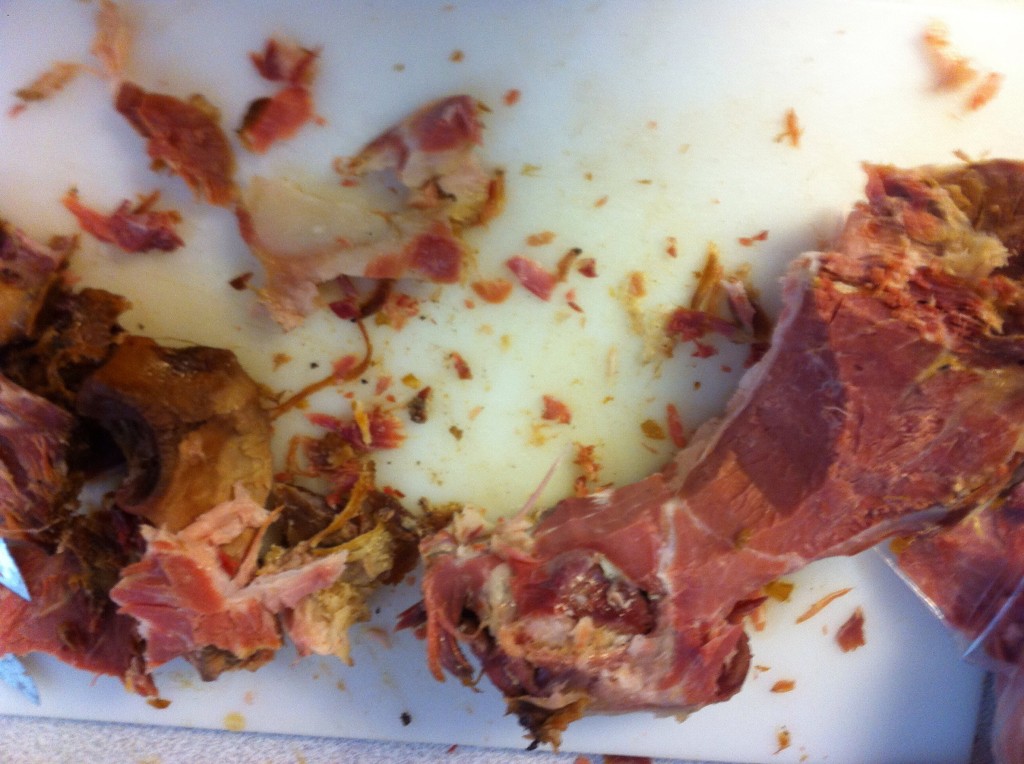 Seven bags of ham plus a hambone, which weighs about 4 pounds. Unnamed relative is first on my ham delivery list. 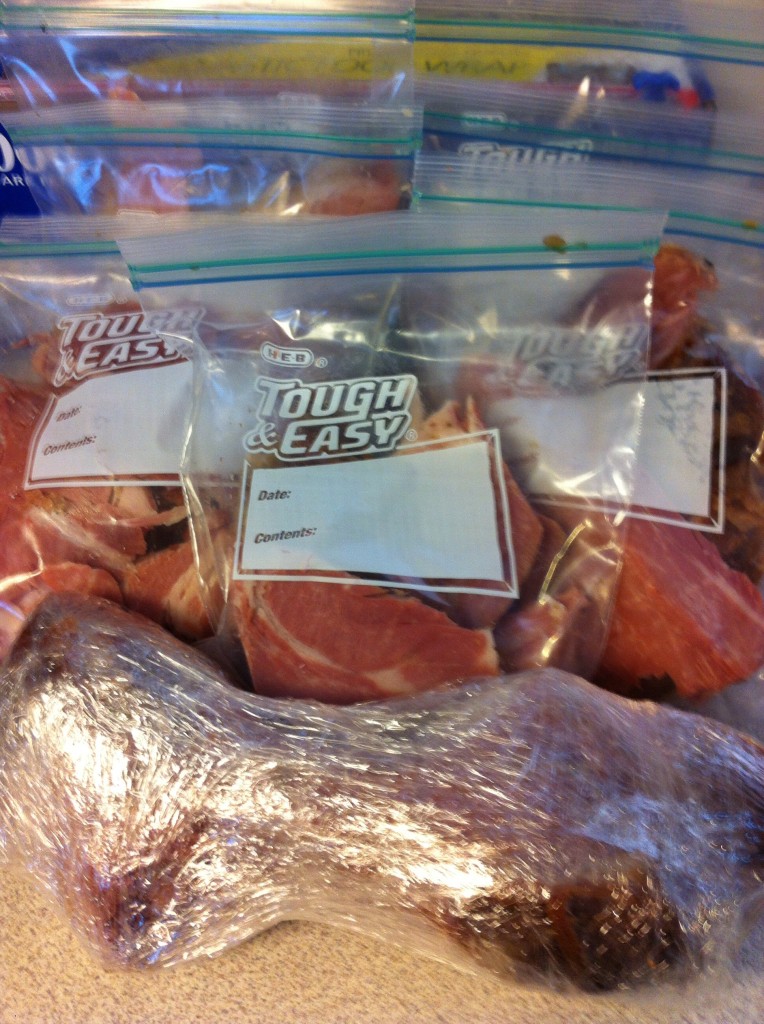 There you have it. We lived through Ham-ageddon.

Have you done this? Do you have any tips? Is Virginia ham an acquired taste? I’m southern by birth, but I’m afraid I missed the salty ham-loving gene. Also, please share recipes that use ham. After delivering a bag to unnamed relative, I’ll still have about 5 pounds, plus the bone. (Help!)