For this week’s post, I thought it would be fitting to make a dish for St. Patrick’s Day, a week from today. Irish soda bread? Lamb stew? Shepherd’s pie? Then, I started to see packaged corned beef at the grocery store, all weird and pink. Turns out it’s pink because potassium nitrate (also called saltpeter) is added to it. Potassium nitrate is also added to fireworks and rocket propellant, and can be used for stump removal … I decided to look for a better way to make corned beef.

There are tons of recipes available online. I ended up mashing together several recipes I found online and one I found in a magazine (Mary Jane’s Farm — a fun magazine about living an “organic lifestyle”). What I ended up with was not exactly corned beef, but was a delicious Irish pot roast that would be perfect for a St. Paddy’s Day feast. There are two things I’d do differently, though, so I’ll add those to the recipe but explain them here.

I used Brussels sprouts instead of cabbage, but I think that lent too much of a bitter taste to the rest of the food. Stick with cabbage for this recipe. (If you also prefer Brussels sprouts to cabbage, may I suggest you serve them sauteed, like this.) 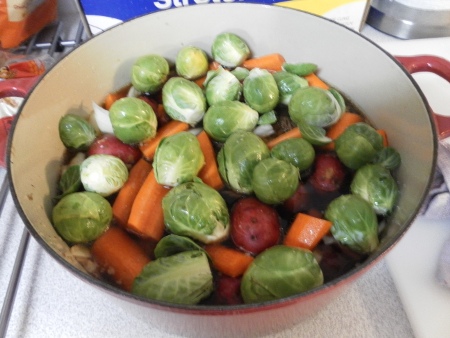 A few of the recipes called for brining the meat, sometimes up to 10 days (I don’t have time for that, Alton Brown). However, in the future, I think I would like to soak the brisket overnight in the liquid I’m cooking it in, just to really meld the flavors. Try that if you have time — even a few hours might make a difference. That said, even without brining, this meal takes several hours in the crockpot before transferring to the oven for an hour, so start early in the day.

With all that said, on to the recipe!

1 rutabaga, peeled and chopped into chunks

In a large bowl, combine water, beer, salt and sugar. Stir until salt and sugar have dissolved. Add all the spices. If brining overnight, add meat to bowl, cover and put in fridge. If making the day you’ll serve it, put the meat in a crockpot and pour the liquid and spices over it. Set crockpot to low and cook for 6 hours (time it to end about an hour and a half before you want to serve dinner).

Preheat oven to 425 degrees. Transfer meat from crockpot to large Dutch oven (or another large ovenproof pot with a lid). (During this step, I used a spoon to scrape the excess fat from the brisket because it was so easy to remove. If you do this, be careful not to tear up the brisket, which will be pretty soft.) Strain cooking liquid and reserve.

Ladle enough cooking liquid into the Dutch oven to come 3/4 up the sides of the beef. Add onions (push them down into liquid) and potatoes (also mostly in the liquid), then carrots. Sprinkle a little salt over that layer. (You can now discard the rest of the cooking liquid.)

Place covered pan in the oven and cook for 45 minutes to 1 hour (you want the potatoes to be cooked but not mush — test them with a fork after 45 minutes). Serve with crusty sourdough bread, good Irish butter and the bottles of Guinness you didn’t put in the pot, if you like! Serves at least 6, depending on the size of the brisket.