Meet the Little Kid (LK). She’s three and a half and her favorite food groups are sugar and grilled cheese (or, as she puts it, “girls cheese”) sandwiches. One recent weeknight, LK’s big brother, Big Kid, had tee-ball practice, so she and I were at loose ends. I didn’t feel like cooking, so I took her to the newly opened North Austin Trailer Yard (NATY) for dinner. I figured that the brightly colored animal statuary plus the option of a “girls cheese” sandwich would make for a fun girls’ night out. 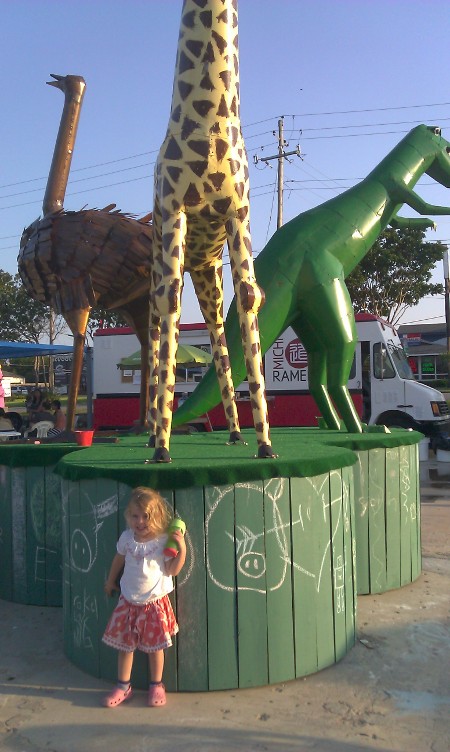 Here in Austin, food trucks have been a pretty big deal for a while. The most recent curve in the food-truck trend is trailer parks, which are basically outdoor food courts featuring a variety of trucks offering a broad spectrum of culinary genres. This makes for a congenial lunch or dinner out for a group with a diversity of palates, but a lot of trailer parks don’t have super kid-friendly food (or at least, not food that my kids find appealing, but that’s a story for another time). But the NATY is home to Snarky’s MooBawkOink, which offers a bunch of different sandwich styles; Michi Ramen, serving Japanese noodle bowls; Big Fat Greek Gyros, which is a pretty self-explanatory name; The Dog House, with hot dogs and shaved ice; Genuine Joe On the Go, featuring coffee and smoothies; and Krak2, with four varieties of gourmet doughnuts. In short: all of my family’s favorite food groups are represented here. All that’s missing is ice cream. 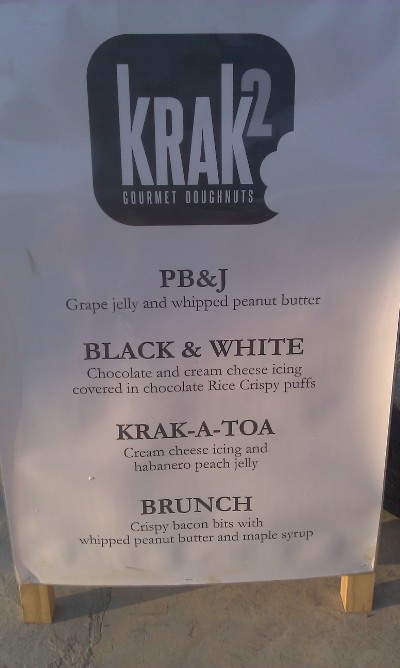 LK and I went to the NATY on a Tuesday night and saw two rather large parties enjoying their dinners in front of Big Fat Greek Gyros and under the shaded picnic area between Snarky’s and Michi Ramen. Michi was sold out and the Dog House was closed, so if you wanted dinner, your choices were sandwiches or gyros. (Check the NATY website for each trailer’s hours of operation: http://www.thenaty.com/#) LK ordered a kid’s grilled cheese and I, starving after an intense exercise class, opted for the banh mi with pork. I opted for the combo, which included a side (I got coleslaw) and a drink (bottled water). With all of this and LK’s bag of chips, the total was $11.50.

The sandwiches were ready in less than five minutes; both sandwiches were on soft-soft baguettes, LK’s oozing with a mellow white cheese, and mine stuffed with pulled pork topped with an orangey “SnarkAsian” sauce. While it wasn’t an authentic banh mi, the sandwich was delicious and disappeared within minutes. LK, ultimately, was more interested in her chips than her sandwich, but I reckon that if I’d given it to her at home, she would have eaten most of it (if the planets were aligned just right and no one looked her directly in the eyes and she had the right color plate). 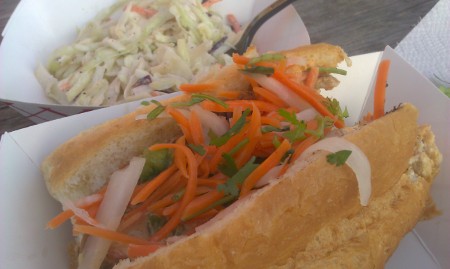 After we (I) finished eating, LK and I decided to explore the park for a few minutes before heading home. We took some pictures and she played in the play yard (definitely a feature unique to the NATY), which is scattered with toddler-friendly toys and a few chairs for parents tapped to supervise. Older kids would probably find the play yard boring, but they can go to town with some chalk and make their marks on the base of the animal-sculpture centerpiece. 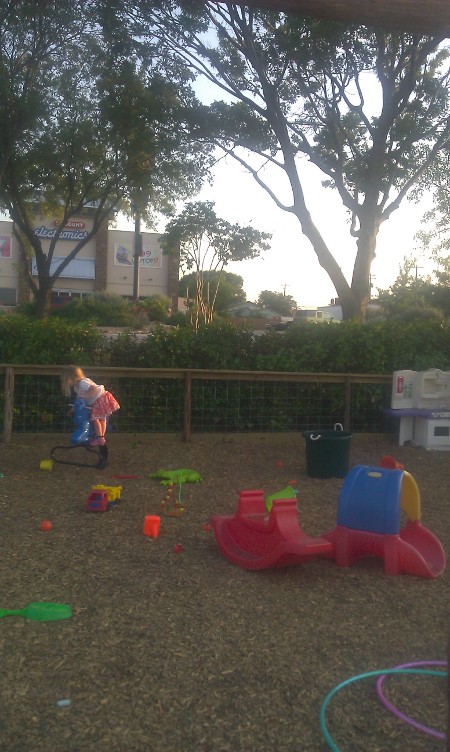 I look forward to returning to NATY to try some ramen, a gyro and baklava, and some shaved ice, although I wonder how comfortable it will be on all of that concrete when it is 150 degrees outside. Maybe the presence of an ice cream trailer would mitigate that concern…

Melanie Haupt is a freelance writer, sometimes-blogger, and the mother of two young children. She recently defended her dissertation on women’s food writing at  UT-Austin. You can read more of her work at austinchronicle.com and boxingoctopus.wordpress.com.