In celebration of Oktoberfest, LiveMom visited Chef Keem’s Bavarian Bistro, a trailer eatery in downtown Austin (at Third and Congress). We ordered jaeger schnitzel, griddle potatoes (bratkartoffel), sauerkraut and red cabbage (rotkraut). The schnitzel, a thin piece of pork breaded and fried until perfectly golden, was served on a toasted bun with jaeger sauce (a brown sauce with mushrooms), plus spicy brown mustard and curry ketchup. Yum! 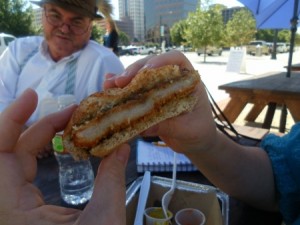 Achim Thiemermann was born in Munich in 1949. In the ’70s, he had a short career in disco, a shorter career in acting, then in 1981 moved to Texas when he married an American. He began cooking in earnest when he moved to Austin and became known as “Chef Keem”. He’s a wonderful pastry chef and candy maker, and had created his own brand of flavored agave nectar. Last year, he decided it was time to get back to his roots and bring authentic Bavarian food to Austin. The trailer opened in July and has been getting great reviews on Yelp. 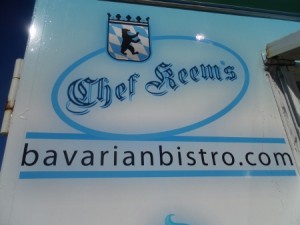 Chef Keem is a real character, which you can see from his online presence. His Bavarian Bistro website declaims with authority on German food, whether you want to know the difference between a knockwurst and a bratwurst or a wiener schnitzel and a jaeger schnitzel. But if you tool around on the site, you’ll find links that may take you to recipes and videos of cooking demos, the chef dancing or wearing bunny slippers, or even dressed as the infamous Miss Kimmie (yikes!). 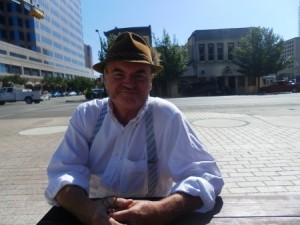 The good chef shared a recipe with us for Obatzda, a Bavarian cheese spread. Be sure and visit him at his trailer, and tell him LiveMom sent you! And look below the recipe for a listing of Central Texas Oktoberfests. Prosit!

Salt and pepper, to taste

Oktoberfest at The World-Famous German Restaurant, Walburg, every Friday and Saturday night in October, www.walburgrestaurant.com

Note: Fredericksburg’s Oktoberfest is over. It was the first weekend in October.