I’m taking the prolonged cold as an opportunity to feed my family as much soup as possible because I know that there will be at least four months out of the coming year during which soup will be unfathomable. Potato Leek Soup is so rich and filling, yet so simple to make. The only tricky part is making sure you’ve washed ALL the dirt from your leeks.

To do that, cut off the coarse green tops of your leeks (three large ones for this recipe) and halve the white and light green stalks (discard the darker green tops). Slice the stalks using 1/4-inch cuts, then put all slices in a colander and rinse well, moving them around with your hands. (Or swish them in a large bowl of water, letting the dirt fall to the bottom, and skim the clean leeks from the top; repeat if necessary.) 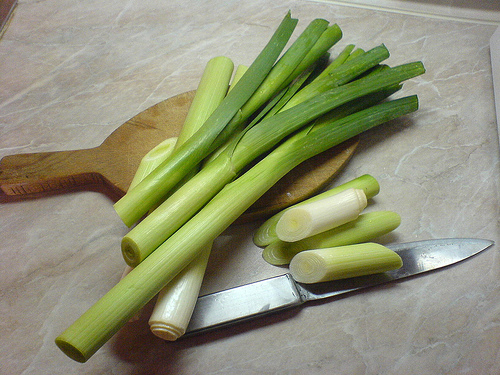 The recipe I’m sharing is one I adapted from a “Cooking Light” recipe (Nov. 2004). Below it, I’ve added some options that can make this simple soup even more delicious. Pick one, or come up with your own. I’d love to hear about your variations.

Note: The recipe calls for white pepper, but that’s just to keep the soup a creamy white color. If you only have black pepper, use that, or omit the pepper altogether.

In soup pot or Dutch oven, heat oil over medium-low heat, then add leeks. Stir once, then cover and cook 3 minutes. Add stock, potatoes, salt, pepper and thyme; bring to a boil. Reduce heat to low and simmer 15 minutes, or until potatoes are tender.

Either purée using an immersion blender or in batches in a regular blender. Serves 4.

Options:
1. Use 2 slices of bacon instead of olive oil. Chop them up and brown over medium-high heat before adding leeks.
2. Add roasted garlic. Cut the top off a head of garlic, put in a square of aluminum foil, drizzle olive oil over the top, crumple foil to mostly cover garlic (leaving room at the top for steam to escape), and roast in 400-degree oven for 45 minutes. Before soup is puréed, squeeze in garlic. Then heat over low to let flavors come together.
3. Only purée half the soup for a chunkier stew.
4. Stir in a 1/2 cup of cream or half-and-half after puréeing and heat over low (do not boil) before serving.
5. Over low heat, slowly sprinkle in a 1/2 cup grated Gruyere cheese, stirring to melt.
6. Top with a sprinkle of nutmeg or some croutons and chopped parsley.