For the past few years, I have either hosted or attended a soup swap in the fall or early winter (there was one year I missed because I was in the hospital having a baby, but my friends all brought extra soup to the swap I missed and brought it to me when I got home, which was a lovely gesture). I really love a good soup swap, not only because you get to stock your freezer for the cold(ish, if you’re in Austin) days and nights ahead, but you also get to exchange food with your friends and community members, which is never a bad thing.

The beauty of the soup swap is that it is a versatile event. You can make it a party or you can be all business. I once went to a swap that was held outside at a park; the children played on the playscape while the moms attended to the business of soup. When all of the soup had been exchanged, we all went home. Conversely, I have held soup swaps that are like little early-evening parties, complete with wine, a groaning buffet of nibbles, and fun little things like handmade door prizes for the first and last soups picked. The tone you set for your soup swap is contingent, of course, upon you and your invitees, but I personally believe that no one will want to come to your soup swaps if they aren’t a little bit fun!

The basics of a soup swap are these: choose a date sometime during the cold months for your event. Choose 10-12 people to invite, based on the theme of your soups to be swapped. This year, I chose to have a vegetarian/vegan soup swap because meatless soups are generally pretty uncontroversial, and many people I know are trying to reduce their meat intake. However, you will want to ask your attendees to please specify, either on the Facebook event page or Evite or perhaps even a Google doc, what kind of soup they are bringing so that you don’t wind up with a dozen variations on butternut squash or lentils. Attendees should make enough soup to fill 6-8 freezable (no glass!) quart-size containers for sharing. Truly thoughtful attendees will bring copies of their recipes with them to the swap. Containers should be clearly labeled with the type of soup, and any ingredients of note for attendees with allergies or dietary restrictions; for example, you’ll want to indicate if your soup has peanuts in it or whether it is gluten-free. 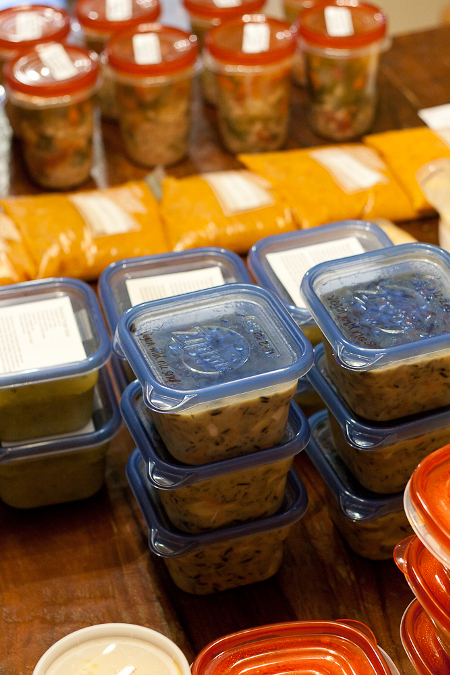 Make sure you have a large enough surface to accommodate everyone’s containers of soup on the day of the exchange. After everyone has arrived, set up their soups, and had a chance to mingle and nibble, assemble guests in the main swapping area and have everyone go around and introduce themselves and their soups, telling any interesting stories they might have about their soups (“I got this bantan recipe while doing an ethnographic study of nomads on the Mongolian steppes”; “My Sicilian grandmother brought this recipe for split pea soup over on the Mayflower”). After everyone has introduced his or her soup, everyone draws a number and the swapping begins, with the person who drew number 1 selecting his or her first soup, then number 2, number 3 and so on until everyone has selected a soup. Keep going in rounds until all the soup has been swapped. Depending on how many people you have and how chatty they are, this might take a while, so just remember that sharing food with your friends and neighbors is fun, and that to help one another stock each other’s freezers with warm, nourishing food for the long winter nights to come is a great way to make new and strengthen existing bonds.

*If this soup tastes too “vegan,” you can always add some chopped bacon or shredded chicken, and substitute chicken broth for the vegetable broth.

**This soup is rather thick, so you might want to add more broth at the end until it reaches your desired consistency.