In the quiet of this first week back to schedules and normalcy, I got the chance to try out my newest kitchen implement (a Christmas gift from my MIL): a pressure cooker. It was my first time. I grew up seeing my grandma and mom use them, but I had never done it on my own; in fact, I’d never been allowed to touch one.

The story is told in my family about the time my grandma was making black-eyed peas in it and BOOM! She found bits of peas in far-flung places for months afterwards. She went on using it after figuring out the problem, but I’ve always thought of that as a cautionary tale and stayed away. But, in trying to cook healthier foods for my family — and to do it quickly — I kept coming across recipes using pressure cooking to keep nutrients in while fully cooking foods rapidly. Who can argue with that?

I received a Presto 6-quart stainless steel pressure cooker, with a handy manual and recipes. When I saw a recipe for sweet potatoes, I knew what my first foray into the world of pressure cooking would be: a sweet potato soup I had the day after Thanksgiving at the Homestead Heritage Festival. It’s a creamy, filling soup with just a hint of heat thanks to pickled jalapeños. However, the original recipe calls for a HALF CUP of butter (TWO STICKS!!!), a CUP of half-and-half, and way more salt than I thought necessary, plus it uses two pans, a Crockpot and a blender — people, my dishwasher is broken and the new one isn’t coming until next week — so I did some serious tinkering with the recipe. What you have below is my adaptation with optional pressure cooking instructions (you can easily make it without one). 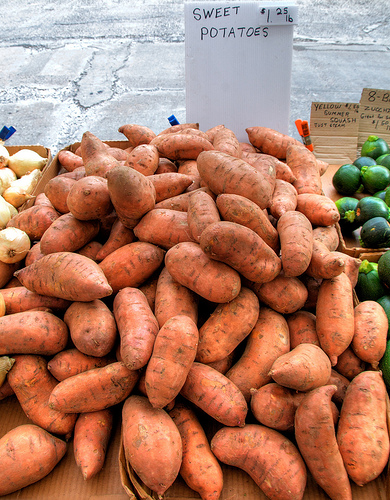 I did have one mishap with the pressure cooker. After I took it off the heat, but before I cooled it, thus reducing the pressure, I removed the regulator. (If you are familiar with pressure cooking, you just cringed.) An Old-Faithful-style geyser of steam shot out of the top, and I grabbed my daughter and took cover in the living room. Once it stopped, I continued with cooling the pressure cooker, noting the PICTURE in the manual that shows the regulator clearly ON while doing so, and thanked my lucky stars that I wasn’t scraping sweet potatoes off the ceiling. Needless to say, my daughter was immensely impressed with the whole process. And she liked the soup.

Peel sweet potatoes and cut into 1-inch rounds. Put in pot and cover with water (about 1 inch over top of sweet potatoes). Bring to a boil, then turn down to medium and cook until soft but not mushy (test with a fork), or cook in pressure cooker (see below).

While sweet potatoes are cooking, peel and chop onion and garlic. Melt butter over medium-low heat in the bottom of a Dutch oven or stock pot; add onion and garlic and sauté until translucent, stirring occasionally (if they begin to brown, turn the heat down). Add bacon and sauté 2 more minutes, then stir in spices.

Drain sweet potatoes and add to onion mixture. Mash up any big chunks, then add chicken broth and jalapeños. Bring slowly to a boil, stirring often – don’t let the bottom burn. Then turn the heat down to simmer. You can hold it here for a while if you’re not quite ready to serve, but once you add the half-and-half and milk, you don’t want to keep cooking it for a long time. (If you want a more homogenous soup, hit it with an immersion blender, but I like the texture.)

When ready to serve, stir in the half-and-half and milk, then let it heat on simmer for 5 more minutes. Sprinkle each bowl with chopped cilantro. Serves 6 as a main dish or 12 as a starter.

Pressure cooker instructions for sweet potatoes: Obviously, I’m no expert, but I followed my manual and suggest you follow yours, too. I had to slightly adapt the Presto recipe, which was for Maple Glazed Sweet Potatoes. I took my 5 pounds of peeled, cut up potatoes and put them in the pressure cooker, then poured 1 2/3 cup of water over them. I closed the cover “securely” and placed the regulator on the vent pipe, then heated the whole over high heat on the stovetop until the regulator began rocking. I set a timer for 5 minutes, then turned the heat down a little to keep the regulator rocking “gently”, and had to turn it down one more time before the 5 minutes was up.

Meanwhile, I got a larger pot ready to be the cooling receptacle by putting cool water in it about 1/3 of the way up the sides — you want the pressure cooker to sit in water but not overflow the other pot. When the timer went off, I turned off the heat. This is when I removed the regulator — DO NOT DO THAT. Keep it on there, and using hot pads, place the pressure cooker into the larger pot of cool water. Leave it alone for about 5 minutes, then check to see if the air vent/cover lock is down. If it is, you’re assured a relative amount of safety when opening the lid. No, really, it should be fine. Your sweet potatoes will be cooked just right to go into the recipe above. Good luck!