I bet you have a favorite dish made by your mother. Something comforting, maybe something you’d want when you’re feeling down or have a cold. Maybe you’ve even gotten the recipe from her, but it doesn’t taste right unless she makes it. I know I have one, but it’s kind of surprising because my mom’s from Alabama. It’s no down-home Southern favorite; it’s Tom Kha Gai, the Thai chicken soup in a fragrant coconut broth. (Here are some of the ingredients, ready to go.) 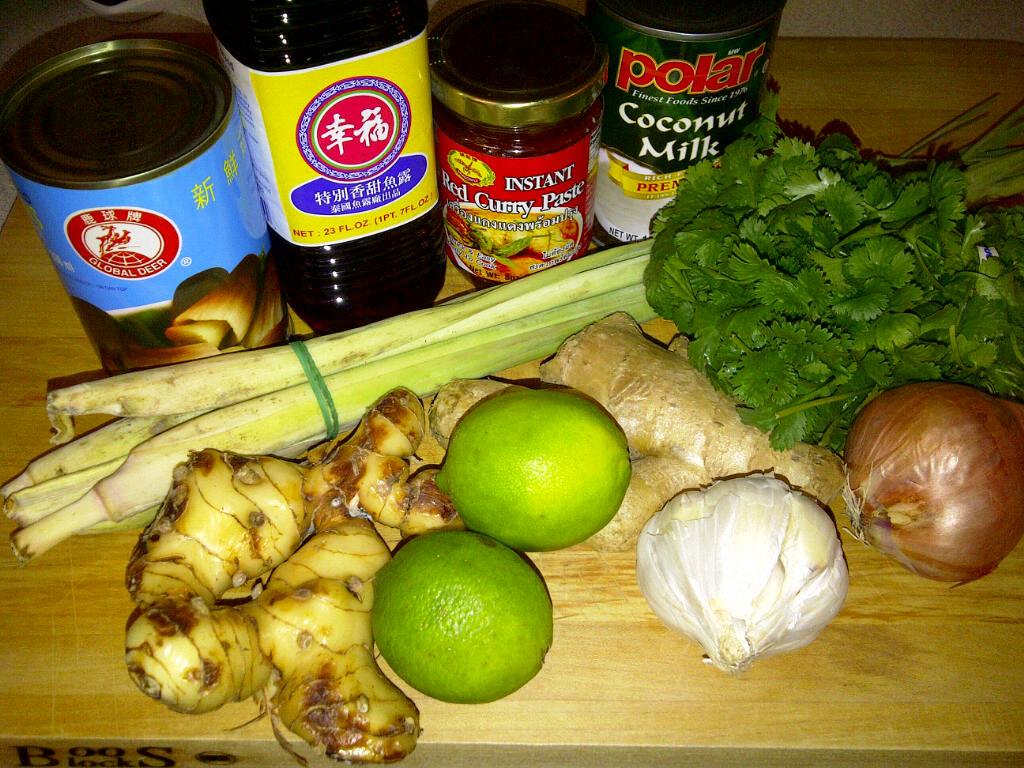 Mom originally got the recipe from one of Jeff Smith’s cookbooks. (Smith was otherwise known as the Frugal Gourmet. My family loved his cooking show, but were horrified by the allegations made against him later. He died in 2004, and most of his books are now out of print.) We’ve adapted it somewhat — for instance, we don’t add sugar, but you may want to try it without and stir in a half teaspoon at a time until it meets your tastes. We also don’t add jalapeño or black pepper, preferring the heat of red pepper flakes or Sriracha. He had incredibly fussy directions, which maybe were necessary back in the ’70s, when few people had been introduced to lemongrass and the like, but today can be simplified. If you’re unclear about something, the Internet is there to guide you. (Here’s a lovely woman showing exactly how to prepare lemongrass.*)

This is such a fragrant, delicious, filling soup. It seems like it would be difficult to make, but it’s actually quite simple once you’ve procured the ingredients. I was able to find everything I needed at MT Supermarket EXCEPT for the kaffir lime leaves. After checking a few other Asian markets, I called the Savory Spice Shop-North Austin, which had dried ones. If you can find fresh kaffir lime leaves at a good price, buy a bundle and freeze what you don’t use (wrapped tightly, of course). They’ll keep for a year in your freezer (and we’ve used older than that, out of desperation). Alternately, you can buy a kaffir lime tree, which grows well in Austin if you cover it or bring it inside for hard freezes. There’s really no good substitute for its flavor in this soup.

Salt and red pepper flakes (or Sriracha) to taste

Put chicken broth, galangal, ginger, garlic, shallots, lime leaves, lemon grass and curry paste in a large soup pot. Stir and heat over medium-high until just boiling, then turn down to simmer. Simmer for 10 minutes. Add coconut milk and fish sauce, and simmer for 5 minutes. Add sliced chicken, and cook for 5 minutes, or until chicken is fully cooked. When ready to serve, add mushrooms, lime  juice, salt (if needed) and red pepper flakes to taste, and bring back to a low simmer (do not boil). Remove the tougher aromatics prior to serving (galangal, ginger and lemongrass) or instruct those eating it to remove them as they go. Serve with cilantro and extra limes. You may serve over rice or rice noodles.