Right off the bat, I’m going to let you know that I was a bit puzzled when LiveMom asked me to write this post. Do I give off a camping vibe? I wondered. Do I seem like the type of person who likes semi-burned food? Or is this simply because I haven’t shaved my legs for a few weeks and they think I’ve gone full-survivalist?

Well, no matter, because once I started researching food you can cook on sticks over a fire (a stick that’s either found on a tree or at Target). I immediately became intrigued. Then I remembered that I actually own THIS: 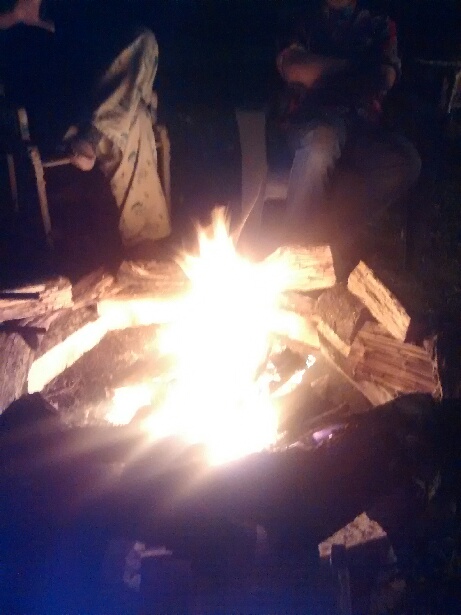 Yep. I have a fire pit in my own backyard! Sure, it’s currently being used as a Dog Poop/Old Pool Toy Reservoir, but that’ll change just as soon as I buy a few roasting sticks and fire up some flame-licked delicacies like these:

CORN ON THE COB

This one doesn’t involve a stick, but rather, tongs. Take your ear of corn and don’t remove the husk, but do remove the silk. Wash, then coat in butter and put the husk back in place. Then wrap in two layers of foil and place at base of fire for 20 minutes. Here are more detailed instructions to follow since we’re dealing with fire here: http://www.ehow.com/how_7733490_roast-corn-campfire.html.

Just kidding about this one. I mean, I know they’re famous from the Christmas song about roasting them on an open fire, but seriously. Who eats chestnuts? Do they even sell them at HEB? Enlighten me, nut people.

The technical definition of shish kabobs is “stuff on a stick.” But, basically, it can be any combination of food that you layer and cook at the same time. Vegetables and meat, all vegetables, all meat, mozzarella balls, fruit, etc. The key seems to be rotating the skewer so it all gets cooked evenly. Recipes for shish kabobs abound on the internet (and I know pre-made ones kabobs are definitely sold at HEB), and here’s a quick primer on how to cook them: http://everydaylife.globalpost.com/cook-meat-shish-kabobs-open-fire-20771.html.

Roasting hot dogs over a fire isn’t exactly new news. I’m pretty sure the cavemen did it before their baseball games. But what if I told you to wrap the weenies in bacon first? Awww, yeah. Related to weenies: any kind of sausage is great to cook over a fire. The key here seems to be holding the weenie near, but not in, the flames until it’s brown.

I found this one on an Australian camping site (http://www.gocampingaustraliablog.com/2013/05/easy-campfire-recipes-that-use-stick.html), and it seems really cool. Cook an egg over an open flame using a stick and an orange—so MacGyver!:

Cut a large orange in half and scrape out the fruit from both pieces. With a sharp knife, cut a small “x” on one orange half about 1 cm below the rim. Cut another “x” just below the opposite rim. Thread a long pointed stick through the cuts so that the orange half hangs like a basket. While someone holds the half peel steady, crack a small egg into it. Grasp the end of the stick and hold the orange shell over the campfire (low flames or embers) for about 10 minutes. Let cool for a few minutes and remove the orange from the stick. Add salt and pepper… and enjoy your egg!

If you don’t already know about this one, you must have just arrived on our planet because every kid has roasted a marshmallow over a campire at least once in his/her life. S’mores are made by sandwiching a roasted marshmallow between two graham crackers and chocolate. But what if I told you there’s something even better? Like S’more Sandwiches with peanut butter and bread? They should really be called S’more D’amn S’more Sandwiches, right? http://allrecipes.com/Recipe/smore-sandwiches/detail.aspx

I’m looking forward to heading out to our fire pit and cooking up a few of these with the kids. Weenies and S’mores—what could be better on a beautiful Austin night? Add a Shiner and I may never come back inside. What’s your favorite fire roasted food?

[author] [author_image timthumb=’on’]http://www.livemom.com/wp-content/uploads/2015/02/wendi.jpg[/author_image] [author_info]Wendi Aarons is an award-winning humor writer and blogger who lives in Austin, Texas with her husband and two sons. In the past few years, she has written for a number of publications including McSweeneys, and for Esther’s Follies, Austin’s famous comedy revue. She is also a writer for US Weekly magazine’s Fashion Police.[/author_info] [/author]
[facebook]
[retweet]