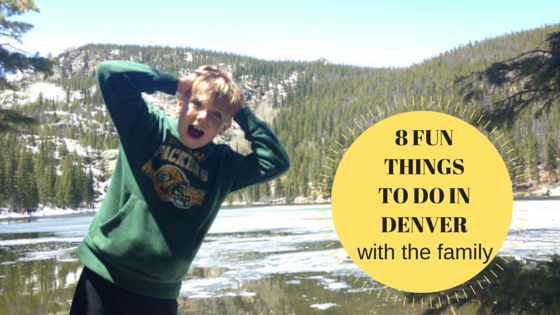 When my husband started looking for a place for our family to go for a long weekend from Austin, all signs pointed to Denver. There are several nonstop flights from Austin to Denver each day, and it’s only an hour and a half plane ride. We soon discovered it’s also one of the cheapest places to fly from Austin. We planned our visit for Memorial Day weekend, since my son had both Friday and Monday off school (Murphy’s Law: after we purchased our tickets, one of the vacation days was taken away because of a “snow” day). We were able to pack a lot into four days with my nine-year old, even though there were many things we’ll have to save for another visit. Here are our favorite 8 things we did:

When we were researching things to do in and around Denver, at first, we thought that Rocky Mountain National Park would be too far of a drive from Denver to be worthwhile. After all, we were only there four days! I’m so glad a few friends convinced us otherwise, even though we could have spent our whole trip at the Park.

We made the hour and a half drive to the first Visitor Center, Beaver Meadows, and the ranger encouraged us to do the Bear Lake, Alberta Falls and Glacier Gorge hikes. Although we knew this would be the most visited part of the park, we had also read that there was plenty of beautiful scenery to go around. The parking lot at Bear Lake was full, so we took the free shuttle, which meant we did wait for a bit and stand for a bit, but it was not too much of a hassle. Bear Lake was simply stunning. In late May, there was plenty of snow in the shady areas, and our understanding was that the rainfall was below average this year. The warmest clothing we had was long sleeves, sweatshirts and hats, but we managed without mittens. The trail is only 0.6 miles, and the terrain is pretty flat (despite navigating around the snow). Our native Texan went crazy, repeating, “SNOWSNOWSNOWSNOW” approximately fifty thousand times during the hike.

Next, we went to the next shuttle stop to hike to Alberta Falls. That hike was 1.6 miles, round-trip, and the waterfall at the end was well worth it. By the time we finished the hike, my 9-year-old had jumped in so many piles of snow that he was soaking wet and cold (yes, we warned him), so he was pretty miserable and we decided to call it a day. In full disclosure, on the way back to Denver he got carsick, which I mention in case you also have a kid who has problems driving up and down windy roads (or if anyone else in your party is prone to carsickness). I was a little sad to drive away, feeling as though we had only explored such a tiny fraction of the park, but the little of what we saw made the trip worthwhile.

We’ve been to plenty of natural history museums, and Denver’s is right up there among our favorites. We had arrived in rainy weather, so this was a great place to spend some time, and it seemed that we barely scratched the surface of all the exhibits. We loved watching the Tiny Giants 3D IMAX movie about the adventures of small creatures (my kid is a rodent fan), and Mythic Creatures, the traveling exhibit, was full of all kinds of interesting things, including a place you could design your own mythic creature. We also enjoyed seeing the mummies, exploring the grounds and checking out dinosaur bones (did I mention we only saw a fraction of what we wanted to see?)

We had several other hikes to choose from, and ended up making the drive out to Red Rocks to check out this natural concert venue that also has trails. The venue closes in the afternoon if a concert is taking place at night, so it’s usually best to visit in the morning. First, we went to take a look at the amphitheater, which was up a steep hill and series of steps and busy with probably a dozen boot camps and others taking advantage of the stairs and altitude to get in some exercise. Once you make it up to the top, you are rewarded with nice views of the surrounding area. We also spent a few minutes in the Performers Hall of Fame (side note: had a proud mama moment when my son shouted, “Hey, Mom! It’s Willie Nelson!”)

Afterwards, we went on the Trading Post Trail, which is a 1.4 mile loop which starts from the park’s gift shop. I’m not quite sure we stayed on the intended trail, as the hike took a bit longer than I was expecting, but then again, we weren’t in a big hurry. Along the way, we spotted a few bunnies and some cool-looking birds. One of the nicest parts of our hike? Totally free!

My son is a huge football fan, so I had the idea to take a tour of Mile High Stadium, aka Sports Authority Field at Mile High. A few years ago, we took a tour of DKR Stadium here in Austin, so I was curious about how different this would be. Tours are 75-90 minutes, and it’s recommended that you make reservations in advance. I was relieved when I called on the day of our tour on a holiday weekend and was still able to make a reservation (I didn’t have to pay in advance, but paid on site). You also get to see the Colorado Sports Hall of Fame & Museum, which is where the tours start. We even got to go down to the field at the end of the tour, although we couldn’t actually step on the field. Our guide was excellent, and I quickly realized that there was so much more to see in a pro stadium than a college stadium. Although it was a bit long for my 9-year-old, the tour was packed with a lot of information which was new to me about the team, the league and the business of pro football, all which I found to be very interesting. Tours take place all year round, although they do not take place the day before home games and other large stadium events.

#5: Stroll through the Denver Botanic Gardens

I read that the Denver Botanic Gardens was a good place to visit, and that there is a special Children’s Garden on top of the parking garage. We headed to the Children’s Garden after finding parking on what turned out to be a gorgeous day. I was very impressed with the Children’s Garden, which made great use of the rooftop. There were a lot of places kids could be hands on: there was a bridge to walk across to get a bird’s eye view of the garden, there were stations with natural materials to build and participate in imaginary play, there was a stream to splash in, there was a stage to present your own play, there were picnic areas to have a snack or lunch and there was a pond to observe aquatic life. My kid made a friend and proceeded to play tag in the garden while my husband and I checked everything out.

After we were done, we crossed the street to the main gardens. We started in the tropical conservatory and then walked through the Perennial Walk. We spent a good deal of time in the Science Pyramid, and also took a cue from other visitors to take a break to sit on the inviting grass at the amphitheater. I think it was at this point when I realized this was the most extensive botanical garden I had ever visited. There would be no way that we could see it all in one visit, so we walked along the perimeter and stopped again at the Ellipse to check out the Chihuly sculpture, the birds and bees walk, the water gardens and the herb garden. After we wrapped up our visit, we stopped at Liks Ice Cream nearby for a sweet treat.

#6: Go to a Colorado Rockies game

In Austin, we have no pro sports teams. In Denver, there is a pro football, basketball, hockey and baseball team, in addition to several lacrosse teams and college teams. My son had never been to a pro baseball game, so we decided to try to make a Rockies game. The stadium is right downtown, so we were able to walk from our hotel, which was nice. The Sunday we were in town, there was a doubleheader, but there was a freak hailstorm that day, so the early game was delayed and we realized that the second game wouldn’t start until well after 8pm. Since Colorado is in a different time zone, it didn’t seem like a great idea to have a late night after a day full of activities. Since we wouldn’t probably stay for an entire game, we decided to go for the last part of the first game. We were able to get $4 tickets for standing room only and could stand in a pretty awesome spot (see above). We bought a hot dog for my son and settled in to enjoy the game. Unfortunately, our kid just wasn’t into it, and wasn’t interested in standing after the mile-long walk from the hotel, so our outing wasn’t very long. Despite the fact that it was a quick outing, it’s a nice stadium with lots to do and see, so I’m still glad we checked it out (and the price was right!)

There are only so many museums and hikes you can expect a 9-year-old to do in four days, so we took a break on our last day to spend some time at City Park, which is a large green space close to downtown and which has the Denver Zoo and the Museum of Nature & Science inside of it. We walked a bit around the park and heard loud bird noises. We came upon a small lake with an island filled with black birds. It turns out that cormorants take over the island during this time of year to make nests. Then we hung out on the playground, which reminded me of the former Creative Playscape in Georgetown and Children’s Park in San Marcos. There were plenty of kids hanging out on the playscape, but there was so much to do that it didn’t seem crowded. We spent half an hour exploring all the different parts of the playscape and could have easily spent longer.

We needed to get a gift for our neighbors, who were taking care of our animals while we were gone, so we made a stop at Tattered Cover Book Store‘s largest location on Colfax. Tattered Cover is Denver’s BookPeople, an independent bookstore with tons of inventory. The bottom level has the kid’s section, and my son could have spent hours checking out all the titles. In addition to books, the store had a cafe.

Four days was a great amount of time for our first family trip to Denver. I’m already ready to go back and spend four more days there!

What’s your favorite thing to do in Denver with your family?